Russian gas export monopoly Gazprom is struggling to meet extra demand from European customers shivering through a severe cold snap, even after ramping up investment and borrowing to boost output.

"Some requests are higher than we can put in the pipe," a company source said. "Requests for gas have been higher for more than a week."

Gazprom supplies about a quarter of Europe's gas, and cuts to deliveries in the past, mainly over pricing rows with transit countries such as Ukraine, have raised concerns over the security of supply from Russia.

Gas industry officials in Europe said stored supplies and imports from Russia and Norway were meeting the spike in demand for heating.

The cold front has been blamed for more than 40 deaths in Ukraine alone, and Moscow is expected to face temperatures averaging minus 20 Celsius for the next 10 days.

Gazprom, which on Wednesday reported a 4-per-cent drop in quarterly profit as a result of one-time foreign exchange losses as it took on debt to finance expansion, said it was honouring long-term contracts with European clients after reports of restricted supply.

"Despite increasing gas consumption in Russia due to heavy frosts, Gazprom continues implementing its contractual obligations to European clients," it said in e-mailed comments.

At the same time, clients in debt-stricken Europe are increasingly demanding price cuts in long-term supply contracts whose terms are largely indexed to oil prices.

But the Russian monopoly, Russia's top producer, has not agreed to the requests of its major clients, although it agreed to "adjust" prices for some customers.

The European Commission on Tuesday said that gas supplies into Italy via the Austrian border had been reduced by 10 per cent compared with normal levels. It also has said it had enough natural gas to make up for any shortfall and was confident demand could be met.

For its part, Gazprom said the Blue Stream underwater pipeline to Turkey is pumping at full capacity, while gas flows via Yamal-Europe pipeline, which has an annual capacity of 33 billion cubic metres (bcm), have been increased by 20 per cent from last week.

"In order to fulfill export obligations, the company has involved all the gas-exporting routes and significantly increased offtake from its underground storage facilities in Europe," it said.

Russia supplied Europe with 150 bcm of gas last year and expects to increase that to about 164 bcm in 2012.

It said foreign exchange losses were linked to the ruble weakening and stood at 145.7 billion rubles in the third quarter, compared with a loss of 38.3 billion in the 2010 period.

The company has been ramping up investments to bring on stream its huge Bovanenkovo field in the Arctic Yamal Peninsula and lay a new pipeline to export the field's gas to Europe.

Meanwhile, it has failed to wrap up talks on exporting gas to China and is widely viewed as underestimating the competitive threat posed by the shale gas boom that has made the United States self-sufficient in gas.

"The debt has risen substantially, but the burden is sustainable," UniCredit Securities analyst Artyom Konchin said.

"They missed the opportunity to enter the Chinese market, and central Asian producers are now two steps ahead there. To me it is a clear negative. But they ... control the largest and most prolific gas deposits today, and they should be able to extract and deliver them to key markets reasonably efficiently."

A company official told a conference call with investors that Gazprom expects to receive renewed proposals from China soon.

"The [financial]results look bad. Gazprom had negative cash flow of $1.5-billion in the third quarter due to an increase in capex to $14.5-billion," UBS analyst Maxim Mashkov said.

"I would expect negative cash flow for the whole year. This would be bad for shares and dividends."

Gazprom expects to increase capital expenditures in 2013 to 1.75 trillion rubles from a planned 709 billion in 2012 as it starts development work on new fields in East Siberia.

The company reported third-quarter revenue of 949.6 billion rubles, up from 779.3 billion rubles in the same period a year ago, in line with forecasts. 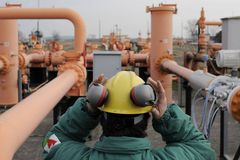 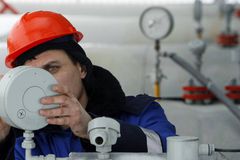