Greece has threatened to default on debt repayments – a move that could easily push it out of the euro zone – to free up enough cash to pay for wages and pensions.

The admission over the weekend by several Greek government ministers that the country was close to financial collapse and could in no way satisfy both its official creditors and public employees sent the euro and Greek bank shares tumbling on Monday.

As the odds of default rose, some economists set out scenarios that would see Greece issue a parallel currency that would allow the government to make payments to public employees. A parallel currency, perhaps in the form of IOUs, might preserve euros for payments to international creditors, theoretically allowing Greece to stay inside the euro zone.

Various Greek ministers used TV appearances over the weekend to stress that Greece was tapped out and urge the European Union and the International Monetary Fund to compromise on austerity demands. The IMF alone is owed payments of €1.54-billion ($2.08-billion) in June. At the same time, the government must find billions more to pay interest on sovereign bonds, and the salaries and pensions of civil servants. It must also make a €3.5-billion payment to the European Central Bank in July.

"The money won't be given.… It isn't there to be given," Interior Minister Nikos Voutsis told the Greek TV station Mega on Sunday.

As both sides appeared to harden their negotiating stances, economists said chances of a Greek default and possible exit from the euro zone – dubbed Grexit – were climbing even if many of them thought a last-minute compromise would be found.

In a Monday note, the French bank Société Générale said it put the chance of a Greek default at 40 per cent. Its economists said that missing a payment to the ECB would be more risky than missing one to the IMF, since the ECB is providing emergency liquidity assistance (ELA) to Greece's ailing banks. "The question then becomes whether Greece could default on the ECB and still enjoy ELA access and thus secure liquidity for its banks," Société Générale said. "Without this, Greece would be forced to leave the euro."

On Monday, Gabriel Sakellaridis, spokesman for Greek Prime Minister Alexis Tsipras, said the government will pay salaries and pensions at the end of this month, but would not confirm or deny that a payment of about €300-million to the IMF in early June would go unpaid.

"This government has the responsibility to pay its obligations, both within Greece and externally," he told reporters. "The liquidity problems are well known. We want to honour our obligations and that's exactly why we're seeking this agreement soon."

Greek banks took a beating Monday on the Athens stock market. Piraeus Bank lost more than 6 per cent, taking its one-year loss to 75 per cent, as the deposit flight continued. National Bank of Greece lost 4 per cent, for a one-year loss of 49 per cent. The overall Greek market was down 3.1 per cent. The Italian, Spanish and Portuguese markets also fell (some European stock markets, including those in Germany and Britain, were closed on Monday for holidays).

Grexit fears continued to weigh on the euro, which last Tuesday had one of its biggest one-day falls in four years. The euro was down 0.34 per cent against the U.S. dollar.

While the apparently co-ordinated effort among Greek ministers to use TV appearances to highlight their country's financial distress was evidently a negotiating tactic, there is no doubt that the country is effectively bankrupt. Earlier this month, Greece did manage to scape together a €750-million payment to the IMF but was able to do so only by draining its own reserve account at the IMF.

On Sunday, Finance Minister Yanis Varoufakis used the BBC's Andrew Marr Show to ask the EU and the IMF to cut Greece some slack. "Greece has made enormous strides in reaching a deal," he said. "It is now up to the institutions to do their bit. It is not in their interest as our creditors that the cow that produces the milk should be beaten into submission to the extent that the milk will not be enough for them to get their money back."

If Greece reaches a deal with the IMF and the ECB in the next few weeks, Greece would receive €7.2-billion in loans left owing from the previous bailout program, which was extended by four months shortly after the radical left Syriza party was elected in late January. The party swept to power on a promise to end the austerity programs that the EU, the IMF, the ECB and the German government insist must stay in place if Greece is to receive fresh assistance. 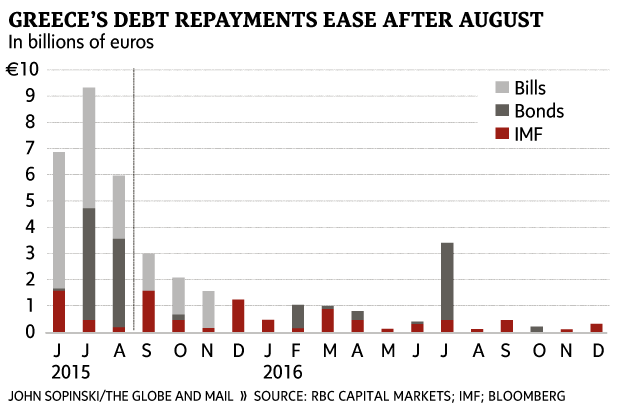 Merkel, Hollande tell Greece no way around satisfying creditors
May 22, 2015 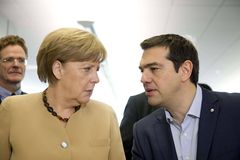