The Sword of Damocles hangs over Greece. Will the country stick with the euro?

The question is of vital importance not so much for the integrity of the euro zone, but for investment flows into Greece. Bailouts alone will not fix Greece. They do not make Greece more competitive. They buy time, and ever shorter periods of time, as the recession deepens, speeding up the government's cash burn.

As long as it's an open question whether Greece stays put, no foreign company in its right might would commit, say, to the construction of a factory or port or design centre in Greece. Putting in euros and taking out devalued drachmas is simply throwing good money after bad. The new drachma would be issued at parity to the euro and instantly fall by 50 per cent. Some economists think a 70-per-cent drop is the more realistic figure.

And it's not just foreign companies who are terrified of the drachma. So are Greek companies. Investing in euros today and selling overseas in drachmas tomorrow is not exactly an appealing idea. In the meantime, Greek companies are suffering because Greece itself is considered a toxic risk. They can't get letters of credit, loans and trade insurance because they are registered in a country that is apparently hurtling toward the euro zone's exit, or bankruptcy, deep depression, or all three.

So how could Greece come back from the dead? For three years, absolutely no one – not the European Union, not the International Monetary Fund, the European Central Bank nor any number of finance ministers – has come up with the right combination of financial firepower, fiscal restraint and growth plans to stem the rot in Greece. A European leaders' summit next week will give it another shot as the crisis juggernaut rumbles on, threatening to flatten Italy and Spain, the euro zone's third- and fourth-largest economies.

Here's one idea: Assure that Greece, no matter what hell it goes through, will stay inside the euro zone. That would go a long way to assure foreign companies that betting on Greece is not the equivalent of playing Russian roulette with five of the six-gun's bullet chambers loaded.

Doing so would not rule out Greece defaulting on its massive external debt (the country has a debt-to-gross national product ratio of 160 per cent, Europe's highest). Greece did that already within the euro zone. In February, it effectively defaulted when, through a "voluntary" debt restructuring delivered to private bondholders, it knocked €100-billion ($130-billion) off its debt load. Another debt restructuring is all but inevitable, barring a miraculous return to growth. As Greece's GDP shrinks under the austerity programs, the denominator in the debt-to-GDP ratio shrinks, boosting relative debt.

Whoever doubts the advantages of assuring Greece's ongoing use of the euro might want to consider California. The state, which would be the world's ninth-largest economy if it were a sovereign country, is close to bust. Its projected annual budget deficit is $16-billion (U.S.), against the $9-billion projection made in January. Unemployment is 11 per cent and it has the lowest credit rating of any American state.

Yet California trundles on, supported by the federal government's implicit guarantees and transfers such as Medicare and Medicaid payments. Companies considering investing in California do not have worry about the state leaving the union and printing its own currency. Silicon Valley is thriving.

Alberta defaulted on its bond payments in the mid-1930s and managed to stay within Confederation, with a little help from its friends in Ottawa. So there's a Canadian precedent, too.

Of course, if the EU, that is, Germany, were to make assurances that Greece and the euro are inextricably linked, Greece might have to pay an even bigger price than it has already. The troika – the EU, ECB and IMF – are effectively in control of Greece's finances. The former two doled out the bailout loans and the latter has pumped liquidity into the Greek banks for fear that a bank run would utterly destroy them.

Full-blown sovereignty loss might be the price Greece would have to pay to assure it would remain. Under the current bailout programs, Greece still has considerable flexibility in deciding where the bailout loans go, even if it had to make austerity commitments. You can bet the EU and the IMF would want line-by-line oversight on budgets in exchange for a full-blown effort to keep the drachma at bay. This might mean, for instance, deciding that keeping hospitals open would take priority over keeping Greece's bloated civil service largely intact.

The total loss of budget sovereignty might be unacceptable to the Greek parliament and the Greek people. But exodus from the euro zone could be worse, isolating its economy on the fringes of Europe. Greece needs investors to create jobs and tax revenues. If the foreign companies know the drachma is not coming back, they might take the investment risk. If the investors do not return, Greece is doomed to endless bailouts, or worse.

Merkel must bend a little or risk a total collapse
June 21, 2012 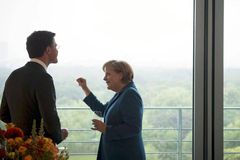 A new government for Greece, but no new austerity deal
June 20, 2012 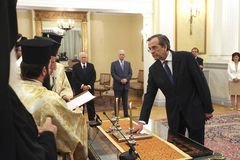 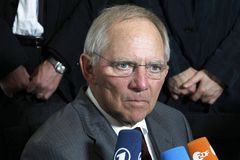