Sir Terry Matthews made a fortune in the technology sector with a string of companies including Mitel Corp., Corel Corp. and Newbridge Networks, which he sold in 2000 for $7-billlion (U.S.) in stock. Now, Sir Terry is returning to his roots in Wales for what may be his greatest challenge yet: trying to revive Britain's largest steel plant.

Sir Terry has created Excalibur Steel UK Ltd., and he's rounding up investors to buy the troubled Tata steel mill in Port Talbot near Swansea. Tata put its British operations up for sale in March, saying the division, which includes three steel-making facilities, was inefficient. The Port Talbot plant is the largest, employing roughly 15,000 people directly and indirectly.

The challenge for any buyer is daunting. The integrated plant, which makes strip steel used in auto manufacturing, construction and appliances, is outdated and losing about $2-million a day. Energy costs are twice as high as elsewhere in Europe and steel prices have plummeted because of oversupply from China.

"I've never been one to shy away from some kind of a fight," Sir Terry said in an interview from his office in Ottawa. He added that he chose the mythical name Excalibur deliberately because it's "a sword that was invincible."

Sir Terry, 72, is convinced the plant can be turned around and he points to a restructuring plan that was rejected by Tata officials because it involved nearly $200-million in upgrades.

"In my view, everything I've heard says that a turnaround plan could work well," he said, adding that the operation could be profitable in two years. "I would say steel is a critical and strategic item in the U.K."

The buyout effort has won support from Welsh officials and the British government, which is pledging financial assistance and a 25-per-cent ownership stake. Local Tata management is also onside and Sir Terry has help from his long-time business partner, Roger Maggs, a former Alcan executive who is also from Wales and ran a Canadian venture capital company founded by Sir Terry in the 1990s.

Sir Terry is revered in southern Wales, where he was born and raised. While he left for Canada in the 1970s and built a career as a successful entrepreneur, he is deeply involved in the area. He owns a five-star resort near Cardiff, chairs a regional development board in Swansea and has invested in 10 tech startups. He's constantly hailed in the local press as the first billionaire from Wales and he was knighted in 2001.

"He's got a big commitment to this area and he knows his way around finance," said John Warman, 71, who spent 30 years as a maintenance worker on the blast furnaces at the Port Talbot plant and is now a town councillor. "We're fully supportive of trying to make Port Talbot a success," he added. "I still feel there's a future there and a lot of other people in Port Talbot do as well."

Mr. Warman said the steel plant is the heart and soul of Port Talbot, which has a population of 45,000 and has been the epicentre of the British iron industry for hundreds of years, thanks to the abundance of metallurgical coal in the region. "This area of Wales is a close-knit community," he said. "Nearly everybody over the years has had somebody working at the works, their father, grandfather, uncle, aunt."

Steven Phillips, the chief administrator for Port Talbot who is working on the Excalibur effort with Sir Terry, said closing the plant would ruin the economy. "We know the scale of the challenge, but we also know the potential impact that it will have, not only on Port Talbot but I am talking about the whole of the South Wales economy," he said.

Even so, saving the mill won't be easy. Tata recently sold a plant in England for just £1 ($1.45) to an investment firm that's promising to invest $700-million in the facility in return for wage cuts and changes to the pension plan. And so far, no firm bids have surfaced for Port Talbot.

"I'd be the first to admit it's not entirely a coherent picture at the moment frankly," Mr. Phillips said, referring to the Excalibur plan. "We've only been going less than a week."

None of that fazes Sir Terry, who has been invigorated by the battle to keep the plant open. "People are fighting back as a team," he said emphatically. "And I like that." 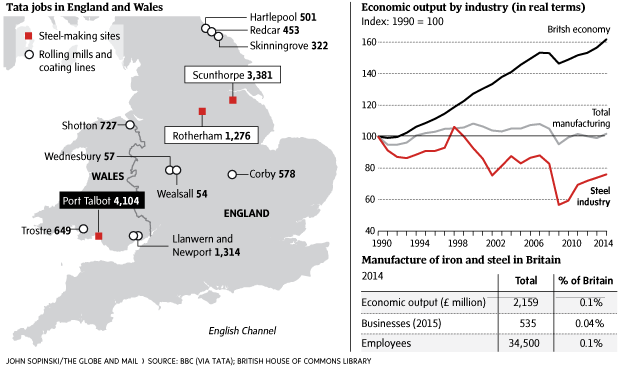 View more suggestions in Following Read more about following topics and authors
Follow Paul Waldie on Twitter @PwaldieGLOBE
Report an error Editorial code of conduct
Due to technical reasons, we have temporarily removed commenting from our articles. We hope to have this fixed soon. Thank you for your patience. If you are looking to give feedback on our new site, please send it along to feedback@globeandmail.com. If you want to write a letter to the editor, please forward to letters@globeandmail.com.
Comments