One of the biggest scandals in recent automotive history began two years ago with a single Volkswagen Passat rumbling up and down the highways of the Pacific northwest.

It was a test – a routine one, at that. In 2013, a U.S. group called the International Council on Clean Transportation (ICCT) decided to find out if a number of popular diesel-fuelled vehicles really performed as well in the real world as they did on government-mandated emissions tests. To find out, the group contacted researchers at the Center for Alternative Fuels, Engines and Emissions at West Virginia University – a worldwide pioneer in emissions testing. They decided to test three cars: a VW Jetta, a VW Passat and a BMW X5. Researchers drove the cars around various urban centres in California, and for about 4,025 kilometres along the highways between California and Washington State.

When the results came in, they at first thought they'd made some kind of testing error. The BMW performed at or below government-mandated emissions levels. The VW vehicles, however, put out emissions that were sometimes 35 times greater.

Soon it became clear – the VW cars had been outfitted with a device specifically designed to cheat emissions tests, producing stellar results in the lab even as the same vehicles performed miserably in the real world.

Now, what began as a minor emissions experiment has resulted in a scandal that has cost VW's chief executive officer – the highest-paid executive in Europe – his job, and stands to cost the company itself tens of billions of dollars in lawsuits, settlements and possible criminal investigations. It has also thrown a little-known not-for-profit into the spotlight.

Started in 2001, the ICCT was founded on the premise that emissions constituted a global problem for which there existed, for the most part, only local solutions. It's funded by a number of deep-pocketed institutions – including the ClimateWorks Foundation and a funding body set up by one of the founders of the PC giant Hewlett-Packard. In the last decade, it has conducted emissions testing and agitated for stricter regulations in Europe, North America and Asia.

A few years ago, the group was studying emissions results from diesel cars in Europe. Researchers were concerned that many diesel vehicles seemed to have much higher real-world emissions than lab testing results would suggest.

So they decided to test a few vehicles themselves – not in Europe, but in the United States.

"One of the hypothesis we had was that, because the U.S. regulations on emissions are much stronger than the European ones, the U.S. emissions values would be lower," says Anup Bandivadekar, ICCT's passenger vehicle program director.

The group gave the West Virginia University engineers $50,000 (U.S.) to test the hypothesis. The next logical step would then be to study what made the U.S. diesel cars perform better, and lobby European governments to mandate the same technology on European cars.

The BMW test at first seemed to confirm the group's theory. Then the VW results came in and threw the entire project for a loop. Suddenly, researchers were scrambling to figure out how the company's real-world emissions were so many times greater than the ones observed in the lab.

Even though the West Virginia University researchers made their findings public more than a year ago, it wasn't until this month when the scandal became worldwide news.

The company was thrown into turmoil this week after the U.S. Environmental Protection Agency (EPA) said VW allegedly installed "defeat devices" on many of its diesel vehicles. VW has admitted the devices may be installed in as many as 11 million cars – a total that, under average driving conditions, could have resulted in hundreds of thousands of tonnes of extra nitrous oxide in the air every year.

"Using a defeat device in cars to evade clean air standards is illegal and a threat to public health," said Cynthia Giles, assistant administrator for the EPA's Office of Enforcement and Compliance Assurance.

"Our goal now is to ensure that the affected cars are brought into compliance, to dig more deeply into the extent and implications of Volkswagen's efforts to cheat on clean air rules, and to take appropriate further action."

Shares of VW have lost about a third of their value since this time last week, as the company stands to spend upwards of $18-billion on settling the investigations and complying with regulators' demands.

In addition, a Chicago-based law firm has filed a class-action lawsuit against the company, arguing that, among other things, the reality of the VW emissions makes the company's claims that the vehicles are "clean" and "green" fraudulent, and that the cars are now far less valuable.

VW has already said the scandal will result in deep cuts to this year's profits. But the company's pain may be just beginning. In addition to myriad regulatory and private legal action in the U.S., the car maker also faces a potential criminal investigation in Germany.

A vehicle recall is now under way, involving some 482,000 vehicles in the U.S.

Researchers involved with the study that initially discovered the problem say the fix isn't overly laborious. It may involve a slight tweak to the cars' fuel-injection system.

"The BMW vehicle's performance on the in-use tests shows that the technology needed to meet the U.S. motor vehicle air pollution emission standards for diesels is available," said Francisco Posada, a senior researcher with the ICCT.

But for VW – now caught in what appears to be a deliberate attempt to cheat regulators – a quick fix no longer appears to be an option. Under the Clean Air Act, the U.S. government can fine the company up to $37,500 for every vehicle affected.

Given the number of cars involved, that could mean an $18-billion fine – more than the company's profit for all of last year. 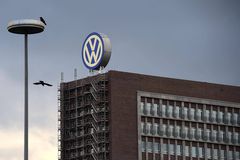