Investors in this part of the world are busy placing their bets on the fiscal cliff, Chinese growth and RIM's survival prospects. It's understandable if they are no longer paying much attention to the events unfolding in Europe.

What is perhaps more surprising is that European investors and business people are also starting to take a ho-hum attitude to the never-ending Greek debt saga, the social unrest spreading across the European austerity belt and the widening divisions between the haves and have-nots of the European Union.

European stocks posted their best week in almost a year.

Yields on 10-year Greek bonds fell to levels not seen since the debt restructuring last spring. Spanish yields also declined and the euro climbed to a three-week high against the greenback. German business confidence rose, confounding the experts.

Still, not even the latest downgrade of French government debt or a recent harsh cover story on France in The Economist ("The time-bomb at the heart of Europe") had a noticeable impact on renewed enthusiasm for French bonds.

This "relative return of confidence in the prospects for the euro area" is entirely justified, European Central Bank chief Mario Draghi told a banking conference in Frankfurt Friday.

That's a rather bold statement, considering the state of the regional economy and the fact that European leaders can't even agree on the EU's next budget.

Meanwhile, euro-zone finance ministers and the International Monetary Fund were still wrangling over the conditions of a deal to release the next critical loan instalment to insolvent Greece.

"If they cannot resolve it, then Greece will declare bankruptcy. But the risk is not very high," assures Thomas Mayer, an outspoken former chief economist with Deutsche Bank and still a senior adviser to the bank.

"It is now a poker game, and in the end, everyone will give way a little. Everyone will suffer some loss of face. But the pain will be distributed, such that there will be no clear winner."

A key sticking point has been whether euro-zone governments should bite the bullet and write off part of official loans to Greece, cutting interest rates and extending debt maturities – in effect taking the sort of haircuts imposed earlier this year on private-sector lenders.

Germany, the biggest creditor, has rejected any such debt relief. But governments will have to absorb the losses eventually, says Dr. Mayer, senior fellow with the Center for Financial Studies at Goethe University in Frankfurt.

"You have to be an extreme optimist to think that Greece will be able to repay debt that is likely to reach 190 per cent of its GDP next year."

His own assessment is that the whole Greek rescue effort may well come unglued in the next year, particularly if the weak ruling coalition in Athens crumbles and a new government abandons the austerity drive.

But this doesn't have to mean the end of the euro for Greece, let alone the rest of the monetary union.

His own intriguing solution for preserving the currency bloc and Greece's place in it involves setting up parallel currencies that would function alongside the euro in both stronger and weaker economies.

If, for instance, the opposition Greek leftist Syriza party manages to convert its current lead in the polls into victory in the next election and abandons the enforced budget slashing, it would not be able to beg or borrow enough euros to cover its expenses.

But it could conceivably issue its own IOUs and still retain the euro as a store of value, Dr. Mayer suggests.

People would want to trade this "bad money" – which he labels Geuros – as soon as possible for domestic goods and services while holding on to their euros or "good money."

But who would accept the devalued scrip? He tells me to think of vegetables. The local grocer might refuse to accept this form of payment at first. But if the alternative is for the unsold produce to spoil, eventually the proprietor will give in and accept the parallel currency, which would go into circulation.

He suggests that a middle tier of countries, including France, Italy and Spain, might opt to keep the euro as both a medium for transactions and a store of value.

Those in the stronger upper tier of the currency union, including Germany, the Netherlands and Finland, would still use the euro for transactions, but would likely create their own virtual currencies as a means of safeguarding wealth.

Such a mutation of the existing monetary arrangement "would seem to me more likely than its entire disappearance," he says in his latest book, Europe's Unfinished Currency (Anthem Press).

"Some of the more euro-skeptical policy circles are not agreeing, but at least they are listening." But the pro-euro policy crowd has a different response, calling it "a lunatic idea that only an economist can think of." 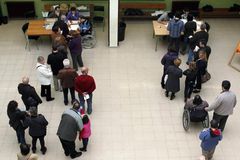 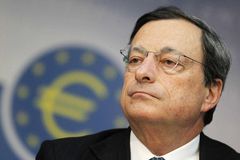 After latest round of bailout talks, Greece still in limbo
November 21, 2012 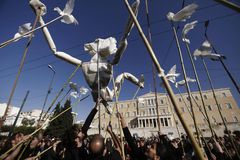