Canada and its soft-power image are on a roll in Europe.

More evidence came this week in Rome and Milan, where Canadian government-sponsored education fairs aimed at recruiting Italian students for Canadian schools. Judging by the Italians' reaction, they would all leap the Atlantic tomorrow if they could afford the hefty tuition and boarding costs.

To them, Canada is the promised land; Italy is opportunity hell for students and job-seeking young adults. The Italian brain drain may be tragic for Italy, but it's a gift for Canada. Unlike Brexit-bound Britain and Donald Trump's vision of America, Canada has no intention of shutting its borders.

The Rome fair, at a convention centre in the historic core, was packed with Italian parents and their offspring. They went from table to table, sampling the offerings from schools ranging from Ontario's University of Waterloo and Fanshawe College to the Canadian Rockies Public Schools board in Alberta and Vancouver Island's Sooke School District. Of course, the Alberta and British Columbia schools, with their cheery brochures depicting kids flying down mountains on snowboards or paddling canoes on glacier-fed lakes, were especially popular.

Canadian universities have run marketing campaigns in Europe for decades. In recent years, the high-school boards have become more prominent, a reflection in part of European parents' desire to land their children in English-speaking universities as postcrisis job prospects evaporate across Europe, especially in the paralyzed Mediterranean countries.

Visitors to the education fair in Rome were – surprise – greeted by a cut-out of a Mountie. Farther down the hall was a blow-up of a full-page article, carried in the Italian business newspaper Il Sole 24 Ore, with the headline "Canadian colleges at the top for work." It reported that 91 per cent of students in Canada find jobs within six months of graduation. The figure seemed suspiciously high, but would be a dream for Italians even if it were 30 points lower.

One Italian student who made the leap was Gregorio Melchiorri, 18, who speaks near-perfect English after attending Grade 11 in the Sooke board and living with a local family (the bill for tuition and board was about $22,000).

"Learning English was so important for my future," he said. "There is no employment here in Italy. I will have to go abroad to find work."

Christopher MacPhee, superintendent of the Canadian Rockies board, says his schools have traditionally recruited German and Spanish teenagers but expects more interest from Italians because of Italy's jobless, slow-motion recovery.

"The parents realize how dire their economic situation is," he said. "The cultural and language acquisition in Canada is so important to their kids' futures."

The Italian job market is still a disaster, eight years after the financial crisis. Unemployment rose to a seven-month high of 11.7 per cent in September, up from 11.5 per cent in August. Youth unemployment – at 37.1 per cent – is appalling and does not reflect the despair in the southern half of the country.

In Sicily, the youth jobless rate is 56 per cent and young men and women with postgraduate degrees are lucky to find menial work, with no benefits or contracts, in restaurants or shops. Almost all of them live with their parents because they can't afford rent. The small number with well-off parents can afford to leave the country to find jobs. Greece and Spain are the only European countries with higher youth unemployment.

Italians are leaving en masse. According to the national Registry of Italians Resident Abroad, more than 107,000 Italians emigrated in 2015, up 6.2 per cent from the previous year. Almost 37 per cent were in the 18-34 age group. Traditionally, it was Southern Italians who hit the road. As jobs disappear throughout Italy, even young people from the relatively wealthy north are leaving.

The Italian press is full of "brain drain" stories and accounts of postgraduate laureates driving cabs or worse. Six years ago, Norman Zarcone, an accomplished 27-year-old PhD student, committed suicide at the University of Palermo, apparently because of his inability to obtain even low-level employment and recognition in the academic world. His death made him the symbol of chronic youth unemployment in Italy.

Italy's loss is Canada's gain. Italians and other Europeans in high-unemployment countries have traditionally gone to schools in Britain, if they were wealthy enough to afford the high fees charged to non-British students. Brexit – Britain's exit from the European Union, probably in 2019 – is effectively removing Britain from the foreign students' school shopping list, all the more so since Brexit seems to be driven by the country's desire to clamp down on immigration.

Canada may not be any cheaper for foreign students than Britain, but it appears more welcoming to them and is certainly getting some encouraging press as Prime Minister Justin Trudeau radiates his jaunty optimism.

Gregorio, the Italian student who spent a year in the Sooke school, didn't return to Canada this year. He couldn't afford to. But his lone year abroad changed his life for the better, he says.

"What a great country," he said. "It was such a good escape from my ordinary Italian life and I can speak English." 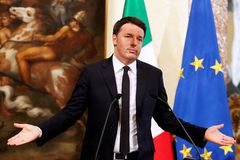