When the London Stock Exchange Group PLC and Deutsche Boerse AG unveiled their $38-billion merger last year, executives insisted the deal would go ahead despite Britain's decision to leave the European Union. But Brexit has now become a major stumbling block to the merger and opposition to it is rising in Frankfurt and London.

The merger was supposed to create a European powerhouse, bringing together the continent's two largest exchanges in a new entity that would have more than 3,200-listed companies and could rival ICE, the U.S. giant that owns the New York Stock Exchange. But with Britain about to begin pulling out of the EU next month, many officials in Germany and Britain are calling for the deal to be scrapped or substantially changed.

On Sunday, the merger hit another roadblock when the LSE announced that it couldn't meet the demands the European Commission which required the exchange to sell its majority stake in MTS, an electronic trading platform for European government bonds and other fixed income securities. The LSE said it couldn't commit to a sale of MTS and that as a result the "Commission is unlikely to provide clearance for the merger."Nonetheless the LSE said it would "continue to take steps to seek to implement the merger."

Meanwhile, politicians in the German state of Hesse, which includes Frankfurt, are threatening to veto the merger over its plans to base the new exchange in London and have an office in Frankfurt. They argue that it's inconceivable for Europe's largest stock exchange and clearing house to be based outside the EU, especially since the new exchange will be 54-per-cent owned by Deutsche Boerse and run by the Boerse's current chief executive, Carsten Kengeter.

She said state officials are expected to begin reviewing the merger this summer, a few months after the European Commission gives its decision in April, and they have the power to kill the deal. Several other politicians in Wiesbaden and Frankfurt have also expressed concern about the merger and indicated they won't support it if the headquarters remain in London.

"To my mind, there can't be a fusion where the seat is in London," Frankfurt Mayor Uwe Becker said in an interview. Mr. Becker said he supports the business principles behind the combination, but he has urged state officials to push for the head office to be moved to Frankfurt. "There are good arguments to say that that a bigger stock exchange would be for the benefit [of] all. But the benefit shouldn't look like having a seat on the island," he said.

Frankfurt has launched a major effort to bolster its position as a financial centre in the wake of Brexit. City officials are trying to lure London financial firms that will have to relocate some operations once Britain leaves the EU. After Brexit, British-based financial institutions will lose so called "passport privileges" which allow them to operate in every EU member state. Several studies have said that as a result up to 40,000 financial-services jobs will have to move out of London to another EU country.

Frankfurt officials are hoping to cash in on those jobs, pointing out that the city is already home to the European Central Bank and nearly 200 foreign banks. Basing the merged LSE-Deutsche Boerse exchange in the city would be a major coup.

LSE chief executive Xavier Rolet has insisted that "the deal is set" and that any change to the head office location would require another shareholder vote. "I do believe in the end it is in Europe's interest to clear this transaction and I do believe it will be successful," he told The Globe and Mail last fall.

Mr. Kengeter has been trying to win over German politicians and last week he and other Deutsche Boerse officials held a reception in Wiesbaden for Hessen state officials. However, his position has been hampered because of an investigation by Hesse officials into allegations he illegally traded Deutsche Boerse shares before the merger was announced. Mr. Kengeter has denied any wrongdoing.

Concern about the merger is also increasing in Britain. Last week, Members of Parliament debated the deal and some have called for it to be blocked.

They worry that because the new exchange will be controlled and managed largely by Germans, they will begin to take away key businesses that are run out of London, especially euro-denominated clearing. London handles roughly 75 per cent of all euro transactions with an average daily value of $750-billion. And most of that is processed through the LSE's LCH clearing house.

"It is a slam dunk that the merger is not in the national interest," Tory MP Sir Bill Cash told the House of Commons during last week's debate. "Both the German and French governments have indicated a wish to strip euro clearing out of [London]. All of this has significant political involvement because it will facilitate in due course a substantial movement of U.K. market infrastructure to the continent and would permit Germany and France, in the context of the Brexit negotiations, to achieve German and French objectives which would undermine the U.K.'s political leverage during those negotiations."

A group of 40 business people also signed a letter calling on the government to block the deal while Britain negotiates its exit from the EU. The LSE is a "national asset," they wrote, and as a result of the merger "the commercial logic would be for the new owners to build on London's reputation, but the political risk is that the U.K. is forced to cede control to Frankfurt."

On Monday, a spokesman for British Prime Minister Theresa May said the proposed merger is a commercial matter for the companies involved. 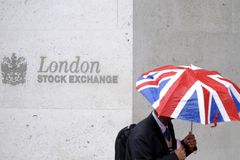