Rupert Murdoch's decision to split the media empire he has led for 60 years has nothing to do with a desire to hand the business to his children or the U.K. phone hacking scandal, News Corp's 81-year-old chairman and chief executive said in an interview on Thursday.

"This has nothing to do with family succession or anything like that," he told the Financial Times when asked about speculation that Lachlan, his eldest son, could lead the new publishing company.

"Yes, as a father, I'd like to see my children [involved], if they want to be. But we're not holding that position open for Lachlan or anyone else." The appointment was likely to be an internal one, he indicated, citing the "great bunch of talented executives right across the company".

He said the decision to spin off the group's newspaper and book publishing assets from its Fox, Sky and Star television and film brands had not been motivated by investigations stemming from a scandal in its U.K. newspaper arm.

The separation would take about 12 months, he said, "and I'd hope we'd be through the vast majority of the costs [of the investigations] by then", he said. "This thing's going to go on a while as people are charged. There will be lawsuits and headlines in certain papers. It's not a costly process but it's an emotional process."

The decision to split the company had been a gradual one, starting three years ago, he said. "I went back and forth on it, and some time ago - I don't know how many weeks or months - I realized this probably was the right thing to do."

In its announcement of what Mr. Murdoch told staff was a plan to "wow the world" as two companies rather than one, News Corp. gave no details of how its cash or debt would be allocated between the two companies, but said the new publishing company would be "one of the best capitalised in the world."

Mr. Murdoch told the FT the allocation of cash and debt had not been decided. Some analysts have speculated that it could spend some of its near-$11bn of cash on a special dividend but he said this had not been discussed.

News Corp would proceed with its previously announced $10bn share buyback plan, he said, "although as we see other uses for our cash it may slow down". He said acquisitions were possible but emphasised that most of News Corp's biggest successes had been with businesses it had built, not bought.

"When we started [the Fox broadcast network], the market said 'Oh, shit', and a few people in the company did too," he said.

Mr. Murdoch said he was not concerned about making News Corp a smaller company in an era when some media companies feel small beside digital groups such as Apple and Google which are playing larger roles in the distribution of their content.

"I think [after the split] they'll both end up very, very big companies" with "no lack of scale", he said. "Frankly, I don't see Apple as a competitor, and you never know with Google." He added that he expected the two sides of the company to continue working together, saying that Wall Street Journal reporters would continue to appear on the Fox Business Network.

News Corp.'s new publishing business will include all of its Australian assets, including its pay-television investments, Mr. Murdoch said. Although publications including The Times in London and the New York Post have often lost money, it would not depend on non-newspaper assets for its profits, he said.

"You're not going to see any print losses tolerated anywhere. We may start something that'll take three years to turn a profit, or we'll have maybe a bad time," he said, but each newspaper would be expected to pay its way over time. 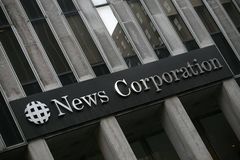