In 2012, when Greece was on the verge of bolting from the euro zone and riots turned the streets of Athens into war zones, little Hellas Trekking, an outdoor holidays company, saw its sales collapse as foreign tourists sought adventures in saner parts of the planet.

"Because of the strikes, the instability and the fear that the drachma was coming back, Americans and Canadians didn't want to come to Greece," said marketing director Loukia Leonidou. "We let go a couple of employees, moved to smaller offices and took half-salaries and didn't spend a thing."

The picture couldn't be more different this year. Hellas Trekking's sales bounced back by 30 per cent last year and should improve by the same amount this year. Two more employees have been hired, taking the total to nine. "We're hiring and we've started to invest. We've changed our computer system and we're going to travel shows," Ms. Leonidou said.

The mood is newly upbeat at Greece's Association of Chief Executive Officers. George Ghonos, a board member on the association who runs McCain Foods' operations in Greece, Cyprus and the Balkans, said employers are on the verge of hiring again. "At our last meeting for the first time, there was no discussion about job reductions," he said. "Gradually our companies will start to recover."

Employers still face horrendous problems, ranging from the largely unreformed public sector to rising taxes. On Wednesday, as if to prove the point that all was not well in Greece, the largest public and private unions launched a 24-hour strike to protest austerity measures. Athens and other cities were once again paralyzed.

Still, there is a sense that Greece is finally on the mend after the deepest and longest economic downturn since the Second World War. The Greek government apparently feels the same. On Thursday, it plans to sell long-term bonds for the first time since 2010, when soaring bond yields pushed it out of the debt markets and into a sovereign bailout sponsored by the European Union and the International Monetary Fund.

The €2-billion ($3-billion) of five-year bonds will probably be sold with yields of about 5 per cent. While that's still high by euro zone standards – the debt costs in Portugal, another bailed out euro zone member, are less than 4 per cent – the level is a remarkable turnaround from the height of the crisis. In 2012, yields on 10-year Greek bonds were 30 per cent or more.

The five-year debt sale, if it succeeds, will be a huge vote of confidence in both Greece's revival and the revival of the euro zone's other economic weaklings, including Ireland, Spain, Italy and Portugal. But some economists and strategists think investors have become overly bullish.

"The Greek bond sale would mark the official end of the euro zone crisis," said Nicholas Spiro, managing director of Spiro Sovereign Strategy, a London debt investment firm. "Greece has been the most conspicuous example of improvement in the euro zone periphery. Still, a cursory glance of the underlying fundamentals suggests there is a big disconnect between the bond markets and the economic and political reality."

There is little doubt that the worst is over for Greece. While the country's gross domestic product shrank 3.9 per cent in 2013, marking the sixth year of recession, the pace of contraction slowed in each quarter. The Greek government forecasts 0.6 per cent growth this year. That's hardly enough to make a dent in the record 27.5 per cent jobless rate but in Greece, any good news is welcome after an era best described as an economic depression.

There's more. Greece posted a small current account surplus in 2013, its first since 1948, and should produce a primary surplus – the budget surplus before debt payments – of 1.6 per cent of GDP this year. Tourism has come roaring back and manufacturing is no longer in free-fall.

The bad news, however, is ample. The economy is deflating and the debt load is rising. Public debt is now equal to 175 per cent of GDP, by far the highest in the euro zone. Unless growth comes roaring back and deflation is replaced by inflation, Greece may require another bailout or a second debt restructuring. Economic reforms have hardly been sweeping. "The public sector is still huge and we have to pay those people who are doing nothing," Ms. Leonidou said.

Greece's political situation is also shaky. The ruling coalition, led by the New Democracy Party, has a bare majority in parliament and the junior partner, Pasok, is losing ground. The coalition could easily lose its majority before the scheduled 2015 election. If so, the anti-austerity radical left party, Syriza, which is rising in popularity, could force a snap election. Syriza's near victory in the June, 2012 election sent international investors fleeing and triggered a bank run that almost wrecked the banking system.

Greece, in other words, remains a huge potential risk for investors even as the economy stumbles out of recession. "We've gone from paranoia to complacency in a worryingly short period of time," said Mr. Spiro. 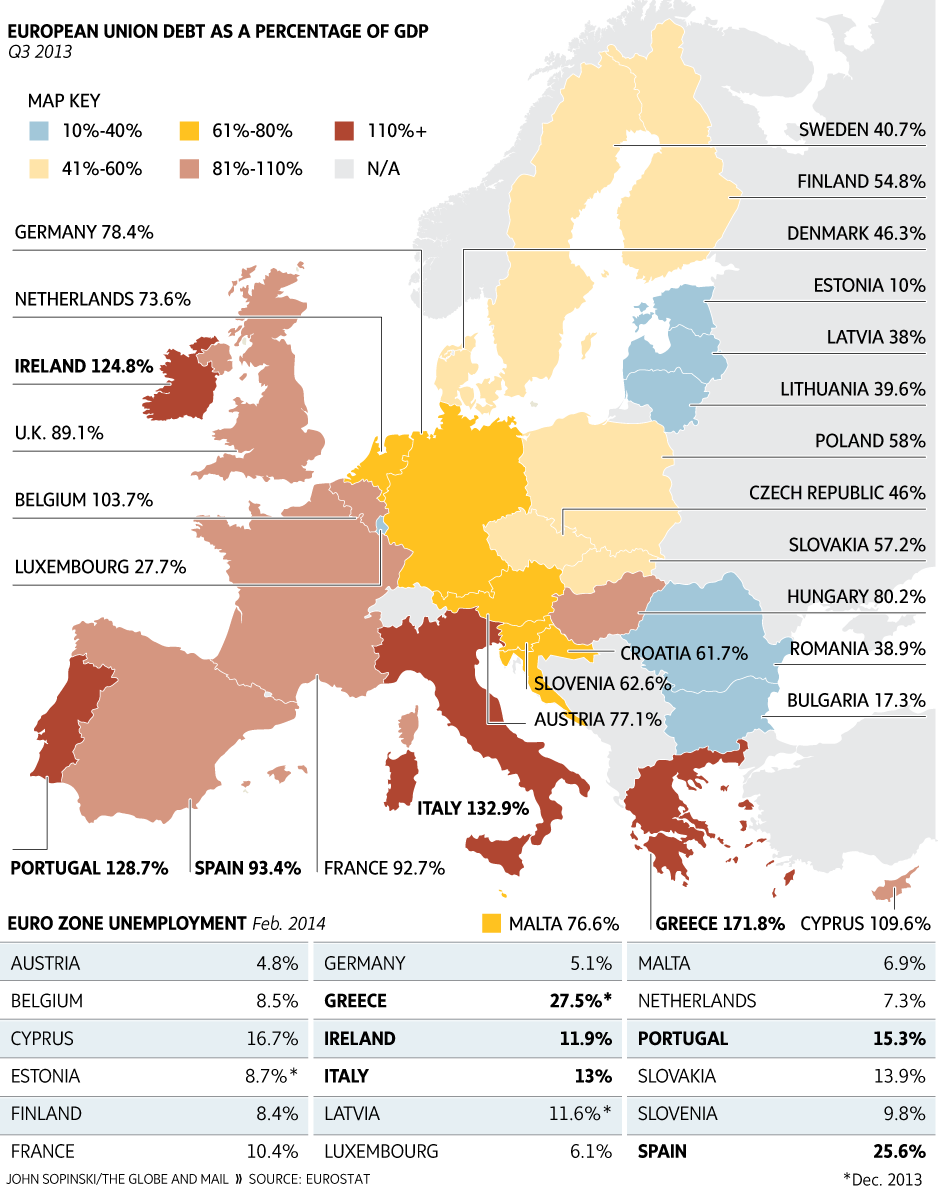 NOTE RE THIS CODE: change width to 300 for mobile

View more suggestions in Following Read more about following topics and authors
Follow Eric Reguly on Twitter @ereguly
Report an error Editorial code of conduct
Due to technical reasons, we have temporarily removed commenting from our articles. We hope to have this fixed soon. Thank you for your patience. If you are looking to give feedback on our new site, please send it along to feedback@globeandmail.com. If you want to write a letter to the editor, please forward to letters@globeandmail.com.
Comments