The Scottish pro-independence movement is gaining so much momentum that the break-up of the United Kingdom is rapidly shifting from the inconceivable to the possible, underscoring the huge economic and business issues at play.

A YouGov poll conducted for The Sun and The Times found that support for Scottish independence had climbed by eight percentage points since mid-August, excluding undecided voters, and a compelling 22 points over a month.

The "No" camp is now squeaking by with a six-point lead, with 53 per cent compared to 47 per cent for the "Yes" side. The polls mean that a swing of only three points could launch Scotland towards independence in the Sept. 18 referendum.

Writing in the Sun, YouGov president Peter Kellner said the independence campaign is "in touching distance of victory."

The surge for the "Yes" camp, which came after a TV debate whose victor was widely judged to be Scottish National Party leader Alex Salmond, came even though Scottish voters know no more about their economic future now than they did earlier in the summer.

Fundamental questions about the cost of Scotland going it alone remain unanswered. They include what currency an independent Scotland would use (the British government has said repeatedly that a currency union is off the table); the enduring health, or lack thereof, of North Sea oil and gas reserves; an independent country's tax regime and whether big Scottish employers, such as the banks and fund mangers that turned Glasgow and Edinburgh into international financial centres, would consider Scottish independence overly risky and flee to England.

The YouGov poll spooked the British markets. The pound fell against the dollar and the euro and British 10-year sovereign bonds climb 5 basis points (100 basis points equals 1 percentage point), taking the yield to 2.43 per cent, virtually identical to Italy's. The FTSE-100 index fell marginally. A Société Générale analyst said a "Yes" vote would knock as much as 5 per cent off the value of the pound.

With a little more than two weeks remaining before the vote, the Better Together campaign will have to redouble its efforts to convince the Scottish that they would imperil their prosperity if they vote to end their 307-year union with England. So far, the "No" side has relied on the fear factor, insisting that a currency union would not be allowed and challenging the SNP's assertion that Scotland would enjoy robust petroleum revenues for many years.

The threats do not appear to be working. Home secretary Teresa May said that border controls could be erected between an independent Scotland and the rest of the U.K., jeopardizing trade, but law and trade experts think such controls would be unlikely. Quoted in Tuesday's Guardian, Stephen Tierney of Edinburgh University's Centre for Constitutional Law said the U.K. would ask "do we really want the cost of setting up those controls when there is so much convenience, when there is so much in Scottish-English traffic?"

The far bigger issues are the North Sea and the possible exodus of employers.

The North Sea is in decline. Between 1999 and 2010, production on the U.K. side fell on average 6 per cent a year. Since 2010 alone, production is down 40 per cent and is now running about 1.4-million barrels a day. The SNP expects the North Sea to produce at least £35-billion in oil tax revenue between now and the 2017-18 fiscal year, but Britain's independent Office of Budget Responsibility puts the figure at only £18.8-billion.

The chief executive officer of a North Sea oil producer, who did not want to be identified, said the entire industry fears that an independent Scotland would be tempted to treat the North Sea as a cash cow to fund the early years of independence and impose new taxes on producers. If that were to happen, he said, the investment required to keep production from plummeting might go missing. The British government was well aware that the North Sea needed investment but still hiked taxes in 2011, boosting the "supplementary charge" on production to 32 per cent from 20 per cent.

While it is no secret that the North Sea is in irreversible decline, the SNP has not said what industry might replace it once the reserves are tapped out. Scotland's other big industry, financial services, also faces a dubious future. While hundreds of businesses in Scotland have vowed to stay put if Scotland achieves independence, some of the biggest employers are warning that an independent Scotland would pose potentially damaging risks, ranging from ongoing membership in the Euopean Union to the identity of its currency. While Mr. Salmond wants to keep the pound, an independent Scotland may be forced to adopt its own currency or the euro.

A recent letter signed by 130 business leaders, including Douglas Flint, chairman of HSBC, one of the world's biggest banks, said that all these uncertainties would be "bad for business."

The SNP and its supporters have not been swayed by what they see as fear-mongering. They believe that Scotland's ample natural and human resources would keep its living standards intact, or improve them. "We know Scotland can survive as an independent country, because key economic decisions will be made by those who truly understand and care most about our Scotland's distinctive economic needs," Tony Banks, chairman of the pro-independence Business for Scotland, said last week in the Herald of Scotland.

Scottish Canadians: How would you vote in the referendum?
September 2, 2014
Scottish independence campaign leader falters in TV debate
August 5, 2014 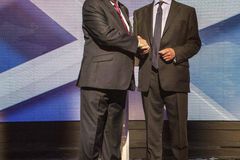 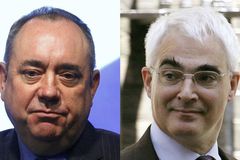