Russia's status as one of the emerging markets' economic stars is over.

Falling prices for oil, the lifeblood of the Russian economy, and economic sanctions have pushed it to the verge of recession and a return to growth is not expected until 2017.

Russia's central bank on Monday revealed that its base scenario calls for zero growth in 2015 and only 0.1 per cent growth in 2016. Growth of 1.6 per cent is expected in 2017, but that's well short of the 3.5-4.5 per cent seen between 2010 and 2013, when the postcrisis rebound in oil prices turned the country into an investment magnet and saved its oligarchs from ruin.

The forecast assumes the sanctions remain in place until 2017 and an average oil price of $95 (U.S.) a barrel next year, followed by a decline.

While it's probable that the sanctions will not disappear any time soon, the oil assumption seems brave. Brent crude, the effective global benchmark, has fallen about 25 per cent since June and traded Monday at just less than $83. If OPEC fails to tighten output at its Vienna meeting at the end of this month, another steep fall cannot be ruled out.

"Oil at 95 [dollars] may be optimistic, but the assumption of sanctions staying until 2017 seems very realistic and suggests Russia is planning for the long haul," Standard Bank analyst Tim Ash said in a note.

At the same time, the central bank pushed out its medium-term inflation target of 4 per cent to 2017 from 2016. Russian inflation is 8 per cent or higher and that puts Russian President Vladimir Putin in a tight spot. If inflation remains high, he risks a consumer backlash as buying power drains away. But trying to tame inflation through higher interest rates – they have already been hiked by 1.5 percentage points this year – would be deeply unpopular for consumers and businesses.

The ruble actually climbed by more than 2 per cent Monday morning, after the central bank published its new forecast. The rise was probably triggered by the central bank's decision to abandon a trading band for the ruble, allowing the currency to float freely. The free float would see the bank end its predictable daily currency interventions. But in an apparent effort to deter short sellers, the bank said it would intervene to support the ruble if it sees a threat to financial stability.

Russia's new natural-gas export deal with China, signed by Mr. Putin and Chinese President Xi Jinping Sunday in Beijing, may have contributed to the ruble's rise on Monday. The deal, the second announced by the two countries this year, is worth hundreds of billions of dollars and shows that Russia can find new outlets for its energy even as Europe attempts to reduce its heavy reliance on Russian gas. A Nomura report said that the two deals signed this year could allow Russia to supply almost 17 per cent of China's gas by 2020.

But Russia's currency slump may be far from over. The ruble has fallen by almost 30 per cent against the dollar this year, with all of the fall coming since June, when oil prices began to slide and geopolitical tensions increased. In July, the ruble was dealt another blow when the European Union and the United States imposed a second round of sanctions on Russia. Since September, the currency has been in step decline and highly volatile, with wild swings on any given trading day.

Measured against the dollar, the ruble has now fallen by half since mid-2008.

The question is whether the currency rout will get worse, and it could if investors lose confidence in the currency. The trigger could come from another big fall in oil prices or an escalation in the conflict in Ukraine, which seems well under way this week. "What started as a slow-burn currency crisis now threatens to become a full-blown financial one, with the risk of a run on ruble-denominated deposits increasing with each passing day," Nicholas Spiro, of London's Spiro Sovereign Strategy consultancy, said in a Monday note.

While the devalued ruble has been good news for Russian exporters and has yet to inflict serious damage on Russian oil companies (since most of their costs are in rubles while they sell in dollars), Russia's banks face big risks. As the currency falls, and as the sanctions prevent some of them from raising capital in Western markets, their ability to refinance their foreign currency-denominated debt will suffer. Banks and corporate borrows have about $40-billion in foreign debt coming due by the end of the year and a larger amount last year.

On Monday at the Asia Pacific Economic Co-operation summit in Beijing, Mr. Putin did his best to calm the currency markets. "We are currently seeing speculative jumps in the exchange rate, but I think that this should stop soon," he said, insisting that the ruble's steep fall is "absolutely not related to fundamental economic reasons." 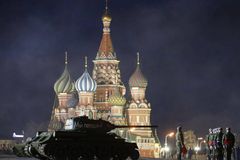 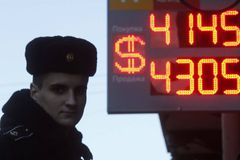 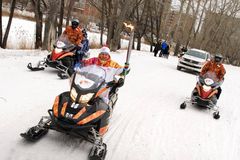 Despite plunging ruble, sputtering economy, Russians still back Putin
May 12, 2018 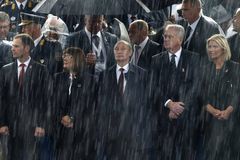