A wintry burst of weather hit businesses and travellers across Britain for a fourth day on Monday, threatening an unprecedented "triple-dip" recession that could knock the government's economic plans further off track.

Commuters fought to get to work as airlines and train operators struggled to deal with a blanket of snow and ice, while some 3,000 schools were closed, forcing parents to stay at home to look after children.

Figures this week look set to show the economy shrank again in the fourth quarter of 2012. The snow-induced loss of working days for manufacturers and builders, allied to falls in business for shops, pubs and restaurants, could now push the first quarter of 2013 into the red also.

Even if the economy does turn around later, it would leave the government seeking to dispel fears of slow growth well into next year – with an election due the year after.

"At a time when retailers are already under pressure, bad weather which keeps people from going shopping is very bad news," said Richard Dodd from the British Retail Consortium body representing the country's major chains.

"That said, it would have been much worse had it happened over Christmas."

Economists said that while retailers may be able to make up the lost sales as customers come back to buy later what they would have bought anyway, the impact on construction and manufacturing is harder to smooth over quickly.

"Assuming the fourth quarter is as substantially negative as we now fear, we will almost certainly be heading back into recession," Peter Spencer, chief economic adviser to business think tank the Ernst and Young Item Club, told Reuters.

"When the economy is bouncing along the bottom anyway, a bout of bad weather can easily tip it into negative territory."

There was a familiar hum of national outrage at train stations and airports about the struggle to run normal services more than 12 hours after the last snowfall in many areas on Sunday evening.

Commuter operators across southern England were operating reduced services and only six of every 10 of those were running on time. British Airways had cancelled 350 flights since Friday, largely at the request of London's Heathrow airport, which has little room to reschedule delayed flights.

That reflects a shortfall in infrastructure investment over past years which has fallen behind euro zone neighbours. Operators note, however, the U.K. has less snow than much of the rest of Europe and less on average now than it did 20 years ago.

That was no consolation for 24-year-old Georgina Kourousiakli and Fay Sakellariou from Athens, who missed their flight home by minutes due to train delays on Monday morning.

"They don't care about us, we told them we need somewhere to live until tomorrow and they just looked at us and said 'oh'," Georgina said. "We don't have any money to eat … we can't call home and the Internet is 10 pence per minute."

Heathrow has come under heavy criticism before for not handling inclement weather well.

The Conservative-led coalition government had lauded numbers for the third quarter of last year which saw Britain emerging from its second recession since the 2008 financial crisis.

But that always looked at risk from the gloom amongst consumers who account for two-thirds of the economy. They have seen wages fall consistently compared with inflation while also struggling to reduce debts built up in a decade of booming credit growth.

A survey on Monday showed the state of most households' finances continued to worsen in January, even if the rate of decline was slightly less pronounced than a month earlier.

"Concern remains that consumers will be restrained in their spending over the coming months which will limit growth," said IHS Global Insight economist Howard Archer.

He noted that snow had helped spur contractions in the first quarter of last year and fourth quarters of 2010 and 2011.

"With the bad weather looking set to continue well into this week and possibly beyond, the risk of a triple dip recession is growing by the day," he said.

The Conservative-Liberal Democrat coalition's central promise after gaining power in 2010 was to eliminate Britain's underlying budget deficit by the end of a five-year term.

But that target was reliant on the private sector taking up the slack for some of the harshest cuts in public sector spending since the Second World War. So far this year, government borrowing is up 10 per cent due to falling revenues. 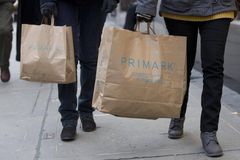 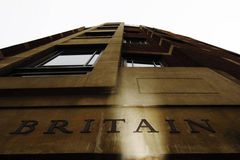 Music ends for HMV as U.K. retailer calls in administrators
May 11, 2018 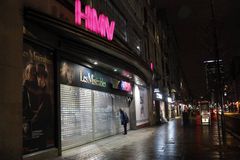 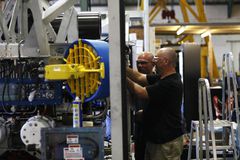 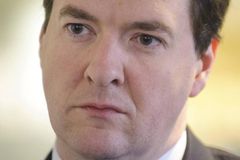