The high-stakes showdown to keep Greece inside the euro zone reached a crisis point on Monday, when a second attempt to negotiate a new rescue program for the country broke down less than two weeks before the existing bailout expires.

Unless the impasse is overcome by Friday, the last day Greece can ask for an extension of its €175-billion ($247-billion) bailout, Athens would risk a financial meltdown over the next few months that might see it default on its debts and be forced to reprint the drachma or issue IOUs to try to keep the government and its banks afloat.

But Greek Finance Minister Yanis Varoufakis insisted late on Monday that Greece had every intention of remaining in the euro zone and there was still room for a breakthrough. "I have no doubt that, within the next 48 hours, Europe will come together and find the phrasing so we can move on to do the real work to find common ground," he said in a press conference after the end of the euro-zone finance ministers meeting in Brussels.

Monday's talks had been billed as a make-or-break session on Greece's future after a finance ministers' meeting five days ago ended in failure.

Some analysts and economists were not persuaded that anything beyond a financial "fudge" could be agreed to this week, one that would release some funds to Greece while negotiations continue.

"These two sides are at daggers drawn because there is no trust between them," Nicholas Spiro, managing director of Spiro Sovereign Strategy, a London debt consultancy, said in an interview. "I think we're looking at weeks, maybe months of intense talks. The new Greek government needs to establish its anti-austerity credentials and now is simply too early to do that."

Mr. Varoufakis said he was willing to sign an early version of a draft agreement pulled together by the finance ministers. But that draft was withdrawn and replaced by another that offered "nebulous words." He did not go into details, but hinted that the EU still doesn't fully understand that harsh austerity is ruining the Greek economy, not helping it.

"Europe is going through the difficult process of understanding that Greece has a new government committed to changing a program that has clearly failed in the eyes of everyone who doesn't have a vested interest," he told the media.

If the bailout program outright collapses, Greece's access to the financial backstop from the European Union, the main sponsor of the bailout, could trigger a liquidity and funding shortfall in Greece in a hurry. Various funds, including €10.9-billion in stability funding for Greek banks, would go out the door.

Greek banks are thought to be losing about €2-billion in deposits a week, as customers withdraw their savings for fear of a bank collapse. In Athens trading on Monday, Greek bank shares fell by more than 10 per cent. Eurobank, which is partly owned by Prem Watsa's Fairfax Financial Holdings of Toronto, was down 12 per cent.

In an e-mailed statement shortly after the euro-zone ministers packed it in, the Greek government called the demands from the Eurogroup "absurd" and "unacceptable." Greece's new anti-austerity government, led by prime minister Alexis Tsipras of the radical left Syriza party, has repeatedly said it would not accept an extension of the bailout program and the strict austerity conditions that go with it. Mr.Varoufakis had said that there was no sense flooding Greece with new loans that the country is incapable of repaying.

Instead, Greece had asked for a "bridging" program to buy it some time.

Eurogroup chairman Jeroen Dijsselblom effectively issued Greece an ultimatum. "We can use this week, but that's about it," he told the media after the meeting ended. "There was a very strong opinion across the Eurogroup that the next step has to come from the Greek authorities."

He added that "We think that the best way forward is to get an extension of the current program. Once we had that, which would require of course commitments also from the Greeks that they are serious about this … we can then talk, they can talk with the institutions on the flexibility, how to make changes within the program."

Mr. Dijsselblom suggested that the "bridging" scenario proposed by the Greek government and an extension of the existing bailout program were more or less the same. "When I listen to my Greek colleagues talk about a bridge arrangement, creating time, et cetera, that's a different word in my mind for an extension."

The new Greek government has argued that its strong victory in the Jan. 25 election gave it a democratic mandate to end the hated bailout program and the harsh austerity measures that go with it, such as the requirement that it run a primary budget surplus – the surplus after debt payments are stripped out – of 4.5 per cent of gross domestic product. It wants to run a far smaller surplus so it can devote more funds to social spending in a country rife with poverty after five years of deep recession. 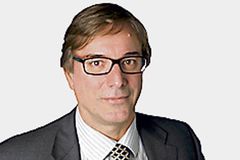 Opinion
It is time for compromise for both Greece and its lenders
February 12, 2015 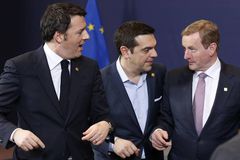