On March 20, the U.S. authorized sanctions against billionaire Gennady Timchenko amid the escalating crisis between Russia and Ukraine. Three weeks later, the Russian tycoon, who amassed a fortune trading oil and selling natural gas, appeared on Russian television. He was not in Russia at the time. He was in China. The West, he said, was "pushing us away." China was not. In fact, Chinese companies were talking with Mr. Timchenko about buying more of Russia's abundant energy.

"There is a market with a lot of potential developing in the Asia-Pacific region," said the billionaire, who boasts close ties to Vladimir Putin and has been called one of Russia's most powerful men.

This week, the country's Prime Minister was even more explicit: "We are interested in diversifying today more so than ever before. Therefore we are implementing solutions for the export of gas and oil to Asian and Pacific countries, first and foremost China," Dmitry Medvedev said on Russian television.

As the global fissures radiating from Russia's moves against Ukraine call into question the future of its ties with Western powers, Russia is increasingly casting its gaze east, to a distant border long neglected. In May, Mr. Putin is expected to come to Beijing to sign a major contract that will see Russia pipe vast quantities of natural gas to China. It will mark the sixth meeting between Mr. Putin and Chinese President Xi Jinping since the beginning of 2013, as Russia pushes for a "pivot east" that has taken on sudden new urgency in the wake of the country's moves in Ukraine, which have earned it global criticism, and an increasing likelihood of punitive sanctions.

The change stands to have wide-reaching ramifications, redrawing geopolitical alignments and altering global energy flows, a matter of concern to Canada, among others.

For Russia's economy, Ukraine stands to create "a major crisis," said Vassily Kasin, a China expert with the Centre for Analysis of Strategies and Technologies, a Moscow-based defence studies organization. "And China will become the major economic partner." The two countries "will in fact move very close to an alliance, I think," he said. "This is a major change."

In recent weeks, Russian banking leaders have publicly discussed the possibility of joining with China's UnionPay credit card system – the world's third most popular – as an alternative to Visa and MasterCard, amid worries they will be shut out of Western payment systems. Russian companies are exploring ways to use Chinese public markets over Western alternatives. Russia's defence community believes sales of highly sophisticated fighter jets and submarines to China are increasingly likely.

Driving the new urgency is a realization that, though sanctions are limited for now, there is a risk the international community will impose a more severe chokehold on Russia. "The chances of isolation from the West are a real risk that Russia has to take into account," said Ildar Davletshin, a Moscow-based oil and gas analyst with Renaissance Capital.

Ties between the two countries have steadily strengthened in recent years. China now forms roughly 10 per cent of Russia's trade, higher than any other individual nation (although EU zone countries are, together, roughly four times higher). In the past 12 months, Russia has signalled a willingness to move further, as the country opens some of its crown jewels to Chinese ownership. In October, oil and gas company Rosneft signed a 51-49 joint venture with China National Petroleum Corporation to explore for oil in Eastern Siberia, whose reserves could be used to fuel Chinese cars. Last June, CNPC also took a 20 per cent stake in Yamal LNG, a giant Arctic natural gas development being pursued by NOVATEK, another large Russian energy company.

Other indications suggest a broad ascent in business between the two countries. Direct trade between the ruble and China's yuan began in late 2010. At that time, Russia's Micex exchange said it expected three-million yuan to change hands daily. By last June, it had risen to 34-million a day, with a single-day peak in July, 2013, of 55-million (about $9.4-million at the time).

It is a major shift for Russia, which has long treated China with suspicion, out of fear that too closely aligning with China could effectively make Moscow an effective "junior partner" of Beijing, said Bobo Lo, a British academic who has spent decades studying Russia's foreign policies and geopolitics. Though three-quarters of its land is geographically Asian, Russia has traditionally seen itself as a largely European power, with a historically dim view on its eastern holdings. Czar Alexander II sold Alaska in 1867, and Joseph Stalin saw in Siberia a land suitable for labour camps and little else.

Russia's relationship with China, too, has been often uncomfortable. Russia sends timber, metals and other commodities to China in exchange for manufactured goods. It is, for China, a relationship much "like they have with developing countries in Africa and Latin America," Mr. Lo said. For Russia, that is "psychologically a bit humiliating. It's quite hard being a raw materials appendage to a country you felt superior to for the better part of the past 300 years," he said.

Russia must also overcome efforts by the U.S. to limit the expansion of its reach in Asia. In echoes of a new Cold War, U.S. diplomats are actively working to isolate Russia, an effort that will involve seeking to have China, too, push back the Kremlin. This week Washington and Tokyo issued a joint communiqué saying they "are consulting closely on further measures against Russia over its deplorable conduct" in Ukraine – a sign that Mr. Putin's lobbying of Japan, to whom Russia also wants to sell more gas, may have difficulty succeeding.

China, meanwhile, has shown its own willingness to keep Russia at some distance. Last fall, Mr. Xi travelled to Turkmenistan, Kazakhstan, Uzbekistan and Kyrgyzstan. He signed a flurry of deals that will see more Central Asian energy flow to China. The trip also saw agreements on cultural and political exchanges that suggest a deepening relationship with the region. China routinely speaks about bringing back to life a Central Asia "Silk Road" trade corridor that is a geographical broadside to Russia, with its own ambitions to act as a bridge between Asia and Europe. As Russia turns to China, China itself is quietly moving to displace Russia in parts of its traditional territory. The Warsaw-based Centre for Eastern Studies observed that "China has replaced Russia as Turkmenistan's patron and main sponsor."

Culturally, too, there is dissonance between the Russia and China: Lawyers say deals between the two tend to be negotiated in English and consummated in U.S. dollars.

The deal's conclusion would serve as an unmistakable sign of a changing relationship. Over the past decade, China and Russia have agreed seven times to the basic outlines of an agreement. Each has failed, amid disputes over price and the role Chinese companies might take in building the pipe and extracting the gas it will carry.

At stake, if those issues are near resolution, is a disruptive project with a massive pricetag. If China is prepared to buy the gas, Gazprom has outlined a near-$40-billion (U.S.) plan to develop gas fields in Eastern Siberia and lay the 4,000-kilometre Power of Siberia pipeline, capable of carrying 61-billion cubic metres per year of gas.

"At the moment, the bulk of revenue for Gazprom's gas sales is in Europe – some 55 per cent comes from Europe, while Asia represented only 6 per cent in 2013," said Geoffroy Hureau, secretary-general of Cedigaz, a Paris-based association that gathers global natural gas statistics.

"But there is a strong political will from the Kremlin to boost gas sales to Asia from 6 per cent to more than 30 per cent by 2035."

Implicit in these plans are a challenge to the rest of the world, not least Canada: If Russia succeeds, it will displace gas supplies from other countries eager to sell to China. Academics and financial analysts say it stands to cut prices in the daily liquefied natural gas trade by $2 per million BTUs, a direct challenge to the profitability of potential export projects in Canada.

What the deal won't necessarily mean is starving Europe of gas. The Eastern Siberia fields are major discoveries, but disconnected from those farther east that supply Western consumers. Gazprom has, in fact, also laid plans to boost its European market share by some 25 per cent over the next 15 years, although those prospects have grown decidedly hazy as EU leaders seek to wean themselves from Russian gas.

The vast untrammelled stretches of Eastern Siberia nonetheless offer all manner of opportunity for profit between Russia and China. Flowing atop underground reserves of oil, gas and minerals are untamed rivers that could pump large volumes of hydroelectricity to China. It's a matter of no small interest for Beijing as it seeks smog-free ways to power its cities – an argument that also favours a Sino-Russian gas trade.

"In many ways, Russia to China looks similar to Canada to the United States," said Peter Hartley, an economics professor at the University of Western Australia who has written extensively about energy economics and has helped develop a global model of natural gas flows and economics. "There's great potential."

But, he said, the issues of trust that have historically separated Russia and China – the two sides exchanged fire as recently as the 1960s – remain real. Watching Mr. Putin's tactics in Ukraine, where he has shown an eagerness to use Russian energy to serve its political interests, is unlikely to bring China much comfort.

There is, then, a certain irony to Russia's moves in Ukraine: Even as it drives the Kremlin east, it may also make it more difficult to do so.

Does Beijing really want it energy beholden to "a guy like Putin being being able to turn it off at a moment's notice?" Mr. Hartley asked. "I don't think so."

Why China has turned its back on Russia Subscriber content
May 12, 2018 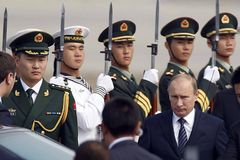 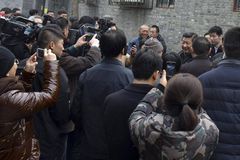