The emphatic No by Greek voters in a weekend referendum amounts to a plea that the rest of Europe recognize their pain.

Polls consistently show that most Greeks still want to be part of the euro zone. Their goal is a new deal that will allow the debt-plagued country to resume growth within the currency bloc.

However, euro-zone governments appear to have run out of patience with the country’s faltering efforts at economic reform. Hopes for an amicable resolution could fall apart over the next few days. Here are three alternative scenarios. 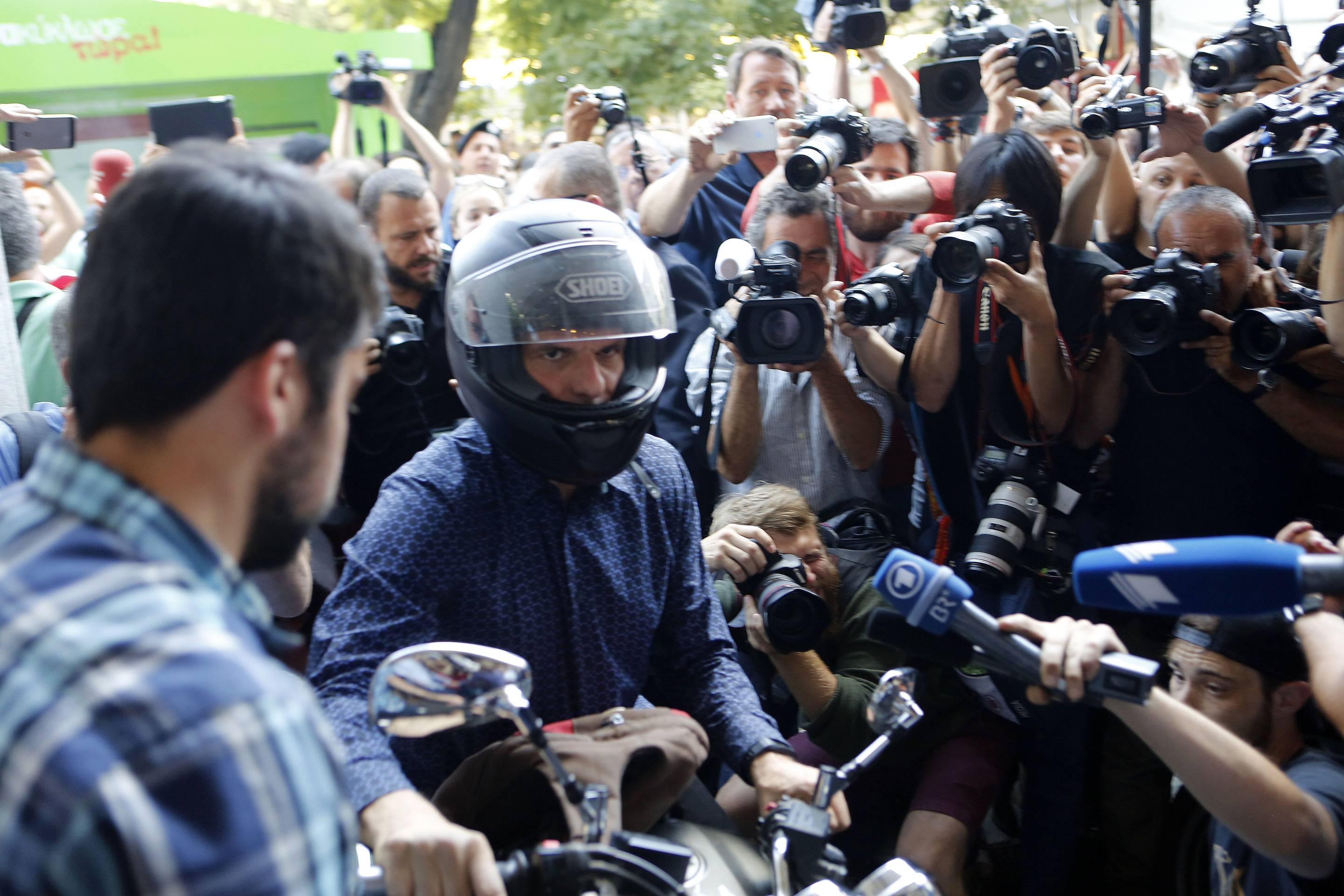 Stay in the euro

There is still a distinct possibility that Greece will remain in the euro zone for the simple reason that no one clearly wins from watching it walk out the door.

A Greek exit would encourage fears that other countries might also defect from the currency bloc. An especially nasty or messy “Grexit” could infect financial markets across Europe with panic (although most stocks and bonds greeted the referendum results on Monday with a yawn). For Greece itself, there would nearly certainly be a lurch into even deeper recession as businesses and consumers struggled to adapt to a new currency.

Avoiding Grexit, however, requires Greece and its creditors to reach agreement on a new bailout to replace the €245-billion deal that has expired. Before the referendum, Greek Prime Minister Alexis Tsipras had vowed that a No vote would strengthen his negotiating position and result in a better deal within 48 hours. That was fantasy.

Euro-zone leaders will meet Tuesday evening in Brussels to mull their response to the referendum result. Greece wants – and by most estimates, needs – a major writedown of its debt to restore its economy to growth. But its creditors fear that cutting Athens some slack would encourage demands for similar generosity from opposition parties in countries such as Spain.


One hopeful sign for further talks was the resignation on Monday of the outspoken Greek Finance Minister Yanis Varoufakis. The motorcycle-riding, T-shirt-wearing professor of game theory had angered his negotiating partners with lectures on the defects of the euro zone in general as well as musings on their particular short-comings. His departure may ease future negotiations.

The European Central Bank said Monday it would continue to provide a lifeline to Greek banks, which have seen much of their capital flee to safer locales. However, it is requiring the banks to put up more assets in exchange for emergency loans and is maintaining a cap on the total amount of the borrowing. The banks, which were closed more than a week ago, will remain shut until at least Thursday. 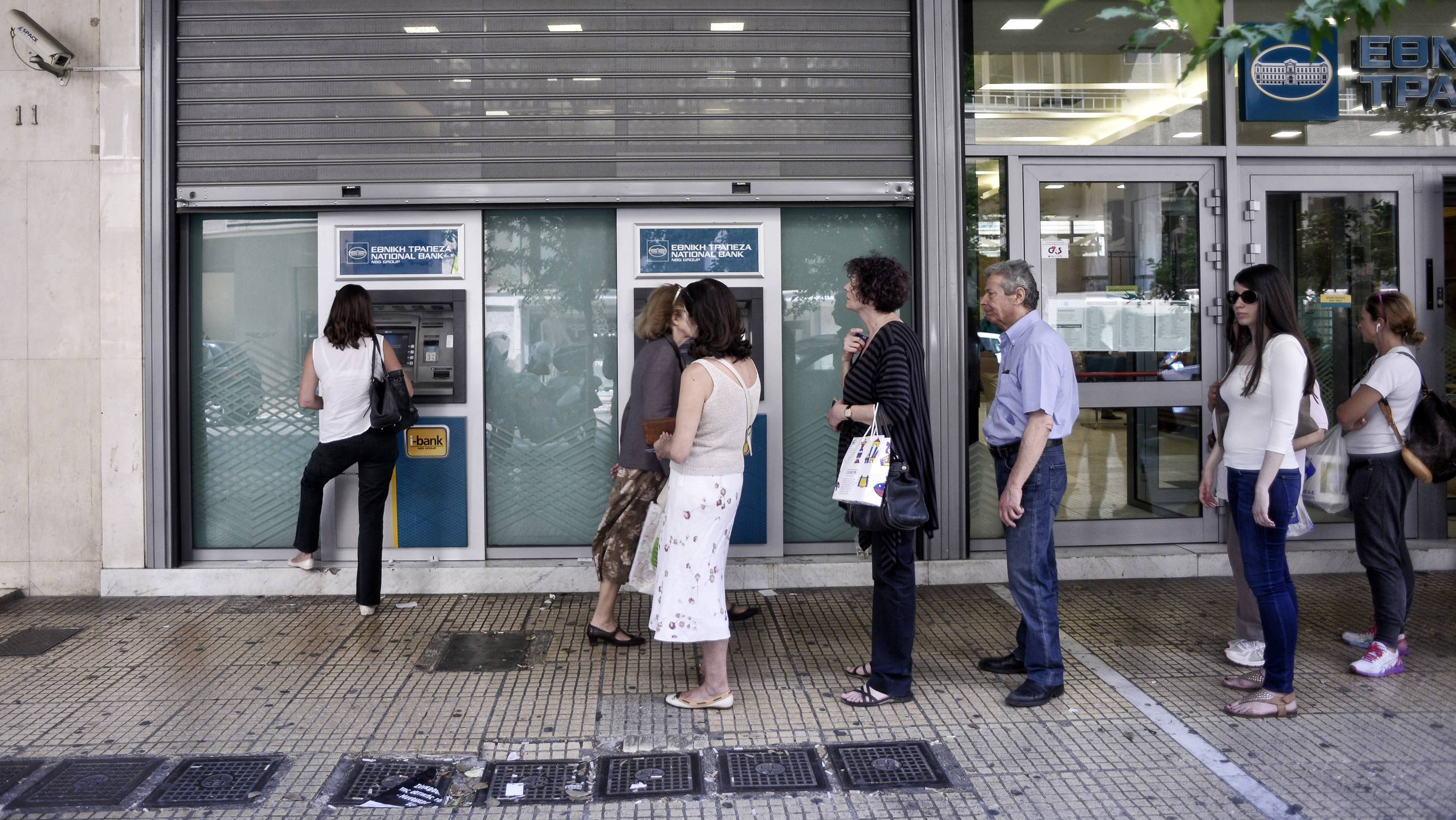 People line up at an ATM machine outside a bank in Athens on Monday. (Milos Bicanski/Getty)

While all parties are playing nice for the moment, the politeness may not last for long. Athens will be given a chance on Tuesday night to present a new reform plan to euro-zone leaders. If it fails to impress, and Greece misses a €3.5-billion bond payment to the European Central Bank on July 20, all bets are off.

The ECB might then decide to cut off its remaining assistance to Greece’s financial system. At that point, Greek banks could no longer function in euros, even to the limited extent they are now, following the imposition of capital controls more than a week ago.

Credit cards would stop working, cash withdrawals from ATMs would cease. Greece would have little choice but to consider more drastic action to pay for necessities from food to medicine.

A Greek government without euros could decide to stop short of reintroducing the drachma. It might instead issue IOUs, denominated in euros but backed only by Athens’ promise to pay at a future date, to keep Greece technically in the euro zone while continuing negotiations.

“Reintroducing the drachma would be totally illegal under European law and form the basis for a law suit to force Greece out of the European Union,” writes Anil Kashyap, a professor of economics and finance at the University of Chicago. “Expulsion from the EU would be devastating. Issuing IOUs, which are not officially touted as a currency, is a better option for Greece right now.”

Of course, “better” is a relative term. The IOUs would circulate alongside euros. Most sensible people would strongly prefer euros, so the IOUs would quickly fall in value and trade at a discount, Prof. Kashyap says.

Most estimates say the discount would chop at least 30 per cent from Greeks’ ability to purchase imported goods, dragging the country even further into the economic abyss.

Euro coins are seen in front of an old Drachma banknote in this photo illustration. (Dado Ruvic/Reuters)

In many eyes, the most likely outcome of Sunday’s referendum is Grexit. While the vote “does not guarantee a Greek exit from the euro zone, it has surely raised the probability of such an event further above 50 per cent,” says Jonathan Loynes of Capital Economics.

Grexit would actually be a good thing in the long run, many economists say. They believe reintroduction of the drachma is the only practical way for Greece to restore vigour to its economy, despite the short-term pain involved.

The new currency would plunge in value against the euro, making Greek exports and Greek vacations far more competitive on world markets. It would also render imports more expensive, providing an incentive for Greek producers to replace pricey foreign goods with cheaper domestic ones.


While IOUs might help sustain the country in the short run, “Greece still needs a more competitive currency to return to the strong and sustained economic growth needed to repair its public finances over the longer term,” Mr. Loynes writes. “Against this background, we maintain our view that Greece will leave the euro zone. It is just a matter of exactly when and how.”

A nice Grexit might see the euro zone allow Greece to walk away from some of its debts and reintroduce the drachma but with the goal of eventually returning to the euro zone when it has restored its economy to health.

“A temporary leave of absence from the euro zone would allow Greece to achieve a price-level decline relative to other euro-zone countries,” writes Martin Feldstein, a professor of economics at Harvard University. “The Maastricht Treaty explicitly prohibits a euro-zone country from leaving the euro, but says nothing about a temporary leave of absence (and therefore doesn’t prohibit one).”

A nasty Grexit would be much worse, of course. The euro zone could erect trade barriers to Greek products and impose other sanctions.

At the very least, a breakup would involve endless recriminations. The strongest ally the current arrangement may have at the moment is the reluctance of either side to be blamed for its demise.