Russia's apparent willingness to use energy as a political weapon is a wake-up call to the Group of Seven countries on the need to diversify supplies, including the development of Canadian and American liquefied natural gas, G7 energy ministers say.

A joint statement released after the ministers' two-day conference in Rome said: "We are extremely concerned by the energy security implications of developments in Ukraine, as a consequence of Russia's violation of Ukraine's sovereignty and territorial security."

In an apparent reference to Gazprom, the state-controlled Russian energy giant that supplies a third of the gas consumed in the European Union and virtually all of the gas in much of Eastern Europe, the ministers said. "No country should depend totally on one supplier. We intend to promote a more integrated LNG market."

Gazprom has cut supplies of gas to Ukraine at least twice in recent years. Last month, it announced it would end Ukraine's gas discounts and demanded more than $2-billion (U.S.) in arrears payments.

The statement comes as good news for the United States and Canada, which are sitting on a glut of gas, thanks to extensive shale gas production, and hope to export it in the form of LNG to European and other international markets. Speaking on the sidelines of the conference, Greg Rickford, Canada's natural resources minister, said: "Liquefied natural gas as [a form of ] diversity of supply is great for Canada. We believe that 2020 is a reasonable timeline to live up to our potential of exporting LNG."

Canada is already gearing up for LNG exports. The German utility E.ON recently signed a deal with Halifax-based Pieridae Energy to import LNG from a terminal that is to be built in Nova Scotia.

A few LNG terminals are being built in Western Europe. Italy has three regasification plants – the terminals that convert the ship-laden LNG into gaseous form and pump it into pipelines – and has approvals to build three more. Italy hopes to become the LNG hub for southern Europe and signed a pact on Tuesday with Canada to explore ways to exploit LNG markets and technology together, though details were lacking. "What was generally accepted in terms of energy supply and security is that we need a great mix and that's where we think Canada can play a role," Mr. Rickford said.

He said that the Americans have a similar view about the export potential of LNG. American energy exports, however, are illegal unless the destination country has a free-trade agreement with the United States. The EU is working on trade pacts with both the United States and Canada; negotiations with the Canadians are more advanced.

The Ukraine crisis overshadowed the energy conference and influenced several items in the ministers' joint statement, from the need to diversify supplies to welcoming the gas agreement between Slovakia and Ukraine. Signed last month, the deal will see some European gas exported through Slovakia to Ukraine to reduce Ukraine's dependence on Russian gas. Another "reverse flow" deal has been struck between Ukraine and the German utility RWE.

While the G7 ministers are wary of political and economic power posed by Russia's commanding share of the European gas markets, they are, at the same time, generally in support of a new pipeline, called Southstream, that Gazprom is about to build between the Black Sea and Austria.

But with the Ukraine crisis dominating the political agenda, the EU is doubly keen to ensure that the pipeline meets the EU's stringent competition rules. That rules are designed to prevent gas monopolies, where the supplier of the gas is also has control of the pipeline. The EU wants Gazprom to ensure that competing gas suppliers gain access to Southstream's capacity. "These days, exemptions are not my priority for Gazprom," EU energy commissioner Gunther Oettinger told the Financial Times in article published Tuesday.

Gazprom appears to have miscalculated the North American shale gas bonanza and its potential effect on the global gas markets. A continued strong presence in Europe, its most profitable market, is crucial to its long-term success as well as the viability of Russia's budget. At last count, Gazprom's annual gas exports were worth $66-billion, equivalent to 13 per cent of Russia's total exports. It is the country's single biggest export earner.

Competing supplies, falling demand in Europe and the financial crisis have been hard on Gazprom's stock market value, which has slipped to about $90-billion from $250-billion in 2008. Some analysts think Gazprom will fight hard to keep its export sales intact, even if it means dropping its prices to ensure that LNG's market share does not surge.

At the Rome energy ministers' meeting Mr. Rickford took U.S. energy secretary Ernst Moniz aside to try convince him of the economic and environmental benefits of the Keystone XL pipeline, which would take Alberta crude to Nebraska.

The U.S. state department has delayed a decision on whether to approve the pipeline's construction, pending a Nebraska court decision over whether the state violated its own constitution when it approved the pipeline route. "We've been clear that the benefits of this project from a business and environmental case are accepted by science and by fact," Mr. Rickford said, adding that the two men did not dwell on Keystone because it was peripheral to the G7 meeting's agenda.

Bombardier looking at potential for sales to Iran and plane assembly in China
May 12, 2018 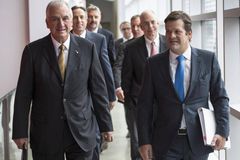 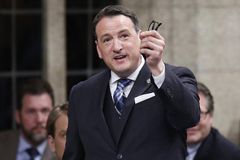