Efforts to resolve the prolonged Greek debt crisis have been set back even further amid a high-stakes deadlock between France and Germany, despite a push by the Group of 20 to have a plan in place by Sunday night.

As social unrest mounted in Greece Thursday, and a new report indicated even a second bailout may not save Athens, leaders of the euro zone were forced to schedule a second summit as the two main players at the table remained divided on key issues.

The tense stalemate, and the decision to call another meeting, underscore the difficulty of forging a plan in a 17-member monetary union. But time is running short as Greece teeters on the brink of bankruptcy.

France and Germany, the driving forces behind the launch of a definitive package, announced Thursday that no decisions will be made at a summit in Brussels on Sunday. Rather, a second meeting will be held no later than next Wednesday.

The goal remains the same, to present a package at a meeting of Group of 20 leaders in Cannes in early November, though German Chancellor Angela Merkel has hinted that some issues might not be resolved until next year.

The main sticking point appears to be conflicting views on how to expand and finance the €440-billion ($616-billion) bailout fund, known as the European Financial Stability Facility, or EFSF. France wants to turn the EFSF into a bank and boost its firepower with the financial backing of the European Central Bank. But Germany rejects that idea.

Differences also remain over how much losses Greece's creditors, most of which are euro zone banks, should be required to absorb as part of the bailout strategy.

The EFSF, which has been set up as a corporation jointly owned by the 17 euro zone governments, is being designed to lend money to member countries in a financial squeeze, finance the recapitalization of troubled banks through loans to their governments and intervene in debt markets to restore stability. The member countries have agreed to put up guarantees to backstop the fund. But many are not keen to make even bigger commitments that could put their own finances – and their bond ratings – at risk.

"The EFSF is still only a manual spray gun and not a big bazooka," Carsten Brzeski, senior economist with ING Group in Brussels, said in a note. "Simply increasing the size of the EFSF by more state guarantees … is hardly possible in the current situation. More euro zone countries could lose their triple-A ratings upon higher guarantees, thereby toppling the entire EFSF construction."

Ms. Merkel and French President Nicolas Sarkozy affirmed in a joint statement that they are aiming for a "comprehensive and ambitious" plan by no later than next Wednesday.

But as France and Germany squabbled over these issues, Greece, the epicentre of the crisis and the first of three euro zone countries to receive a bailout, was crippled by a second day of strikes, protests and riots. These came ahead of Thursday night's austerity vote in the Greek parliament, which went in favour of the socialist government of Prime Minister George Papandreou by a narrow margin.

All but one of his PASOK party deputies voted in favour of the new round of austerity measures, the seventh since Greece's mountain of debt triggered the sovereign crisis in 2009. The new measures will reduce civil servants' wages by a further 14 per cent, cut the head count by about 30,000 by the end of the year and trim pension benefits.

Approval was required before the International Monetary Fund would agree to deliver the next €8-billion instalment of last year's €110-billion bailout package. Athens has warned it will run out of money next month without the loan.

Even though the instalment will be paid, Greece's international creditors warned that the country is in such dire economic shape that the second rescue package, agreed in July and worth a further €109-billion, may not be enough to spare it from bankruptcy. The so-called troika overseeing the bailout terms – the European Commission, the ECB and the IMF – warned in a report obtained by the Financial Times that Greece's "debt dynamics remain extremely worrying," compared with the country's outlook only a few months ago. 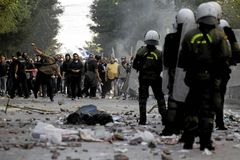 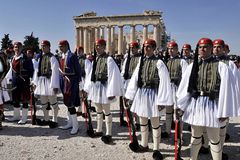 Follow Eric Reguly and Brian Milner on Twitter @ereguly @bmilnerglobe
Report an error Editorial code of conduct
Due to technical reasons, we have temporarily removed commenting from our articles. We hope to have this fixed soon. Thank you for your patience. If you are looking to give feedback on our new site, please send it along to feedback@globeandmail.com. If you want to write a letter to the editor, please forward to letters@globeandmail.com.
Comments