Germany will shut all its nuclear reactors by 2022, parties in Chancellor Angela Merkel's coalition government agreed on Monday, in a reaction to Japan's Fukushima disaster that marks a drastic policy reversal.

As expected, the coalition wants to keep the eight oldest of Germany's 17 nuclear reactors permanently shut. Seven were closed temporarily in March, just after the earthquake and tsunami hit Fukushima. One has been off the grid for years.

Another six will be taken offline by 2021, Environment Minister Norbert Roettgen said early on Monday after late-night talks in the chancellor's office between leaders of the centre-right coalition.

The remaining three reactors, Germany's newest, will stay open for another year until 2022 as a safety buffer to ensure no disruption to power supply, he said.

Ms. Merkel backtracked in March on an unpopular decision just months earlier to extend the life of aging nuclear stations in Germany, where the majority of voters oppose atomic energy.

Her Christian Democrats (CDU), their Bavarian sister party the Christian Social Union (CSU) and junior coalition partner the Free Democrats (FDP) met on Sunday after an ethics commission ended its deliberations this weekend.

"It's definite: the latest end for the last three nuclear power plants is 2022," Mr. Roettgen said after the meeting. "There will be no clause for revision."

Some politicians had wanted a clause allowing for the agreement to be revised in future. The FDP had wanted no firm date but rather a flexible window for the exit, plus the option of bringing back at least one of the seven oldest nuclear reactors in case of emergency.

The coalition agreed to keep one of the older reactors as a "cold reserve" for 2013, if the transition to renewable energies cannot meet winter demand and if fossil fuels do not suffice to make up for a potential shortfall.

The German decision still needs to go through parliament and leaders of the opposition Social Democrats and the Greens were present at parts of the meeting to enable a broad consensus.

The decision could still face opposition from RWE, E.ON, Vattenfall and EnBW, the utility companies that run the 17 plants, mostly because of plans to keep a disputed nuclear fuel rod tax.

The coalition wants to retain the tax, which was expected to raise €2.3-billion ($3.29-billion) a year from this year, but so far has not been levied. With the immediate exit of eight plants, however, it will raise less than envisaged.

Sources had said the government was mulling scrapping the tax in return for the four big power providers supporting an earlier exit from nuclear energy and not suing the government for its policy U-turn.

Before Ms. Merkel shut down the oldest plants for three months, Germany got 23 per cent of its power from nuclear plants.

Her about-turn has done little to regain her support, but has drawn scorn from the opposition and from within her own party ranks. Tens of thousands of people demonstrated against nuclear energy at the weekend all across Germany.

Nuclear policy is heavily disputed in Germany and the issue has helped boost the Greens, which captured control of one of the CDU's stronghold states, Baden-Wuerttemberg, in an election in March.

Ms. Merkel's majority in the Bundesrat upper house vanished last year after the CDU failed to hold onto North Rhine-Westphalia, Germany's most populous state. Losing Baden-Wuerttemberg, a vote held after Fukushima and fought in part over energy issues, dealt another blow to Ms. Merkel's authority.

Fukushima's ripple effects on nuclear power in Canada
May 1, 2018 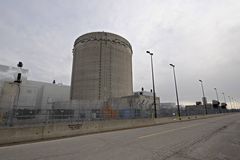