Suppliers to companies such as Nike Inc. and Hugo Boss AG are racing to ensure their T-shirts and sneakers reach buyers in time for the year-end holiday season after the collapse of Hanjin Shipping Co. left an estimated $14-billion (U.S.) worth of goods adrift.

Esquel Group, a Hong Kong-based manufacturer for fashion brands including Nike, Hugo Boss and Ralph Lauren, is hiring truckers to move four stranded containers of raw materials to its factories near Ho Chi Minh City as soon as they can be retrieved from ports in China. Liaoning Shidai Wanheng Co., a Chinese fabrics importer and a supplier to Marks & Spencer Group PLC, has made alternative arrangements for shipments that were scheduled with Hanjin.

"Our production lines are waiting," said Kent Teh, who runs Esquel's Vietnam business. "We potentially have to take airfreight to deliver the garment items to clients in the U.S. and U.K."

Besides apparel, such goods as handbags, televisions and microwave ovens are among those stranded at sea after South Korea's largest shipping company filed for bankruptcy protection last week, setting off a series of events that roiled the global supply chain. A U.S. court on Tuesday provided a temporary reprieve, which may help vessels call on U.S. ports without the fear of being impounded. Any major bottlenecks ahead of the holiday season could put a dent in the two-month shopping season, which netted some $626-billion of U.S. sales last year.

Supporting Hanjin's Chapter 15 U.S. Bankruptcy Court petition, Samsung Electronics Co. said in a court filing that about $38-million of its goods were on board two Hanjin vessels off Long Beach, Calif. Its visual display business division has parts and finished goods in 304 containers meant for its factory in Mexico, while its home appliance business unit has refrigerators, washing machines, dishwashers and microwave ovens in 312 containers.

If the cargo isn't unloaded immediately, the company will be forced to transport alternative parts by air to help meet contractual obligations at "great costs," Samsung said. For example, it would have to charter at least 16 planes at a cost of about $8.8-million to move 1,469 tons of goods, it said.

"All these costs and delays will be a loss not only to Samsung, but also to major retailers in the U.S. and, ultimately, to U.S. consumers," Samsung said in the filing.

As parent Hanjin Group and the South Korean government consider steps to salvage the shipping company, retailers in the U.S. last week called for measures to help temper losses. About 86 of Hanjin's ships were stuck at 50 ports in 26 countries, with vessels turned away out of concern the company has no cash to pay various docking fees and handling charges. A favourable ruling from a U.S. bankruptcy court this week protected Hanjin's assets in the U.S. against creditors, while the shipping line proceeds with its reorganization in South Korea.

With cargo stuck on ships, Esquel's Mr. Teh estimates a production delay of about a week and a doubling of transport costs. Besides truckers, a faster ship will be hired to transport the items from Hong Kong, he said. He also plans to fly finished products out of his factories to meet deadlines.

Nike and Ralph Lauren declined to comment, while Hugo Boss didn't immediately respond to an e-mailed request for comments.

"Retailers' main concern is that there's millions of dollars worth of merchandise that needs to be on store shelves that could be impacted by this," Jonathan Gold, vice president for supply chain and customs policy at the National Retail Federation trade group, said last week.

In last-ditch efforts to pull the shipping company back from the brink, Hanjin Group said Tuesday it will provide 100-billion won ($92-million), including 40-billion won from chairman Cho Yang Ho, to help contain disruptions in the supply chain. Separately, South Korea's ruling Saenuri Party asked the government to offer about 100-billion won of low-interest loans if the group provides collateral. 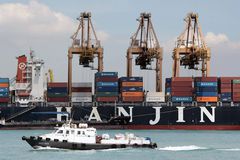 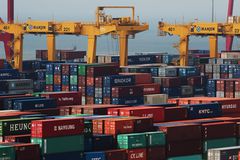