Computer hackers forced the Hong Kong stock exchange's website to crash, prompting the bourse to suspend trading in the shares of seven companies including HSBC and the exchange operator itself.

When the results were released, the exchange said that market structure reform and platform infrastructure upgrades were "essential" for preparing it for increasingly intense global competition.

HKEx is the second high-profile global exchange to admit to an attack this year after Nasdaq OMX, which owns the second-largest U.S. exchange, said criminals had tried to penetrate a web-based service service for customers. In both cases, the exchanges stressed that their trading systems had not been affected.

The trouble in Hong Kong began when the website, on which local-listed companies announce price sensitive information, went off-line late on Wednesday morning, leaving investors in the dark.

"Our current assessment is that this is the result of a malicious attack by outside hacking," Charles Li, HKEx chief executive, told reporters at the exchange's results presentation on Wednesday.

Mr. Li said he did not know who the hackers were or what they hoped to gain from the attack. "We're digging into that particular question right now," he said.

As a result, HKEx took the decision to suspend trading in the shares of the seven companies that were due to make announcements during the lunch break, including China Power International and the airline Cathay Pacific.

HSBC, the most liquid stock in Hong Kong, was also suspended. The bank, which is also listed in London, confirmed during the midday break the sale of its US credit card business and retail services unit to Capital One Financial.

The world's largest exchanges have been beefing up security after the Nasdaq hacking attack, which sparked an investigation by the Federal Bureau of Investigation. Nasdaq admitted last month it was under "literally constant attack" from hackers every day.

Experts say that breaking into an exchange's trading system would be extremely hard because of the multiple layers of security. Many exchanges also run their trading operations away from the internet on a separate private network, often with its own computing language.

When its news website was down, HKEx told market participants to obtain listed company announcements via its bulletin board, a old backup website used in emergencies.

The exchange is placing advertisements in Hong Kong newspapers to inform retail investors about the unprecedented situation.

If the website remains unstable on Thursday, the bulletin board will be used to disseminate information but stocks will be not suspended, said Mark Dickens, head of listing at HKEx.

The exchange has drafted in a team of external computer experts to work out how the website was brought down. It has reported the attack to the Securities and Futures Commission, Hong Kong's securities regulator.

The exchange emphasized that its other systems were not affected and trading in its securities and derivatives markets continued to operate normally. The bourse's core trading systems are not directly connected to the internet, it said.

HKEx is the latest prominent company to suffer from cyber attacks. Sony, the Japanese electronics group, disclosed in April that more than 70m users of its online gaming network had their personal details stolen by a hacker.

McAfee, the computer security company, said last week that it uncovered a five-year long campaign of cyber attacks on the networks of governments, organisations and businesses, including the United Nations and 13 defence contractors.

HKEx announced profits of about HK$2.6-billion ($333-million U.S.) in the first half, an increase of 14 per cent compared with the corresponding period last year, in line with analyst expectations.

The company's shares had jumped 2.6 per cent before being suspended from trading during the midday break.

McAfee says it has uncovered biggest-ever series of cyber attacks
May 3, 2018 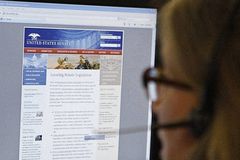