The mess that is now the Jersey Shore is a potent reminder of nature's fury, but also of misguided government overreach.

Driven by Sandy's storm surge, beaches rolled as much as a kilometre inland, swallowing everything in their path, including homes, roads, boardwalks and amusement parks.

Nothing could have stopped the super storm. But a lot of the wreckage was avoidable.

That raises an uncomfortable question as millions of coastal residents try to rebuild their shattered lives. Why was so much built on the narrow barrier islands and shifting sands that dominate the 200-kilometre New Jersey shoreline, and much of the U.S. coast line?

"The view" is only part of the answer.

Decades of counterproductive policies have encouraged millions of Americans to build, and live, where they should not – in the direct path of storms, such as Sandy.

Since the 1960s, the U.S. government has offered subsidized flood insurance, even in known flood zones. Washington got into the business because the private sector would not. Now the government is in too deep and unable to escape. Summer beach houses have morphed into valuable year-round homes in many areas.

The losers: everyone else. Even before Sandy, the federal flood insurance scheme was $17-billion (U.S.) in the hole. It will soon have to dip into the U.S. Treasury again to meet its obligations.

Reforms passed by Congress last summer put the program on a stronger actuarial footing, forcing homeowners to pay closer to the real cost of the insurance. But it remains a costly and misguided incentive.

In Canada, the federal and provincial governments have wisely stayed out of the flood insurance game. The result is that most Canadians have no flood insurance at all, and no backstop when they build in risky coastal areas.

But Canada's property and casualty insurance industry has been quietly lobbying governments to get involved. In a 2010 report, the industry-funded Institute for Catastrophic Loss Reduction called for an ill-defined "partnership" between the insurance industry, government and homeowners to offer flood insurance, which isn't available now.

The report offered no estimate of what the scheme would cost government, but concluded that flood insurance could be a "business opportunity" for the industry.

The U.S. experience screams out: "Don't go there."

After each storm, the U.S. government rushes in with financial relief to mitigate a disaster its own policies helped create.

Between disasters, billions more in federal and state cash is sunk into "beach nourishment." That's the costly process of rebuilding beaches by sucking sand from the ocean floor and dumping it back onto beaches, often kilometres away.

The money inevitably washes out to sea with the sand. The U.S. Corps of Engineers recently completed several major projects on the Jersey Shore, including one in Atlantic City, N.J. Now, the beach is gone. Even without storm damage, nourishment projects typically last just five years, according to Taxpayers for Common Sense.

Here's the real tragedy of Sandy. Scientists say storm destruction is intensifying due to human-caused global warming. But beach erosion is all-natural.

Left untouched, barrier islands, which provide a natural protection for the coast, will migrate inland with each storm season. Like waves, new sand bars form offshore. Even without hurricanes, beaches in many places are vanishing at a rate of a metre per year.

Drawing a line in the sand – with roads, boardwalks and expensive homes – disrupts this natural process and inhibits the land's ability to absorb water.

On North Carolina's Outer Banks, authorities must regularly rebuild some roads as the sea pushes the island towards the mainland, sometimes annually. The same is true of beach nourishment. Millions is spent on a beach that is often gone within a few years.

It's a slippery slope for governments. Once on board, it's a signal to homeowners and developers that it's okay to build – even when it may not be. Those same developers and homeowners become a powerful lobby to keep government involved.

And then when disaster strikes, the government is responsible for the fallout. 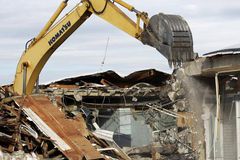 Apocalypse NYC: Been there, seen the movie
November 9, 2012 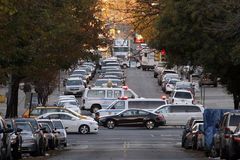 Criticism grows of efforts to save research animals from Sandy's path
November 7, 2012
Hope and despair for voters in Sandy's wake
November 6, 2012 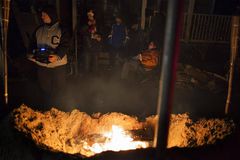