It's the only beauty pageant with the potential to rattle financial markets.

A group of high-profile hedge-fund managers paraded their best investment ideas before an admiring audience in New York on Monday, part of an annual ritual that can deflate or pump up stocks – and reputations.

Eleven presenters competed to flaunt their trading ideas at this year's Sohn Investment Conference, highlighting bets they believe are either out of favour or overestimated.

The future of the U.S. housing market was at the centre of two presentations by well-known investors. Bill Ackman of Pershing Square Capital Management LP made a bullish case for owning shares of mortgage-finance giants Fannie Mae and Freddie Mac, despite the fact the U.S. government currently controls the firms and their profits.

By contrast, Jeffrey Gundlach, chief executive officer of investment firm DoubleLine Capital LP and a renowned bond investor, sounded a warning note about the U.S. housing market. The United States is witnessing a generational shift toward lower demand for single-family homes, he argued.

The conference which helps to raise money to combat pediatric cancer, has been a launching pad for some memorable investing crusades. In the spring of 2008, David Einhorn of Greenlight Capital used the event to lay out a critique of Lehman Brothers, months before the investment bank collapsed.

On Monday, Mr. Einhorn said that Athenahealth Inc., a medical technology firm, was on his list of "bubble stocks." The consequences for its shares were immediate. They fell nearly 10 per cent in after-market trading.

For his part, Mr. Ackman decided not to focus on his latest campaign, an unorthodox partnership with Canada's Valeant Pharmaceuticals International Inc. to take over Allergan Inc. Instead, he elaborated on his enthusiasm for Fannie Mae and Freddie Mac.

Holding their shares is akin to "owning a royalty on every mortgage written in America," Mr. Ackman said. Once reformed and loaded with sufficient capital, Fannie and Freddie can become "two of the most profitable businesses in the world."

The small obstacle to that thesis: the U.S. government. Legislators are considering a plan to restructure the two mortgage-finance giants, something Mr. Ackman and other investors oppose. . Some of those investors are suing the government, alleging that it is improperly absorbing nearly all the profits now generated by the two firms as dividends. Since 2008, Fannie and Freddie have operated as wards of the federal government.

Mr. Gundlach of DoubleLine used his moment in the spotlight to argue that the market for single-family housing in the United States is "overbelieved and overrated." The notion that there is pent-up demand for such housing is false, he said. Surveys show that Americans of every age group are more likely to consider renting than they did in the past, while young adults are living at home in much higher numbers.

"The kids aren't all right," he said. "Young people were shocked and scarred by the housing collapse." He recommended placing a bet against an exchange-traded fund that groups together the shares of U.S. home builders.

Zach Schreiber of PointState Capital LP, a new presenter at the conference, argued that the price of crude oil is headed for a tumble. "Crude strength has led to complacency and complacency is a killer," he said.

Another common theme at the conference was the dismal environment for so-called "macro" hedge funds, which make broad bets on asset classes such as currencies and bonds. Market volatility is so low at the moment that there are few profits to be found, several presenters said.

"I actually find myself daydreaming about winning Dancing With The Stars on some days in the office," said Paul Tudor Jones, the founder of Tudor Investment Corp. "It's gotten to be very difficult when you depend on price movement to make a living, and there is none."

Ackman urges Allergan to negotiate with Valeant
May 5, 2014 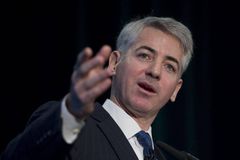