The provisional agreement on a Trans-Pacific Partnership on trade has rattled Brazil, further threatening an already battered economy and eroding the country's status as the economic and political leader in South America.

"Everyone in Brazil has been sleeping at the wheel while the negotiations have been going on – and it's suddenly sinking in and people are realizing this could be very, very negative," economist Monica de Bolle said. "There was no sense of urgency."

The TPP would create the world's largest free-trade zone among 12 countries around the Pacific, including Chile and Peru. South America's other hot economy, Colombia, has observer status to the pact and is expected eventually to become a full member.

"The countries that are doing better will be looking to TPP rather than to Brazil as a main trade partner – it's inevitable that Brazil is going to lose its clout on the continent as a whole," said Ms. de Bolle, who is a fellow with the Peterson Institute for International Economics in Washington.

Brazil, until this year the world's sixth-largest economy, has no Pacific coast, of course, but did not seek even observer status at the talks. Talks about a free-trade deal with the United States and with the European Union have been frozen for years, and the entire idea of liberalized markets has been unpopular with successive left-wing Workers' Party governments.

Instead, Brazil has been intensely focused on domestic issues: An economic crisis and a massive graft scandal have combined to paralyze government. President Dilma Rousseff's approval ratings are at 10 per cent. Inflation is at 10 per cent. The economy has shed more than a million jobs in the past 12 months. The currency has lost 35 per cent of its value against the U.S. dollar in the past year. And there is no good news on the horizon.

The one silver lining in the currency depreciation was a boost for Brazil's exports. But the TPP will undermine the export sector, said Diego Bonomo, who heads the foreign-trade unit with Brazil's National Confederation of Industry in Brasilia. Last year, 24 per cent of Brazil's exports went to TPP countries, including more than a third of manufactured goods.

There will be immediate effects, on, for example, agribusiness, one of the few sectors in Brazil that is doing well at the moment. Brazil's animal protein businesses stand to be most affected by concessions between the United States and Japan; Australia, a key competitor for Brazil, will now have advantageous access to both markets as well. "I'm upset and worried," said Luiz Cornacchioni, director of the Brazilian Association of Agribusiness, noting that Brazil is one of the world's major food producers. "We should be leading this," he added.

Mr. Bonomo predicted Brazil will face more competition in the consumer-goods markets in Peru, Chile and Mexico; a tougher market for machinery and equipment in Chile and Peru; and be shut out of Mexico's automotive sector.

Longer term, and perhaps even more damaging, he said, is that the TPP creates a number of trade rules Brazil had no part in negotiating, but that will be the reference for any new pacts with them.

The United States will now focus on a transatlantic agreement, Mr. Bonomo added. "The U.S. and EU are the two most complementary countries for Brazil, the blocs with which Brazil has the most to gain from trade agreements, and if they reach an agreement between themselves, before Brazil has agreements with any of them, that will create a much larger trade diversion for us and be a big blow for industry."

Brazil is a member of Mercosur, the Southern Common Market that was created in 1991, which has a customs union but has never become the free-trade area envisaged. In theory, trade agreements with Brazil should be negotiated through Mercosur, not bilaterally.

"Mercosur was supposed to be a beginning – it wasn't supposed to be the last agreement Brazil signed," Mauricio Mesquita Moreira, the principal adviser on trade and integration with the Inter-American Development Bank, said with a sigh. Mr. Bonomo said Brazilian politicians and industry leaders all concluded back in 2008 that big trade deals were "dead for good" and never caught up when the Obama administration re-engaged actively with free markets.

From Washington, Ms. de Bolle said the United States has been actively attempting to engage the Brazilians in laying at least a framework for regulatory convergence toward free-trade negotiations. "On the U.S. side, there is a lot of frustration: Everything has stalled because of the political crisis in Brazil – and the system is still contaminated with a lot ideologues."

Successive Brazilian governments over the past 12 years have pursued more isolationist policies, increasing local-content requirements and moving away from, rather than toward, global value chains. Ms. Rousseff reopened an agreement with Mexico and raised import tariffs to try to block Chinese automotive imports. Most analysts here agree that the TPP may sufficiently alarm the private sector that it prompts a push on trade. But it is unlikely this government will be in a position any time soon to advance agreements. "There are signs Dilma [Rousseff] is interested," Mr. Moreira said. The government released a "national export plan" in June, the first definitive statements on trade in seven years; it included a list of target countries to target for free-trade agreements, Canada among them. He expects to see small steps – frameworks for discussions with both the United States and Japan – in the next year.

"But I don't think she has the political clout to push something like this … You would need a strong president to take this on."

The current political crisis, he added, might paralyze the government for the next three years. "And Brazil can't afford to wait – the world economy is not waiting for Brazil to fix its domestic problems." 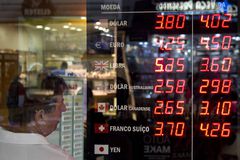 Brazil’s currency is getting hammered
September 22, 2015 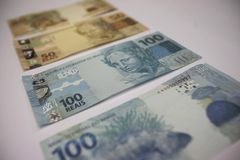