The senator shuffled his papers and ran through a list: Five separate federal investigations into corruption. Wild overpayments for new facilities. A monstrous debt.

"We are not talking here about the local grocery store, but about the biggest company in Brazil," Pedro Taques said when the government summoned the chief executive of the national oil company to an inquiry into its operations a few weeks ago. "How can a company this size commit these kinds of mistakes?"

The CEO stiffened visibly at the question. "Petrobras is not, it is not, a local grocery store," Maria das Graças Silva Foster said sternly, her dark eyebrows drawn down into a V. "Petrobras is an absolutely serious oil company, distinct from other oil companies throughout the world, due to the challenges it faces every day."

The woes of Petroleo Brasileiro SA dominate the news in Brazil these days. A market star just a few years ago, Petrobras is beset by graft scandals, has stagnant production levels and is the world's most-indebted oil company. It is worth 40 per cent less today than it was in 2011. Ms. Foster told the senate these issues originated prior to her tenure and are being addressed.

Yet Petrobras remains the undisputed backbone of the economy in a nation where growth has slumped badly – and a hotly-contested federal election looms. Ms. Foster left this challenge unmentioned. In Brazil today, Petrobras is much more than an oil company, and that leaves Ms. Foster caught between ambition and loyalty, between the president and the people.

Graça Foster, as she likes to be called, is low profile within Brazil and almost unknown outside the country, but she is an extraordinary figure: a woman, in a still strongly chauvinist country and a markedly male-dominated industry, the first to head Petrobras and one of just a handful in the world to run an energy major. Perhaps equally remarkable for Brazil, she comes not from the moneyed elite, the traditional powerbrokers, but from poverty, from a hardscrabble favela neighbourhood.

She has spent nearly her entire career in Petrobras, as a drilling engineer, on a platform, then rising through the management ranks. And she is widely acknowledged to be a skilled administrator with an encyclopedic knowledge of every aspect of the energy business.

But if anyone is looking to Ms. Foster for bold action to boost Petrobras's slumping fortunes, politics stands in the way.

"She is absolutely loyal," said Francois Moreau, an oil industry veteran who has sat across from Ms. Foster at a negotiating table many times over the years. But, "in reality she is not the president, she is a lieutenant."

Brazilians go to the ballot box in October, and president Dilma Rousseff's popularity ratings are declining by the day. Determined to keep inflation in check, she will not allow Petrobras to raise fuel prices, forcing it to sell imported diesel and gasoline at a loss – costing the company $8 billion in 2013 alone.

Millions of jobs are directly or indirectly tied to the firm: Ms. Foster announced recently that the company will invest $220-billion over the next five years. At the same time, strict local-content rules oblige Petrobras to purchase from chronically inefficient Brazilian suppliers.

"The main problem in the last 10 to 15 years has been the [politicization]: the company is being used to fulfill nationalistic missions," said John Forman, former director of the Brazil Oil Agency, know by its Portuguese acronym ANP. Since the far-left Workers' Party was first elected in 2003, Petrobras has been used as the kitty for populist policy, he said.

Ms. Foster knows that all of that would have to change, if she was to do right in strict business terms by Brazilians (who own 60.5 per cent of Petrobras) or its private shareholders, who bought in during a historic 2010 offering and have since seen the company lose half its market value.

Ms. Foster met President Rousseff in the late 1990s when Ms. Rousseff was an energy official in a southern Brazilian state. She went on to become energy minister, and made Ms. Foster one of her senior aides, but the engineer who was used to getting her hands dirty lasted only two years in the capital before returning to Rio and Petrobras. Ms. Rousseff named her to the top of Petrobras not long after she took office in 2012. "She was appointed because she's very close to Dilma, Dilma trusts her, and she wants someone who will give orders straight and be very tough," said Mr. Forman.

"You can tell it bothers her – of course it does," said Silvio Sinedino, who represents workers on Petrobras' governing council, which Ms. Foster chairs and where, he said, there are fierce debates about how the company will be run. "If she could, she would do the right thing." He adds: "You can feel in the meetings that she knows what needs to be done … but what the government is doing at Petrobras these days is what they feel has to be done, and she's loyal."

Ms. Foster's family is from Brazil's interior and migrated to Rio seeking work. She grew up in a sprawling favela called Complexo do Alemao. In a story that has become something of a Brazilian legend, she went to work at the age of eight, scavenging cans and paper from trash, and wrote letters for illiterate neighbours, to make money for school supplies. Ms. Foster, 60, doesn't say much about her personal life but has alluded to "growing up with domestic violence." She told one Brazilian newspaper that she always worked hard "because I knew I would have to take care of my mother."

She was accepted into a prominent public university to study chemical engineering. Her academic career was briefly derailed when she had a child, but she brought her daughter to class sometimes, graduated, and went on to obtain a postgraduate qualification in nuclear engineering (and later an MBA). She went to Petrobras right from school. Starting as an intern in research labs, she later was the second woman in the country's history to work on a platform.

"There are people who wear the coverall to work with the word 'Petrobras' stitched on the pocket and they take that off and the logo is on their t-shirt and if they take that off then the PB is there on their chest as a tattoo…" said Mr. Forman. "She's one of those."

In fact, Ms. Foster's tattoo is said to be of the star logo of her beloved Botafogo soccer club, where she is a regular at games. The oil company president does not own a car, but has a motorbike and takes taxis from Copacabana, her gently decaying seaside neighbourhood. She is a regular at the local Catholic church, and is known as a devoted fan of the Beatles. After two brief marriages, she has been married to an English communications executive for decades, the source of her Anglo-Saxon surname. Ms. Foster speaks Portuguese with a strong Rio accent and a folksy intonation – she peppers her statements with the invocation "Nossa!", short for nossa senhora, an invocation of the Virgin Mary.

But she is known as a ferocious boss. "I admire her, because she follows things closely and she demands answers, but she's muito dura – very hard – she humiliates people," said Mr. Sinedino.

"She's a dedicated work-a-holic, very tough, very hard with her staff – that's her style – and that of course displeases a lot of people, having a woman tell them what to do, and, if they don't do it properly, having to listen to her say 'you're incompetent', especially in a country that is still macho," said Mr. Forman.

Mr. Sinedino speaks in almost sympathetic terms of Ms. Foster's struggles to turn the company around even as the price caps and other rules remain in place. But, he says, she knew what she was getting in to. "She could just say, I'm not staying here, I'm not burying this company, give someone else this job," he observed. "But you can't just walk away from being [CEO] of Petrobras."

There is always the chance that after the election, Ms. Rousseff will loosen her hold on the company, and let Ms. Foster make more reforms, he added. "I think maybe she thinks there is still room to make a difference."

Public focus on Petrobras' scandals ignores its profitability
May 12, 2014 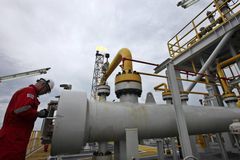