Earlier this year, the billionaire Paul Singer joined the world's financial and political elite for an annual conference in Davos, Switzerland. Sitting in front of a backdrop of snow-capped mountains, the hedge-fund manager fielded a question about his campaign to make Argentina repay its defaulted debt in full.

The country's problems are "self-imposed," said Mr. Singer, calm but steely. "We could settle this thing in an afternoon."

That conviction will be tested this week as the decade-long battle surrounding Argentina's sovereign debt enters its final days. If the nation does not reach a deal with a small group of holdout creditors by July 30, it will default on its debt for the second time since 2001.

No player is more pivotal than Mr. Singer, the founder of New York-based Elliott Management Corp. With his trimmed white beard and rounded glasses, the 69-year old could pass for a professor – that is, a professor who strikes fear into governments and boardrooms alike.

For nearly 40 years, Mr. Singer has reaped outsized profit for himself and his investors, primarily by focusing on bonds that appear to have little chance of being repaid. Trained as a lawyer, he has fought tenaciously in the courts to press his claims. More recently, he has emerged as a high-profile donor to the Republican Party and a fierce critic of the Federal Reserve's measures to stimulate the U.S. economy.

The long conflict with Argentina is a classic illustration of Mr. Singer's style. NML Capital Ltd., a unit of Elliott Management, began buying the country's bonds as Argentina's financial health deteriorated and refused to participate in subsequent debt restructurings, unlike the vast majority of other creditors.

Elliott has deployed an array of aggressive and creative legal tactics in an attempt to force Argentina to pay up, including using Ghana's courts to temporarily seize an Argentine navy vessel.

That has earned Elliott the ire of Argentina's leadership. It calls Elliott and others like it "vulture funds" for their propensity to snap up ailing bonds at a deep discount and then demand what the government says are extortionate repayment terms.

But U.S. courts have handed a series of legal victories to Mr. Singer, pushing the situation to a new precipice. On Friday, a court-appointed mediator once again attempted, without success, to forge a settlement between Argentina and the holdout funds ahead of the Wednesday deadline.

A spokesman for Elliott declined to comment on the ongoing negotiations. Another holdout fund, Aurelius Capital Management LP – founded by a former Elliott employee – did not respond to a request for comment.

It's not the first time Elliott has gone head-to-head with a sovereign government: It also cashed in on defaulted debt issued by Peru and Congo-Brazzaville.

Elliott "can stomach things that other people can't stomach, like making huge profits out of bankruptcies," said Mark Cymrot, a partner at BakerHostetler in Washington, who represented Peru in its debt litigation. "They're very smart, they're very aggressive, they throw a lot of resources at it. Those are the reasons why they often succeed."

It's unlikely that Mr. Singer ever envisaged, early in his career, becoming the bête noire of Buenos Aires. The son of a pharmacist and a homemaker, he grew up in New Jersey and studied psychology before attending Harvard Law School. He worked as a lawyer and then at an investment bank before setting up his own hedge fund in 1977 with $1.3-million (U.S.).

Elliott – which is Mr. Singer's middle name – started out focusing on convertible bonds, but the firm later gravitated toward distressed debt. It has made hugely profitable bets in recent landmark bankruptcy proceedings, including Lehman Brothers and auto-parts maker Delphi. Although Elliott specializes in beaten-down bonds, it also buys stakes in companies and pushes them to change course. Today it manages $25-billion, with an average annual return since its inception of more than 14 per cent.

"They have deep respect for the rule of law and they expect others to share it," said Mr. Buckfire.

And if they sense others don't?

"I think you know the answer," he replied.

Mr. Singer's wealth and staunch conservative principles have turned him into an increasingly influential donor to Republican candidates and likeminded outside groups. He was a major supporter of Mitt Romney's failed bid for president in 2012 and is the chairman of the Manhattan Institute, a prominent conservative New York think tank.

He has expressed dismay at the rhetoric surrounding income inequality. "Resentment is not morally superior to earning money," Mr. Singer wrote in a 2012 letter to investors.

In one area, however, Mr. Singer is a social liberal. He strongly supports same-sex marriage and has contributed millions to efforts to legalize it across the U.S. At a fundraiser in 2010, he fondly recalled the wedding of his son and son-in-law in Massachusetts, according to the New York Times.

Now his long pursuit of Argentina is nearing a close. Time is nearly gone for the warring parties to reach a settlement. A federal judge has ruled that Argentina owes the holdout funds more than $1.3-billion. If Mr. Singer does end up getting paid, it would amount to "the most significant litigation victory that a holdout creditor has ever achieved" in the realm of sovereign debt, said Mark Weidemaier, a law professor at the University of North Carolina.

Expect Mr. Singer to be prepared for any outcome.

"I'm rarely optimistic," he said earlier this year during the interview in Davos. That is part of his investing philosophy, he added. For a hedge fund, it pays to be "humble about what's going to happen in the world."

Argentina running out of options in lose-lose debt battle with 'vultures'
July 2, 2014 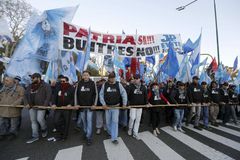