As miners globally look to squeeze more savings amid low prices, the biggest iron-ore miner, Vale SA, will face a sharp increase in costs if a group of legislators in Brazil's mining heartland get their way.

Spurred by Brazil's worst-ever environmental disaster, the proposal would toughen supervision and maintenance at existing waste storage facilities in Minas Gerais state and ban construction of the cheapest type of tailings dams. The draft bill cleared one commission on Thursday on its way to the state assembly, according to the office of state legislator Agostinho Patrus.

The current version would ban so-called upstream tailings dams, the method used at the Vale-BHP Billiton Ltd. joint venture Samarco, where a collapse in November killed 19 people and contaminated waterways in both Minas Gerais and Espirito Santo state.

"We have to balance economic activity with social risk," said Mr. Patrus, one of the bill's sponsors. He expects the ban on new upstream dams to survive alterations the proposal might incur on its way to a final vote. "We can't be thinking about using a method that is 5 to 10 per cent cheaper for the company, yet puts countless communities at risk."

Mr. Patrus presides over a commission created to assess the state's mining risks in the wake of the Samarco accident. That commission voted to send the proposal to a legislative committee that will decide if it should be put to a vote in the state assembly.

The would-be legislation is part of a larger campaign called "Muddy Seas, Never Again" and received more than 50,000 signatures from supporters.

The Samarco breach, which propelled billions of gallons of watery sludge into communities below, came a year after a spill at Imperial Metals Corp.'s Mount Polley mine in British Columbia. A common trait in the two cases was the fluidity of the waste.

Tailings are the ground rock and effluents left over after milling. And when it comes to storage, the dryer the better, Dirk van Zyl, professor of mining engineering at the University of British Columbia, said in November.

Dry-stack tailings facilities, used in Chile where earthquakes are common, can cost 10 times more than upstream ponds, where discharged tailings become the foundation for future embankment raises, Mr. van Zyl said. The next best option, building storage on virgin ground and limiting the amount of water, could cost twice as much, he said.

Upstream dams can coexist with the environment and communities, and banning them would drive up costs and threaten jobs, according to Vale's general counsel Clovis Torres. He said Minas Gerais legislators are aware of mining's relevance to the state economy and are unlikely to pass such a law.

"There are other ways to make sure environmental protection and development coexist," Mr. Torres said.

Vale dominates the local industry, with at least 19 mines in the state that churned out more than 198 million metric tons last year. Its 123 tailings dams in Minas Gerais have a rigorous system of monitoring in place and were built using best international practices, the Rio de Janeiro-based miner's press office said.

Iron ore prices are down about 70 per cent from a 2011 peak after producers like Vale and BHP expanded in response to surging Chinese demand that subsequently waned. The price rout sent miners scrambling to bring down costs and protect margins. For Samarco and its owners, the effect of low prices is being exacerbated by the prospect of billions of dollars in lost income and compensation expenses after the spill.

According to mining engineer Flavio Vasconcelos, who has 20 years experience in the industry in Brazil and North America, upstream dams can reduce costs by about 20 per cent to 30 per cent. Trying to ban them when prices of the steel-making ingredient have slumped to about $55 (U.S.) a ton will be difficult, he said.

"Maybe when prices of iron ore were much higher, during the peak, but at $50 a ton it's not realistic," Mr. Vasconcelos said by telephone from Belo Horizonte, the capital of Minas Gerais. He said another proposed measure – to prohibit dams from being built within 10 kilometers of populations or key waterways – would also be onerous in Minas Gerais. 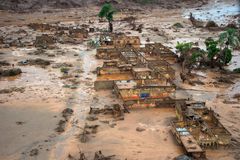 Rescuers seek survivors after mining waste buries Brazilian town
November 6, 2015
Report an error
Due to technical reasons, we have temporarily removed commenting from our articles. We hope to have this fixed soon. Thank you for your patience. If you are looking to give feedback on our new site, please send it along to feedback@globeandmail.com. If you want to write a letter to the editor, please forward to letters@globeandmail.com.
Comments