Ahead of India's budget on Saturday, economists at HSBC described expectations as "sky high." That's a high bar to clear. So in the end, Prime Minister Narendra Modi didn't even try.

There was no "big bang" in Mr. Modi's first full-year budget to match his seismic electoral victory nine months ago. Instead, Finance Minister Arun Jaitley unveiled a measured economic reform agenda that nonetheless could transform the country's economy if the government follows through on all that it promised.

Mr. Jaitley relaxed previous deficit targets, leaving himself wiggle room to design a finely balanced fiscal plan that left opponents with little to criticize. Still, he also likely did just enough to sustain the faith of the international investors who have poured hundreds of billions of dollars into India since Mr. Modi became leader of the first majority government in a generation in May.

Stocks rose at the end of a special day of trading Saturday, reflecting the growth potential in new commitments to spend heavily on infrastructure and to rewrite archaic laws that hamper investment. International companies the world over will have taken note. Bombardier Inc., SNC Lavalin Group Inc., and Stantec Inc. are among the Canadian outfits that could stand to profit.

"People who urge us to undertake big bang reforms also say that the Indian economy is a giant super tanker, or an elephant," Mr. Jaitley said at the end of a 90-minute speech to Parliament. "An elephant, Madame Speaker, moves slowly but surely."

The budget confirms Mr. Modi intends to take a deliberate approach to governing, avoiding unnecessary sparks that could ignite India's highly flammable politics. His winning campaign in 2014 was based on a promise to stoke rapid economic growth of the sort that transformed China in recent decades. There were comparisons to Margaret Thatcher, the British prime minister who battled unions and other specials interests while overhauling the United Kingdom's economy in the 1980s. Many outsiders saw Mr. Modi as a man in a hurry.

The comparisons to Ms. Thatcher neglected the fact that Mr. Modi's Bharatiya Janata Party remained a minority in the upper house of parliament. Economic transformation also will require the co-operation of 29 diverse states, which are set to become bigger players in the economy after Mr. Modi decided last week to increase their share of the general tax kitty to 42 per cent from 32 per cent previously. The BJP won several state elections in the wake of Mr. Modi's landslide victory in May, including Maharashtra, which includes Mumbai, the country's financial capital. Yet the BJP was thrashed in local elections in New Delhi last month despite sweeping the capital in the federal election. Mr. Modi has an adopted a more humble public persona in the weeks since.

Among the highlights Saturday was a promise to cut India's corporate tax rate to 25 per cent from 34 per cent so it can better compete with countries such as China and South Korea for investment. But anyone wanting to accuse the government of favouring business will have to explain the government's decision to boost funding for a rural development program that guarantees 100 days of work for the countryside's poorest people.

Given the absence of blockbuster announcements, the reaction to the budget was remarkably enthusiastic. The Hindustan Times said in an editorial that Mr. Jaitley "stepped out and hit a six," invoking the cricket equivalent of a home run. "The budget will bolster growth in every way," said Kumar Mangalam Birla, the billionaire chairman of the Aditya Birla Group, a conglomerate with interests in everything from cement to chemicals to telecommunications. Chanda Kochhar, the chief executive of ICICI Bank, said Mr. Modi's and Mr. Jaitley's economic plan, "sets the stage for a continuing period of positive change that will result in a transformed nation."

India's main stock index, the Sensex, surged a spectacular 30 per cent in 2014 and had gained another 7 per cent so far this year by the end of last week. Foreign investors are a big reason. India is a rare locus of activity in an otherwise stagnant global economy. The government predicts India's GDP will expand by as much as 8.5 per cent in the fiscal year ending March 31, 2016, a pace that would see the country surge past China to become the world's fastest growing major economy.

There are weak spots in the budget if critics cared to exploit them.

He opted against repealing a law that allows the government to tax business retroactively, leaving in place an important symbol of New Delhi's history of capriciousness. There were a sprinkling of protectionist measures, such as an increase of the import duty on commercial trucks and buses to 40 per cent from 10 per cent. There was no mention of labyrinth system of labour laws that deter companies from hiring.

Mr. Jaitley's decision to retreat on a pledge to shrink the budget deficit to 3 per cent of GDP will get the attention of bond rating agencies. The finance minister said he still will get there, but in three years instead of two. He will be given the benefit of the doubt because, as HSBC's India economists concluded Saturday, the budget offers something the world very much needs: economic growth. 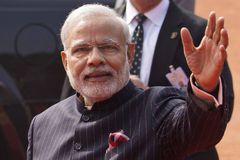 In Japan, the two-tiered nature of a fragile recovery
February 27, 2015 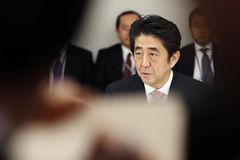