The United States' refusal to pay for its own customs plaza at the planned new Detroit-Windsor bridge has provoked predictable howls of indignation in Canada.

A Toronto Star editorial chastised "deadbeat U.S.A" – the world's richest country – for not coughing up the $250-million it owes.

Canadian government officials have publicly shamed and privately berated their U.S. counterparts for not building their own customs post, as they have for years along the border.

"Our government won't let financing disagreements get in the way of construction timelines," a defiant Transport Minister Lisa Raitt said last month. "We're going to be building a bridge."

The situation would seem all the more outrageous given that Canada is already fronting or guaranteeing the entire $4-billion price of what will be the busiest trade crossing between the two countries: the span, access roads on both sides of the border, ramps and interchanges. All of it.

The narrative of the aggrieved Canadians and the obstinate U.S. is a storyline that plays well at home. The underdog versus the belligerent giant.

The only problem is that it's not true. Ms. Raitt's indignation is disingenuous.

Ottawa has known for at least two years that it was on the hook for the money. Under a 2012 agreement signed with the state of Michigan, the Harper government accepted responsibility for the full cost of the U.S. plaza. The agreement said only that the Crossing Authority, a Canadian government agency, would "enter into discussions with the appropriate U.S. federal agencies" about funding. Barring that happening, the Crossing Authority would be responsible for the "design, construction, finance and maintenance of the U.S. Federal Plaza."

The Prime Minister's office characterized the deal quite differently in a news release accompanying the June, 2012, accord.

"The project will be funded by the government of Canada, with the U.S. plaza being the responsibility of the U.S. government," the PMO said.

Why the Harper government would mischaracterize its own financial commitments is unclear. Perhaps it wanted to avoid accusations that it was wasting Canadian taxpayers' money. Maybe it hoped the U.S. government would eventually come up with the $250-million. It may also have felt uneasy about paying for a symbol of another country's sovereignty.

That hardly matters now. What's disturbing is that Ottawa continues to perpetrate a fiction for domestic political reasons, at the risk of straining relations with the U.S.

Prime Minister Stephen Harper may well be making the calculation that if he wasn't going to get the money he should at least get some political mileage out of standing up to U.S. President Barack Obama.

Many Canadians are only too eager to lap it up. The plaza story reinforces the notion that Canada is constantly mistreated by its heavyweight neighbour.

Mr. Harper and Mr. Obama are already at odds over U.S. delays in making a decision on the cross-border Keystone XL oil pipeline. And as with the bridge, Mr. Harper and his cabinet rarely miss an opportunity to take a swipe at Washington over Keystone.

It's a fair case to make that the U.S. should be paying for its own customs post. Heck, Washington and Michigan should be financing everything on the U.S. side of a bridge that will serve a corridor carrying a staggering $120-billion worth of Canadian and U.S. goods every year.

And the Obama administration may still find a way to secure the funds needed from an increasingly restraint-minded U.S. Congress

But publicly shaming the other side and playing loose with the truth hardly seems like a winning negotiating tactic. Nor is it an appropriate way to treat the recipient of three-quarters of Canadian exports, a close friend and trusted political and military ally.

Canadians have been manipulated. The government said one thing publicly, knowing full well it had agreed in writing to do another.

If the government didn't want to pay for the plaza, it should not have signed the deal two years ago, regardless how eager it was to get the vital trade link built. 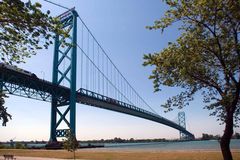 Why Detroit-Windsor bridge could become Canada’s white elephant
May 4, 2014 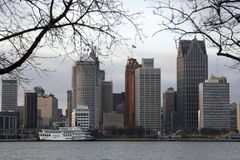