The U.S. Environmental Protection Agency went after the world's second-biggest car company, Volkswagen, and took it down. It would be a modern-day David and Goliath story except the David figure was not really the EPA; it was West Virginia University and a non-profit organization called the International Council on Clean Transportation that initially revealed VW's fraud on its own customers and anyone making use of their lungs.

When they found that certain diesel-powered VW cars were rolling pollution factories in spite of the German company's claims to the contrary, they were kind enough to alert the EPA and the EPA swung into action. The EPA is not the hero in this story. Instead, it was the victim of VW's conspiracy of lies until the university and the ICCT determined that VW's emissions figures were too good to be true.

While VW is guilty of outright deceit, the EPA and other guardians of air quality in the United States, Europe and elsewhere can share some of the blame for giving the impression that most cars are cleaner than they really are. For decades, they published fuel economy and emissions numbers that bore little reality to everyday driving conditions. In some cases, they relied on information from the car makers that would prove misleading or bogus. In many others, their own laboratory tests were too narrowly applied, the equivalent of sampling a couple of food items from a vast buffet to pass judgment on the whole dining experience.

Anyone who has bought a new car in recent years knows that the energy-efficiency stickers from the EPA in the United States and EnerGuide in Canada are exercises in creative embellishment. A tank of gas would almost never go as far as advertised. Therefore fuel emissions could never be as low as advertised, since all combustion creates carbon dioxide. The more fuel consumed, the more CO2 produced, simple as that.

Well more than a decade ago, the Bluewater Network of San Francisco, an environmental group whose targets included the dirty, two-stroke engines then prevalent in personal watercraft and snowmobiles, published a paper called Fuel Economy Falsehoods. It concluded that "fuel economy is actually far lower than government agencies would have us believe." It petitioned the EPA to get its act together. Back then, the EPA's testing methods had gone essentially unchanged for two decades. The tests were tightened up in 2008, but they remain unrealistic, especially in dealing with the peculiarities of the now-ubiquitous hybrid gas-electric vehicles.

The EPA's fuel-consumption calculations are similar to the ones used by the Canadian government, which makes sense since the same cars are sold in both countries. The cars aren't driving around the streets, up hills, on highways or pulling trailers. They are mounted on a dynamometer in a laboratory and run through simulated driving scenarios. Consumption figures are partly extrapolated from tailpipe emissions measurements. The argument in favour of this method is that it ensures that all vehicles are tested under the same conditions; the argument against it is that they miss real-world factors.

The EPA, for example, assumes you're driving about half the time in urban areas, and half the time on the highway. In reality, far more time is probably spent in urban areas, where fuel economy suffers. It doesn't assume that drivers barrel along the highways at 75 miles per hour (120 kilometres per hour), which they often do. In a 2013 article on the difficulties in measuring realistic fuel economy on hybrid cars, Car and Driver magazine said "It's time [for the EPA] to stop extrapolating 75-mph fuel economy from 50-mph tests."

That year, Ford announced that its Fusion hybrid had earned an EPA rating of 47 miles a gallon in both city and highway driving. Consumer Reports magazine got 39 mpg in its tests and Car and Driver recorded only 32 mpg.

The EPA can get outright duped, as it did in the VW case. For years, the EPA's lab tests showed that VW cars complied with Clean Air Act rules. Tests done by West Virginia University and the ICCT found that the real-world nitrogen oxide output of a VW Jetta diesel exceeded EPA standards by 15 to 35 times. The VW Passat was found to be five to 20 times more polluting. No wonder VW had been opposing new controls on carbon dioxide emissions and energy efficiency.

European regulators got smoked too. On Friday, Germany's transport minister revealed that VW had rigged emission tests on about 2.8 million diesel vehicles (in the United States, VW admitted that the software on almost 500,000 of its cars was designed to dupe the air-quality testers). 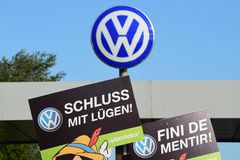