During a bumper year for Italian white truffles, one of fine dining's most precious (read: expensive) ingredients, San Francisco chef Michael Tusk can get practically profligate with the aromatic mushrooms. He'll even use them to top pizza.

"This is probably not a year for that," says the chef and co-owner of Cotogna and the three-Michelin-starred Quince.

Each fall, truffle aficionados around the globe pay dearly to have the lumpen tubers shaved atop risotto, scattered on pasta and draped onto sushi. But white truffles are finicky. Resistant to farming and highly perishable, they grow wild in forests, are hand-hunted by men with trained dogs or pigs and are available fresh only from September into December. In 2016, there was an abundance of truffles and prices plunged, but a hot summer followed by a dry fall this year have made for a dramatically smaller harvest this season.

Fortunato Nicotra, executive chef at New York's Felidia, came by "great truffles" at around $1,300 (U.S.) a pound in 2016, he told Bloomberg. This year, he is paying $2,800 to $3,200 a pound for golf-ball-sized tubers. ("I can't go with a little chickpea to shave in the dining room," he says of the smaller, less-expensive pickings.) Larger sizes are rarer, and anything weightier than 40 grams can cost several hundred dollars more a pound, he says.

"Let's say it is a big problem," Mr. Nicotra says. "I cannot double my prices. But I cannot be without truffles."

Foodies who like to dose their dishes with truffle oils and butters needn't worry – "Prices in preserved products don't fluctuate because they are made with frozen fresh truffles, harvested the season prior," says Federico Balestra, CEO of importer Sabatino Tartufi. But diners may see slightly higher prices for the fresh, musky shavings on menus. Mr. Nicotra says he may have to increase the price of truffle dishes by $10; at the moment, Felidia charges a $75 supplement for a dose of shavings.

Instead, to allow diners the pleasure of eating tuber magnatum (often translated as "noble tuber") restaurants will be eating much of the cost increase, which will cut into already slim margins. On average, food makes up around 28 per cent of the price of a dish, Mr. Nicotra says. When you're dealing with truffles, the food cost rises to 33 per cent – this year, more.

"You don't make money with truffles – you are providing a service," says Michael White, chef and co-owner of the Altamarea Group, who is hosting a series of white-truffle events this November. He says just three of his staffers are allowed to slice the tubers. "There's no room for error – this year, especially."

Beyond simply reducing the number of white-truffle offerings, or cutting them entirely, some restaurants will respond by serving up recipes whose base ingredients not only cost less, but also allow for a lighter hand with the truffles.

"Simple preparations that work well – dairy dishes, eggs, those types of things – are kind of like canvases for the truffles and can cut down on the cost of the overall dish," Mr. Tusk says. In the past, he has offered diners a whole truffle and a scale and let them decide how much or how little they want. Mr. Giordano, the truffle importer, says Urbani is suggesting that chefs shrink portions slightly to offset the high prices. "Maybe you support it with a little bit of truffle butter to help," he says.

Nicotra, meanwhile, is not just worried about prices but availability. The appetite for white truffles tends to peak in October and early November. "The first month, we sell a lot because people wait for a year to have it," he said. "They're saying now if the weather keeps going, it's going to be a problem in November to find any."

Now, Mr. Nicotra is looking to Croatia as a potential source. "They taste slightly different – the soil, the trees, everything is important for the truffle," he says. "I have to say, they are pretty good, though."

Double truffles: Why pairing chocolate and mushrooms isn’t as strange as it sounds
April 2, 2015 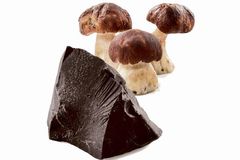