It was a proud moment for defence entrepreneur Ivor Ichikowitz as he watched his first two-seater military airplane landing at an air force base near Pretoria after its inaugural public flight this month.

The tiny, odd-looking turboprop is unimpressive at first glance. It's almost mosquito-like, just 10 metres long and four metres high, with a huge bubble canopy to help its pilots survey the horizon. But it's touted as a revolutionary product: the first fixed-wing military aircraft to be fully designed and built in Africa, and potentially the cornerstone of an emerging African defence industry.

The innovative airplane, powered by engines from Pratt & Whitney Canada, is intended to fill a new niche in the global military sector as an inexpensive light attack airplane for anti-terrorism operations, border patrols, counterpiracy, pipeline security, anti-poaching and counterinsurgency – roles that are increasingly crucial in a turbulent world of radical militias, chronic wars and criminal syndicates.

The plane, known as AHRLAC (Advanced High-performance Reconnaissance Light Aircraft), is still in the flight-testing phase, but is expected to go into production in late 2015 or early 2016. That's almost two years later than the target date when the design was unveiled in 2011. But there is already "really remarkable" interest from potential buyers worldwide, Mr. Ichikowitz said.

"It's an African aircraft, African design and technology, but it's produced for the world. The major interest in AHRLAC is from the rest of the world. A lot of people had seen images of it, but the real thing has certainly got a lot of people flabbergasted."

Mr. Ichikowitz is a controversial figure in South Africa, often denounced for his close connections to politicians across the continent and his energetic lobbying for greater military spending. He says he makes no apology for his financial support of South Africa's ruling party, nor for his willingness to provide jet planes for the leaders of South Africa and Malawi – not always on a commercial basis.

Aside from the furor over his tactics, there is little doubt that Mr. Ichikowitz has been extraordinarily successful as an industrialist. When he created Paramount Group in 1994, just after the collapse of apartheid, his company was primarily just an exporter of surplus South African equipment, at a time when the postapartheid government was drastically cutting back its military budget.

Since then, Mr. Ichikowitz has seen the company grow into the largest privately owned defence and aerospace producer in Africa, with about 2,500 employees worldwide and sales growth of about 25 per cent annually. The company does not divulge its finances, but its revenue is reportedly approaching $1-billion (U.S.) this year.

One sign of his prosperity could be spotted at the Africa Aerospace and Defence trade show at an air base near Pretoria this month. After showcasing his AHRLAC aircraft in a prominent spot on the base, Mr. Ichikowitz strolled across the tarmac to visit the nearby Bombardier pavilion. The purpose of his visit: to tour the luxurious Challenger 300 business jet. He admitted he was there as a potential customer.

Mr. Ichikowitz, 47, has faced criticism for his close ties to South Africa's ruling party, the African National Congress. As early as 2008, he sometimes provided free use of his business jets for leading ANC officials, including President Jacob Zuma and former president Nelson Mandela. Last week, the government confirmed it had leased a jet from Mr. Ichikowitz at commercial rates to fly Mr. Zuma to New York for the annual United Nations assembly.

Mr. Ichikowitz shrugs off the criticism. "I've been a member of the ANC all my life," he says. "I've been an absolutely unashamed supporter of the movement that brought liberation to this country. We make no apologies for the fact we've supported the ANC in many different ways, and one of those ways is making our aircraft available to its leadership when we've been asked to do so."

His company believes in "transparent, open involvement with political parties," he said, adding: "Paramount does very little business with the SA government."

Mr. Ichikowitz became a lightning rod for opposition politicians in Malawi after striking a deal to sell a reported $145-million in patrol boats and other military equipment to the government of former president Joyce Banda. As part of the deal, Paramount agreed to buy Ms. Banda's presidential jet (at what Mr. Ichikowitz describes as an excessive price) to offset the government's debt – but it allowed Ms. Banda to continue using it. The deals sparked a furor in the Malawian election campaign this year, contributing to Ms. Banda's defeat. The new government promised to cancel the contract, but in the end it was "restructured" with unspecified new terms.

Patrick Bond, a researcher and activist at the University of KwaZulu-Natal who has documented Mr. Ichikowitz's political connections, has described him as a "dangerous asset" for Pretoria and the "most aggressive arms-dealing entrepreneur" in Africa.

At an Africa-U.S. political summit in Washington last month, Mr. Ichikowitz was lobbying again. He argued that the United States should encourage the development of an African defence industry to help defeat terrorists and extremists. He called on U.S.-backed institutions such as the International Monetary Fund to stop vetoing military spending by African governments.

This provoked more controversy. One U.S. website, The Daily Beast, suggested that Paramount's slogan should be: "Give war a chance."

Mr. Ichikowitz is convinced, however, that the Obama administration is shifting toward greater support for African defence spending. "There's hardly been an international terrorist incident recently that hasn't had some form of African link, so suddenly security in Africa has become a priority," he said.

"Today we have more democracies in Africa than ever before, and we have responsible governments that need to be supported to have their own security and defence capability. The West should assist African countries to create their own security infrastructure, so they can deal with their own internal threats themselves." 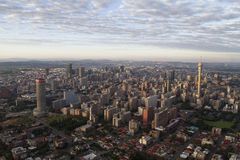 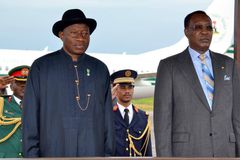