When he talks about the advantages for Canadian companies in South America, Ray Castelli, the chief executive officer of Weatherhaven Global Resources Ltd. in Vancouver, imagines a map folded in half at the Equator. Viewed this way, he says, the countries of the continent are a mirror image of Canada itself – remote, resource-rich areas separated from major population centres by vast, ecologically sensitive regions.

This makes South America a perfect customer for the services, technologies and expertise that Canada has developed to tap into its own far-flung resources, Mr. Castelli notes. Add to that the region's rapid industrialization, its development of new infrastructure and focus on security and emergency preparedness, he says, and the time is ripe for Canadian businesses that serve such markets.

Weatherhaven is a prime example of such a company. It started as an eco-tourism business more than 30 years ago, taking groups on expeditions to places such as Patagonia at the southern end of South America, then turned to making portable, lightweight, protective and reusable shelters for such harsh environments. Today it makes shelters and entire camps for infrastructure and mining projects, the military, mobile hospitals and disaster relief operations in more than 50 countries around the world.

South America is a major focus for the company, which has revenues of about $70-million and does about one quarter of its business on the continent, Mr. Castelli says. Weatherhaven opened manufacturing plants eight years ago in Lima, Peru, and Sao Paolo, Brazil, and has sales in countries across the region.

In terms of strategies, South America has two distinct identities that are important to distinguish between: Brazil, the Portuguese-speaking powerhouse, and the rest of the Spanish-speaking continent, he says. "You need to have two brains: a Portuguese brain and a Spanish brain."

Todd Winterhalt, vice-president of international business development for Export Development Canada, says it is important to consider South America as many unique markets. "It's easy to make the mistake that the entire continent is the same and the opportunities are the same and the risks and the business culture are the same," he says. "You're not setting yourself up for success."

He says that Canada's trade numbers with the region have steadily increased over the past decade. There has been a recent flattening, with growth rates that have declined to 1 to 2 per cent from the previous 4 to 5 per cent, and it has been a "softer year" for the resource sector, given the decline in world prices. "But it's certainly not lights out," he comments. "We look for it to rebound next year and going forward."

Brazil is a huge market, with a population greater than all of the others put together, a burgeoning middle class and a solid industrial base. However, Mr. Castelli notes that over the past year a political corruption scandal involving the government, the country's national oil company and all of its major construction companies has caused uncertainty.

"Many projects have ground to a halt," he says, noting that Brazil has also been crippled by the slowdown in demand for commodities from markets such as China and the drop in oil prices, which is further hitting mining and exploration companies.

Some projects are still going ahead, Mr. Castelli says, including critical infrastructure and road works, as well as transmission lines bringing hydroelectric power from installations in the country's north and projects involving the 2016 Olympic Games being held in Brazil. "The opportunities are still there," he says. "We are still getting the same amount of work but from a narrower segment."

Bill Currie, vice-chair and Americas managing director at Deloitte & Touche in Toronto, says that Brazil's recent struggles, as well as inherent complications such as its language and culture, make it "a challenging place for a foreign company to do business." Other Latin American countries, such as Mexico, Colombia, Peru and Chile, are seen as stronger, more secure and more stable politically, and citizens are often fluently bilingual, making these places more comfortable to do business in.

Canada's trade and investments in the region continue to be resource-based, he adds, but the growing consumer economy in South America means there are more and more opportunities, in the retail and telecommunications sector, for example.

Mr. Castelli says Brazil has a relatively small R&D spend, so new technologies are sought after, although the economy is heavily protectionist. It can be a complex place to do business, with a challenging legal framework and seven layers of taxation, which can add 30 to 40 per cent to the cost of a product. There is also a burden on employers to provide social programs. Benefits such as free meals at lunchtime and an extra month of vacation can add 60 to 80 per cent to salaries, compared with just 18 to 20 per cent for extras in Canada.

In such an environment, having the right business partner is critical, Mr. Castelli says. "You need local Brazilians who have experience and understand the legal framework and the labour law framework, so that you don't get into trouble."

Other South American countries are not as complicated but also not as sophisticated, so working through local experts is equally important, he suggests. "The smartest thing to do is not risk your own capital. It's better to use other people's capital, share the market, find a partner who can do what you do and develop it in a joint venture with them."

Weatherhaven's decision to set up manufacturing in large facilities in South America was especially a result of mining operations opening up there, stemming from changes in local governments and regulations that encourage investment.

Locating in Brazil meant avoiding some of its high tariff walls and taxes, while the plant in Peru has significantly lower costs than in Canada. Another benefit of having a local presence: The plant in Lima exports across South America as well as to Australia and back to Canada, while the one in Brazil exports to Portuguese-speaking countries in Africa, such as Angola, Mozambique and Guinea.

Mr. Winterhalt notes that another advantage of doing business in Brazil is that the country plays an important role in integrative trade, with free-trade agreements in place with several sub-Saharan African countries, with Mexico and with other countries around the globe.

Rather than build its own facilities in South America, Weatherhaven has partnered with fabricators that make the different components, while the company maintains its brand and customer relationship, Mr. Castelli says.

"Without a lot of capital, we can focus our resources on hiring good sales people and good aftermarket support," he explains, noting that the quality of manufacturing in the region is as good as, if not better than, in Canada. "You go into some of these Brazilian facilities and you could be in Mississauga, you could be in Michigan. It's every bit as sophisticated. Every bit as automated. The people you're dealing with are as highly educated."

Before Weatherhaven came to Brazil, worker camps were made out of wood, which came primarily from the Amazon, he says. The buildings were small and damp, with poor air circulation, and the camps were burned down when no longer needed.

The outcry in the past couple of decades about the devastation of the Amazon rainforest brought restrictions on the use of trees from there, driving up the cost of lumber. Weatherhaven offers a lightweight, fire- and mildew-resistant, airier, brighter, environmentally friendly alternative that are fast to erect and redeployable, though at a somewhat higher cost than wood.

One problem for Weatherhaven recently is that half a dozen copycats have emerged making tent shelters in Brazil, he says. To compete, it tries to keep costs down and stresses that its product is superior to low-quality knock-offs. Its specialty is working in hard-to-reach areas and delivering whole camps, including sewage systems, energy supplies and kitchens.

Another challenge is that Weatherhaven's business with resource firms tends to be cyclical, Mr. Castelli says, varying with commodity prices and local politics. Indeed, the security situation involving kidnappings and narcotics in countries such as Peru and Chile has been a problem for mining and pipeline companies.

He says the government and military are addressing the issue by erecting their own mobile camps to secure those regions and to secure the borders from narcotics traffickers. They are using Weatherhaven products and have worked with Canadian officials on security solutions, says Mr. Castelli, noting that there are more opportunities for companies that have years of experience developing products for securing Canada's borders and patrolling rugged, difficult terrain.

Among its new opportunities, Weatherhaven has created a facility in Lima's dockyards to turn shipping containers into temporary homes, command centres and hospitals. It has also built and installed an Antarctic base for Brazil and is talking with other countries about installing camps in Antarctica. Three-quarters of the 20 countries with scientific installations in Antarctica use Weatherhaven products, he adds, which the company developed for working in Canada's Arctic.

exclusive
Vale may sell potash assets in Saskatchewan
May 27, 2015 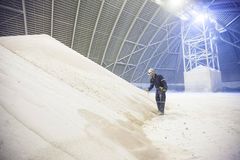