More than 200 chanting protesters gathered in a Madrid neighbourhood on Wednesday, preventing the eviction of an unemployed woman and her two children, one of whom is disabled.

The demonstration was part of a new wave of protests sweeping Spain, in which groups gather at unemployed people's homes to block their eviction, raising pressure on politicians to help a million Spaniards struggling to pay their mortgages.

The movement gathered steam in May as part of the "indignados" (indignant) protests against the government's spending cuts, failure to revive the moribund economy, and the European Union's highest unemployment rate of 21 per cent.

"With the housing bubble burst and unemployment rising, people have had to make a choice – either they feed their children or they pay the mortgage," said protester David Cobo, a member of a mortgage victims' group called Affected by the Mortgage, shouting above the noise of the crowd.

There are several such protests around Spain every week, organized through social media. In dozens of cases, crowds have successfully blocked entry to the building, making it impossible for an official to deliver a court order for eviction.

Of about 300,000 people kicked out of their homes in the past two years, most are among Spain's nearly five million unemployed. Unemployment benefits stop after about two years, leaving many with little or no income.

Last week the government announced measures to help those struggling with high mortgage payments, but consumer advocates said the moves would help only a handful of those pushed to their financial limits.

The ruling Socialists are likely to be defeated in elections due by March, 2012, and officials have begun criticizing the banks, the major mortgage lenders. Consumer groups dismiss their attacks as mere rhetoric.

Opinion polls show most Spaniards, on both left and right, feel the political class has failed to provide real solutions to the economic crisis.

The government's borrowing costs have soared as international investors worry that Spain could head into a fiscal crisis and need a bailout, like Ireland, Greece and Portugal. The government has responded by cost cutting that has angered Spaniards and hampered economic growth.

The value of mortgage debt roughly doubled in the five years to 2009, according to Bank of Spain data, as Spaniards were enticed onto the housing bandwagon by easy loan conditions.

"Everyone speculated in some way, giving the impression that prices were going to keep on rising for ever," said Fernando Encinar, analyst at real estate firm Idealista.com.

Property prices have fallen 16 per cent in Madrid since the peak of the boom in 2007, and the drop makes it impossible for many to sell their homes without remaining saddled with debt.

Under Spanish law, if a bank forecloses on a home and evicts the borrower, the former homeowner still owes the balance of the mortgage to the bank.

That has kept the property market from an even sharper fall, as borrowers try to hang on to their homes no matter what. As a result, the Spanish banking sector has stayed afloat, though badly in need of capital.

The overall national level of bad mortgage debt is very low at 2.6 per cent of total mortgages, as Spaniards struggle to keep up repayments by renegotiating terms or digging into savings.

"The main problem is not that Spain's [mortgage]law differs so dramatically from other countries. The issue is that Spain has been so much more exposed to the property bubble, and that prices have started to come down while unemployment has gone up massively," said Idealista's Encinar.

Conventional wisdom in Spain has always been that renting was throwing money away. Spanish home ownership is high compared with other countries at 85 per cent, according to property firms.

That makes it difficult for any government, of left or right, to draw up a policy which takes the steam out of property prices.

Banking customers' association ADICAE estimates that more than one million families face severe mortgage payment problems, and says many Spaniards are eating in soup kitchens so they can keep up their mortgage payments.

Anti-eviction groups have managed to stop banks and lawyers from repossessing property in dozens of cases, though banks often serve a new notice of eviction some months down the line. So far there has been no violence and police involvement has been limited.

"I'm here because I'm sick of the same people always being at risk while the banks always seem to get away with it," said Javier Gallego, a 41-year-old sound technician who took part in Wednesday's protest in Madrid.

Official data released on Wednesday showed the property hangover could continue for years to come, with about 700,000 properties still empty across Spain at the end of 2010, three years after the boom ended.

The case for an early Spanish bailout
January 19, 2011 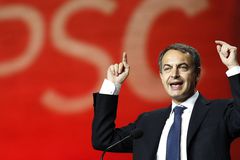 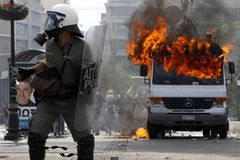 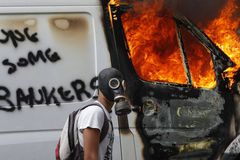