When Peter Sims discovered that Uber was monitoring and displaying his trips without his permission, he expected the company to apologize. Instead, Uber's chairman unfriended him on Facebook.

The entrepreneur and former venture capitalist had been friends with some of Uber's earliest founders and employees, and a fan of the ride-sharing service, for years. But one day in 2011 he found out that, as he was taking an Uber ride in New York, his real-time location was being shown on a big screen at an Uber launch party in Chicago. He complained, but was largely ignored.

Little did Mr. Sims know that, three years later, the outcry against what is perhaps Silicon Valley's most lucrative new giant would grow so loud that Uber could no longer ignore it – casting the ride-sharing service as the central figure in a discussion about just how aggressive a so-called disruptive company can be before users and governments start to fight back.

Uber's expansion has been, by almost any metric, astounding. A year ago, Uber was operating in 60 cities in 21 countries. Today, customers can use the service in 250 cities in 50 countries. In recent months, the company has brought its service, on average, to a new city every two days.

In some cases, Uber has pushed its service in to new cities despite specific instructions from local bureaucracy not to do so. Earlier this month, the company ignored local regulations in Portland, Ore., and began offering ride-sharing. The local government responded by launching a lawsuit.

Similar stories abound worldwide. In Spain, the Madrid Taxi Association convinced a judge to issue a temporary ban against Uber. In the Netherlands, a court banned an early-stage Uber ride-sharing service and, in Delhi, local authorities halted the company after an Uber driver allegedly raped a passenger. Two California district attorneys – including the one responsible for the area where the company is headquartered – are suing Uber, claiming it misled customers about the methods it uses to screen its drivers.

"Uber's approach is what I like to call the Punch strategy," says Thilo Koslowski, vice-president distinguished analyst at research firm Gartner's automotive unit. "They go into a market, they punch and they take a couple of punches back."

Part of the reason behind Uber's breakneck pace of expansion is financial necessity. Earlier this year, the company raised a whopping $1.2-billion (U.S.) of new funding, an investment round that values Uber in the tens of billions of dollars. Even by Silicon Valley standards, such numbers are massive. But they also come with equally massive expectations.

"Those [venture capitalists] obviously need a return on that money," says Jon Down, director of the Center for Entrepreneurship at the University of Portland. "They're expecting the company to go to market with a value of $100-billion or more in the next year or two."

But the money also renders the traditional tools of municipal punishment – fines and citations – largely impotent. In effect, the startup has more cash than its opposition has punishment.

It also has fans. In virtually every city where it has faced municipal resistance, Uber has been able to marshal thousands of customers to sign petitions, send angry e-mails to local politicians and generally agitate on behalf of the company. Uber is able to do this in part because many consumers love the ride-sharing service, but also because many consumers truly despise the traditional taxi industry.

"This is the status quo pushing back against the disruptor, and Uber needs to play by the rules," Mr. Koslowski says. "But at the end of the day, Uber is benefiting from something very powerful, and that's consumer demand."

But Uber's decision to simply ignore regulations it doesn't like also speaks to the core ethos of the company and its founders. Convinced that the existing rules are plainly designed to enrich the incumbents, the startup believes it is actually doing a social good by flaunting the law.

"Systems like this deserve to be disrupted," says Andrew Macdonald, a Canadian who heads up Uber's largest region, which includes much of the central United States and all of Canada.

"Of course [ride-sharing] needs to be regulated. But ride-sharing is new, and often the loudest voices [in opposition to Uber] are folks that benefit from the system."

But just as Uber's hyper-aggressive version of let-the-market-decide ideology has helped the company become one of the fastest-growing names in the technology industry, it has also made it the subject of much loathing. In recent months, a wave of backlash has forced the company into all-out damage-control mode. The catalysts are numerous and varied – ranging from a number of alleged sexual assaults by Uber drivers to the way the company uses private user data to an incident in which a senior Uber executive mused that he would like to finance a team of researchers to dig up dirt on journalists who have been critical of Uber.

"That's the pattern with Uber's 'leadership' team: they like to fight … yet show no empathy or much in the way of ethics," says Mr. Sims, the entrepreneur who turned from Uber fan to critic. "In fact, they haven't shown me that they genuinely care about any person, customer or institution except themselves."

Cognizant of the backlash, Uber's executive team has taken pains in recent weeks to try and present a friendlier public face – even as the company's growth plans remain unchanged.

"We need to be more humble as a company, there's no doubt about that," Mr. Macdonald says. "There's a difference between being aggressive and fighting for our principles – which you're going to see us continue to do – and recognizing that we're not flawless."

Uber has also sought to present its service as the catalyst for social good, arguing that it creates millions of jobs, helps keep cars off the road and even lowers the drunk-driving rate.

But as Uber tries to cast a positive light on its ride-sharing service, there's a good chance that ride-sharing may one day become a minor part of the company's corporate model. Indeed, Uber's expansion plans aren't just geographically ambitious – they are all-encompassing.

Consider a very early-stage service from the company called UberPool, currently available in just a handful of cities. The service essentially lets users split the cost of a ride with other users heading in the same direction. It's a simple premise, but is reliant on some very sophisticated trip-planning algorithms, and requires a massive amount of data to work – data that Uber has amassed over the years.

In its very short corporate life, Uber has become one of the world's leading repositories of a hugely important piece of information – the best way to get from Point A to Point B. It is largely that wealth of data that, in the minds of the company's investors, makes Uber a potential $100-billion company. And a ride-sharing service is only the beginning of what Uber can do with that information.

Already, the company is testing a service that delivers groceries in Los Angeles, another that delivers toiletries and other convenience-store items in New York. It is working on courier services. It is, in other words, transforming from a ride-sharing company to a worldwide transportation logistics giant.

"If the globe is one big grid and we can move people cheaply and efficiently around that grid, we're going to be able to move other things," Mr. Macdonald says.

"We're on the precipice." 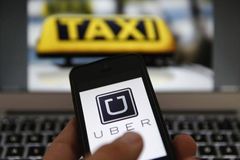