Donald Trump, now President, loved bashing the auto makers during the election campaign and his tirades worked a charm among the voters in the rust-belt states and the regions that have been swamped by Chinese and Mexican imports. "U.S. jobs fled the country and headed to China and Mexico," he would thunder.

His vow to slap a 35 per cent border tariff on cars built in Mexico and exported to the United States rattled General Motors, Fiat Chrysler Automobiles and Ford, the first two of which would not have made it through the 2008-2009 crisis without huge bailouts. We can guess what Mr. Trump was thinking: Damned nervy of you guys to take taxpayer-funded rescues only to move jobs outside the United States.

By comparison, Mr. Trump treated Apple, which builds almost none of its hardware on U.S. soil, rather gently. Why? If there were ever a company that owed its phenomenal success to the U.S. taxpayer, it is Apple, whose $630-billion (U.S.) value makes it the most world's most valuable stock-market player.

Read more: Greatest jobs producer ever? Trump has some work to do

To be sure, Mr. Trump (an Android fan) did take a few swipes at Apple during his campaign. He urged the company to make more gadgets in United States and called for a boycott against Apple for having rejected an FBI order to unlock an iPhone that had belonged to one of the San Bernardino shooters.

That's it, and the boycott invitation was ignored. There was no threat of tariffs similar to the ones he vowed to impose on car imports, which triggered Ford's January decision to scrap a Mexican small-car factory. All Mr. Trump got was a vague commitment from Foxconn of Taiwan, Apple's main contract electronics manufacturer, to consider making investments in the United States.

Still, you would think Apple would have a moral obligation to create more jobs and value-added production in the United States. Like all U.S. stock market companies, Apple is beholden to its shareholders first and all other stakeholders second. But it was the taxpayers, not the shareholders, who provided most of the funding for many of the key inventions that are built into every Apple device.

Apple is better at design, packaging and marketing than coming up with breakthrough innovations. Without taxpayers' largesse, delivered through government programs, Apple might be nowhere.

What powers the iPhone, the iPad and the iPod? Lithium-ion batteries, which were developed by the U.S. Department of Energy, not Apple. How about the liquid-crystal displays? They came from the National Institutes of Health, the National Science Foundation and the Department of Defense. Apple devices are connected to the Internet, which is not an Apple invention.

Nor is the micro hard drive, the microprocessor, GPS, Siri (Apple's voice assistant) or DRAM cache, which emerged from the U.S. Defense Advanced Research Projects Agency and other government bodies (the government's role in making Apple products a success was reported in detail in 2013 by a team led by Canadian economist William Lazonick of the University of Massachusetts Center for Industrial Competitiveness).

At the same time that Apple taps into the government's research machine, it benefits from R&D tax breaks and sucks up the most talented graduates from government-subsidized universities. Is Apple thankful? No doubt it is, but not to the point that it declines to exploit handy government tax loopholes. The biggest loophole dates back to 1960 and allows companies to avoid the 35 per cent federal tax rate on profits until those profits are repatriated. At last count, Apple had $216-billion in overseas accounts. (Apple will benefit again if Mr. Trump drops the repatriation rates).

It's unimaginable that Apple, in a random act of gratitude to the U.S. taxpayer, would ever pay a big, fat thank-you dividend to the government. Instead, it's fond of spending its fortunes on share buybacks, all the better to please the shareholders. Last spring, Apple announced it was boosting its share buybacks, the key component of the massive capital return program announced in 2012, to $175-billion from $140-billion.

Apple is a wildly successful company, one whose product launches have become national obsessions. Shrinking a laptop computer to the size of a hand phone was a stroke of genius (one that wrecked BlackBerry). Thanks to Apple, hundreds of millions of consumers have a sleek communications and entertainment device that works almost flawlessly. And while Apple has almost no manufacturing jobs in the United States, it does have about 76,000 employees there, according to its website.

But the role of the taxpayer in ensuring Apple's tech and consumer success cannot be ignored. If the new President argues the car companies have an obligation to bring jobs back home, Apple has a double obligation to do so. What's unfair is that he is badgering the auto bosses to create jobs in the United States more than the boss of Apple. 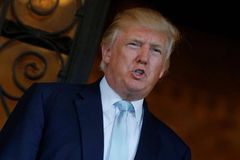