It risks becoming a very expensive bridge to nowhere.

At issue is the long-planned, and even longer-discussed, new bridge linking Windsor and Detroit – one of the busiest border crossings in the world. The whole project is slated to cost $3.4-billion.

But all of it – the span, a Canadian customs plaza and highway links on both sides of the border – could become the largest white elephant in Canadian history.

The problem? The Obama administration is balking at paying the $250-million needed to build its own customs plaza on U.S. soil.

And without a U.S. government presence, the entire project would be a dead end – an elaborate boat ramp and fishing pier on the Detroit River. The $1.6-billion Herb Gray Parkway, linking Highway 401 to the new bridge, would be lonely monument to the long-time federal Liberal cabinet minister, who died recently at age 82.

Never in the long history of the Canada-U.S. border has one country not built their own border station.

But this is no ordinary bridge project. So anxious to get the vital artery built, Canada has already agreed to front or guarantee virtually all the cost, including a highway on the U.S. side.

And now the Americans apparently want Canada to pay for the U.S. customs plaza, discreetly suggesting Ottawa could pay itself back from future tolls on cars and trucks crossing the bridge. It's a little like your neighbour expecting you to pay for his new driveway, front door, doorbell and burglar alarm.

U.S. officials insists they never agreed to pay for the plaza. Ottawa may have assumed they would, but it's not in writing.

"I am not aware of any promises to fund that," new U.S. ambassador Bruce Heyman said in his first interview after taking up his post last month. "At the same time, I would like to have the opportunity to sit down with the Canadian government and understand their perspective."

Mr. Heyman is technically correct. The U.S. government is not a party to the bridge agreement between the Canadian and Michigan governments.

But politics, rather than legal niceties, may be the real reason for the plaza controversy. The money has become caught up in partisan budget wrangling in Washington and nasty U.S. midterm elections, coming up in November.

A Democratic-held U.S. Senate seat is up for grabs in Michigan, with the retirement of Carl Levin. Republican Governor Rick Snyder is also up for re-election. And he has angered some traditional Obama allies, including the United Auto Workers, for passing anti-union right-to-work legislation in the state.

Like the long-delayed U.S. decision on the Keystone XL oil pipeline, even the lure of thousands of construction jobs hasn't been enough to break the bridge impasse. The project would create as many as 13,000 full-time jobs in both countries for three to four years.

In what has become a common theme in many other cross-border disputes, Ottawa has predictably struggled to gets its economic arguments heard over the din of domestic U.S. politics.

The other awkward reality is that Canada needs this bridge more than the United States. The Detroit-Windsor crossing is part of a vital lifeline linking Ontario manufacturers to their U.S. customers and supply chains. Congestion-free access to the border is more important than ever, given the disturbing loss of export market share in the United States over the past decade.

The bridge is to Ontario's manufacturers what Keystone is to Alberta's oil patch.

There is some urgency to getting this issue resolved. The plan is to put the project out to tender as a public-private partnership by early 2015. If the $250-million for the plaza is to be paid out of future tolls, investors would have to wait longer to get their money back. It also increases the risk to Canadian tax payers, who are already shouldering the most of the burden and won't be fully reimbursed for some 50 years. Construction could begin late next year or 2016, with completion in 2020.

The options facing Ottawa aren't very enticing. It can pony up more of its own money for a U.S. customs plaza. Or, it can delay the bidding process in the hopes that the U.S. government commits the cash in next year's budget.

Either way, this bridge could get a lot more expensive. 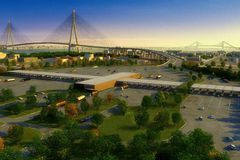