Two Federal Reserve officials argued the case for another interest-rate increase in interviews on the eve of an eagerly awaited speech by chair Janet Yellen in Jackson Hole, Wyo., that will be scoured for hints of a move that could come as soon as September.

Their remarks reflect one camp at the Fed in favour of moving soon that's debating with another group of policy makers who see no reason to rush. Investors are waiting to hear from the chair to figure out where she stands. Ms. Yellen speaks at 8 a.m. local time Friday at the Kansas City Fed's annual mountain retreat in Wyoming, which is 10 a.m. Eastern Time.

The formal topic of her remarks – "The Federal Reserve's Monetary Policy Toolkit" – implies a technical focus on the challenges facing the central bank in an era of tepid growth and low inflation. Investors will scrutinize any description of the economy in the chair's first public comments since June that will clarify if the Fed remains on track to raise rates later this year. Its next meeting is Sept. 20-21.

The two regional presidents' comments come after several other top Fed officials have signalled that a rate hike could be on the table in coming months. These include New York Fed chief William Dudley and John Williams of the San Francisco Fed, while vice chair Stanley Fischer said Sunday the central bank was "close to our targets."

In addition, minutes of Fed discount rate minutes released this week showed the boards of directors at eight of the 12 regional Fed banks last month sought a quarter-point increase in the rate on direct loans from the U.S. central bank to 1.25 per cent. It was the first time since policy makers raised the benchmark federal funds rate in December that a majority of the Fed's regional boards backed a discount-rate increase.

Investors view the probability of a September hike at roughly 30 per cent, according to pricing in fed funds futures markets, versus 20 per cent this time last week. Strong U.S. hiring in June and July has eased concerns that a weak spot in May was a harbinger of a downturn in the labour market, while recent comments from Fed officials have been upbeat.

"I thought it was time to continue the process of normalization of interest rates" in July, Ms. George, one of the most hawkish Fed officials, said Thursday. "When I look at where we are with the job market, when I look at inflation and our forecast for that, I think it's time to move."

Ms. George dissented in favour of a hike in July at the Federal Open Market Committee meeting, when officials left the target range for the benchmark fed funds rate unchanged at 0.25 per cent to 0.5 per cent. While she currently favours higher rates, she said her view could be shifted by economic data in advance of next month's policy gathering.

"Where it will look at the September meeting, we will have to wait and see if anything changes," Ms. George said. "I don't think that we are going to need to have high interest rates. I don't think we need to cool off the economy by any means," she said. "But I do think that it would be appropriate to begin the process of continuing that normalization."

August's U.S. employment report is scheduled for release released Sept. 2. A Bloomberg survey of economists forecast that employers added 175,000 jobs last month compared with 255,000 in July, and the unemployment rate nudged down to 4.8 per cent.

Mr. Kaplan said that "in the not-too-distant future, if the facts continue to confirm" that the Fed is headed in the direction of its employment and inflation goals, "we're moving toward being able to take another step."

Though progress toward the Fed's 2 per cent target for price pressures has been "frustratingly slow," said Mr. Kaplan, who isn't a voter on the FOMC this year. 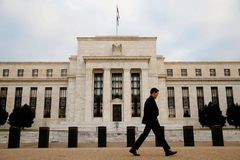