Like many others on Wall Street, Anthony Scaramucci, founder of SkyBridge Capital, a hedge-fund firm in New York, is flummoxed by the presidential election campaign. First he backed Scott Walker, the Republican governor of Wisconsin, who quit the race in September. Then he swung behind Jeb Bush, the ex-governor of Florida, who dropped out of the race last month.

"I have been consistently wrong," Mr. Scaramucci said. Now he's trying to motivate himself to fall in line behind his party's likely nominee, businessman Donald Trump. And he's hoping for an end to the strident criticism of the financial industry in the campaign – criticism he describes as "nonsense" that candidates "have decided is a way to score points with the electorate."

For Wall Street, the presidential campaign is looking like a very bad investment. Not only are candidates attacking big banks with gusto, but in this topsy-turvy primary season, the financial industry can't seem to pick a winner. Financiers have already poured tens of millions of dollars into the campaign, with much of it going to candidates like Mr. Bush, whose early promise disintegrated, or Florida Senator Marco Rubio, whose bid has failed to gain traction.

The Democratic front-runner, Hillary Clinton, has also benefited from Wall Street largesse, although to a lesser extent. The industry has contributed nearly $19-million (U.S.) to her campaign and to outside groups supporting it, the highest total of any sector, according to the Center for Responsive Politics. (By contrast, Mr. Bush's doomed attempt garnered a whopping $36-million from the industry.)

While Wall Street leans Republican, the preference isn't always a pronounced one. Many financiers are pro-business but socially liberal – and just as likely to support Democrats as Republicans. Both parties draw support from the sector and are keen to have deep-pocketed financiers on their side.

Back in 2008, there was a short-lived love affair between the financial industry and then-candidate Barack Obama. By 2012, the industry was deeply disillusioned. Wall Street's contributions tilted heavily to Mitt Romney, Mr. Obama's Republican challenger. Not only did Mr. Romney have a long career in the private-equity industry, but he promised to repeal the financial reform legislation enacted by Mr. Obama in 2010.

Early in this campaign, Mr. Bush emerged as Wall Street's favoured candidate. "You kind of knew what you were getting with Jeb," said Mark Calabria, an expert on financial regulation at the Cato Institute in Washington. Mr. Bush benefited from a sense of familiarity, built up over repeated fundraisers and meetings with financial-industry types, Mr. Calabria said. "But the biggest thing was they thought he would win."

That turned out to be a major miscalculation and a lesson in the limits of what money can achieve in political campaigns: Despite having a war chest that dwarfed those of his rivals, Mr. Bush failed to win a single primary contest.

In terms of predictability for Wall Street, Ms. Clinton is more appealing than her likely challenger, Mr. Trump, Mr. Calabria noted. With Ms. Clinton, "it's not fully what you want, but you also know how bad it is," he said. With Mr. Trump, "you might come out better, but you just don't know."

Home to moderate, mainstream Republicans as well as Democrats, Wall Street isn't a place where Mr. Trump has many fans. His only public endorsement from the industry came from Carl Icahn, a legendary if iconoclastic corporate raider, who declared in September that Mr. Trump represented what America needed – "somebody to wake it up."

Meanwhile, Stanley Druckenmiller, a billionaire former hedge-fund manager, recently likened Mr. Trump's grasp of economics to that of a kindergartener. "He doesn't know what he's talking about," Mr. Druckenmiller, who is supporting Ohio Governor John Kasich, said on CNBC. "What comes out of his mouth astonishes me."

One long-time hedge-fund manager in New York said he hasn't spoken to anyone in the financial community who is enthusiastic about Mr. Trump. "A lot of people are bogged down in, 'What are we going to do? We're registered Republicans, are we going to support the Republican nominee or not?'"

The manager hosted a fundraiser for Mr. Rubio and said he's troubled by the rhetoric surrounding Wall Street in the campaign. "It's very easy and popular to vilify Wall Street," he said. "It's also completely inappropriate and damaging."

Democratic candidate Bernie Sanders, a Vermont senator, is the most vociferous critic, repeatedly telling crowds that "the business model of Wall Street is fraud." Ms. Clinton has also talked tough: "When I tell you no bank can be too big to fail and no executive too powerful to jail, you can count on it," she said in February.

Republican candidates, too, have taken shots at the industry. Mr. Rubio has said that banks are "bragging" about being too big to fail, while Mr. Kasich said Wall Street needs "a good ethics lesson." Mr. Trump, for his part, has remarked that hedge funds are "getting away with murder."

While the rhetoric is perhaps overly broad and sweeps up everyone in the industry, it's mostly deserved, remarked Wade Black of Scarsdale Equities, a boutique brokerage firm.

Mr. Black is a minority in the industry: He's supporting Mr. Sanders. Some of Mr. Sanders's proposals would be good for his business, he said, such as breaking up big banks – which could open up opportunities for smaller firms like his. Plus, after a string of strong performances, Mr. Sanders is no longer dismissed as a wacky socialist. "People have gotten over the semantics," Mr. Black said. "He's a very acceptable alternative." 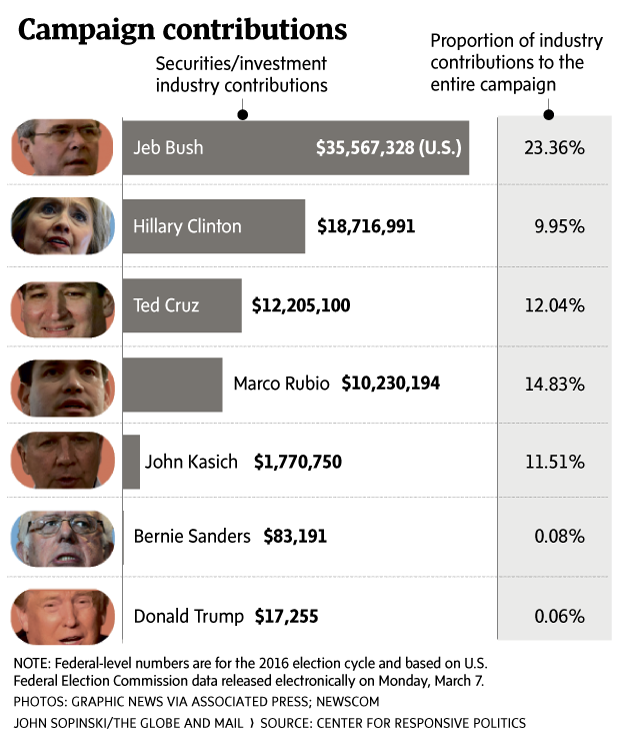 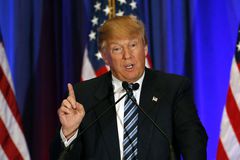 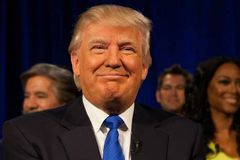