Top White House economic adviser Gary Cohn, who has been leading the Trump administration's effort to overhaul the U.S. tax code, will remain in his position as director of the National Economic Council, a White House official said.

Cohn, who was said to be particularly upset over President Donald Trump's remarks on the violence in Charlottesville, Virginia, has no plans to resign, the official said, speaking on condition of anonymity.

Financial markets swooned as concern spread that Cohn might leave. The S&P 500 Index tumbled to the lowest level this week, while Treasuries erased earlier losses.

Market analysts consider Cohn's continued presence a positive sign, though they are wrestling with whether the fallout from Trump's polarizing remarks on race-related issues will damage his administration's tax-cutting, deregulation and pro-growth agenda.

Cohn, who is Jewish, stood beside the president at the freewheeling press conference Tuesday in which Trump appeared to draw an equivalency between neo-Nazi demonstrators and counterprotesters in the weekend violence in Virginia. Cohn was at the event because it had been scheduled to address infrastructure policy.

Rumors had been circulating since then that the former Goldman Sachs Group Inc. executive was considering leaving the White House. Officials haven't been able to say whether Trump and Cohn have spoken since Tuesday.

Trump has previously said that Cohn is one of the top contenders for Federal Reserve chair when Janet Yellen's term ends in 2018.

Cohn's fellow Goldman Sachs alum, Dina Powell, was also deeply upset by the president's comments, according to a person familiar with her thinking. Still, she also plans to stay on in her assignment as deputy national security adviser, the person said.

Trump waded back into the racial controversy Thursday morning with a series of tweets criticizing those who would remove statues of Confederacy heroes. The violence in Virginia began with a rally organized by neo-Nazis, Ku Klux Klan members and other white supremacists opposed to the removal of a Confederacy statue there. One counterprotester was killed and at least 19 others were injured when an Ohio man rammed them with a vehicle.

The KBW Bank Index had dropped more than 1 percent in afternoon trading on concern prospects for cutting taxes and regulations would dim if Cohn left. Banks pared losses after a White House official said Cohn plans to stay on, though they fell to session lows in the afternoon along with the broader stock market. JPMorgan Chase & Co., the biggest U.S. bank by assets, was down 1 percent at 1:30 p.m. in New York. Goldman tumbled as much as 1.7 percent to the lowest intraday level since July 28.

The dollar weakened as much as 0.5 percent versus the yen, after trading little changed before the speculation began. U.S. stocks and Treasury yields extended declines in the afternoon in New York, after a van plowed into pedestrians on one of Barcelona's busiest streets, causing multiple deaths and injuries in an attack authorities are treating as terrorism.

Cohn's departure would remove the "safety net" that markets see and would increase the chances that more populist officials gain greater power. That could reignite issues such as an increase in bank capital requirements and size limits on financial institutions.

"The question for the market is whether business pragmatists will either abandon or refuse to work for this White House," Seiberg said in a note to clients. The firm's thesis since Cohn joined Trump's team has been that the market would look past the president's "tweeting and theatrics" as long as investors had confidence that pragmatists were influencing government policy.

Disbanding Trump's business councils doesn't affect the likelihood that tax legislation will be enacted, Evercore ISI's Terry Haines wrote in a note, assessing the odds at 50 percent. As long as Cohn and Treasury Secretary Steven Mnuchin remain with Trump, the administration will continue to be a competent congressional partner on tax legislation, Haines said.

Compass Point Research & Trading LLC analyst Isaac Boltansky warned in a note that a Cohn departure would spark "a material market sell-off, as he is running point on tax reform and considered as a front-runner" to replace Yellen. "His departure would surely dampen Wall Street's already dwindling confidence in Washington's capacity to govern."

"Cohn is an area of focus for many investors because he represents a known quantity in a volatile landscape," Boltansky wrote in a separate email. "Wall Street knows him because they invested in Goldman at some point and major players in corporate America know him because they banked with Goldman." 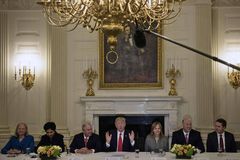 Trump axes business panels as key CEOs decry response to Charlottesville
August 16, 2017
Report an error
Due to technical reasons, we have temporarily removed commenting from our articles. We hope to have this fixed soon. Thank you for your patience. If you are looking to give feedback on our new site, please send it along to feedback@globeandmail.com. If you want to write a letter to the editor, please forward to letters@globeandmail.com.
Comments