Employment at the General Motors of Canada Ltd. assembly plants in Oshawa, Ont., will drop by 1,000 people to 2,600 in November when production of the Chevrolet Camaro shifts to Michigan.

More than two years after announcing that Camaro production would move from Oshawa to Michigan, GM Canada said the last Canadian-built version of the car will roll off the assembly line on Nov. 20.

The announcement about job cuts in Oshawa came hours after parent company General Motors Co. said it will invest $5.4-billion (U.S.) during the next three years in its U.S. plants.

None of that money is intended for Oshawa, whose future still depends on the outcome of negotiations next year between GM and Unifor, which represents workers in Oshawa and in St. Catharines, Ont., where GM makes engines and transmissions.

"GM Canada continues to examine a range of longer-term opportunities and competitiveness enhancements for Oshawa Assembly working with Unifor, government, supplier and community partners to ensure our operations are as innovative, cost efficient and cost competitive as they can be," GM Canada said in a statement.

The immediate impact of the Camaro move is the loss of one shift in Oshawa, where 3,600 workers now toil on four shifts making six vehicles.

When the Camaro goes, Oshawa will be down to 2,600 workers over three shifts making five vehicles.

"We knew it was coming but it doesn't make it any easier when it gets here," Unifor president Jerry Dias said. "The timing of it – with the $5.4-billion in the U.S. – the timing could have been better for sure."

About 60 per cent of the workers in Oshawa are nearing retirement, GM Canada president Stephen Carlisle said in a statement, which means there could be no layoffs.

Under the contract with Unifor, GM Canada offers a $50,000 (Canadian) retirement incentive to production workers and a $60,000 payout to skilled trades workers. They are also eligible for a $20,000 voucher to buy a new GM vehicle.

It's almost certain, Mr. Dias said, that 1,000 workers will opt for early retirement, which would mean no layoffs.

But the bigger issue is whether there will be replacement products for the remaining GM vehicles later this decade or whether the Camaro is the beginning of the end of auto production in Oshawa, where GM cranked out 940,000 vehicles in its peak year of 2003. Production fell to 272,000 last year.

A plant that assembled full-sized pickup trucks closed in 2009 and one of the two remaining car plants is scheduled to shut down next year.

Mr. Dias said he's pleased about an announcement GM Canada made earlier this week to add 100 engineers to its research and development centre in Oshawa.

"But we're not going to rest until we have a solution for Oshawa and St. Catharines," he said.

The new jobs at the engineering centre and an investment of several hundred million dollars at GM's Cami plant in Ingersoll, Ont., are positive signs, Mr. Duguid said, "but we still have a ways to go to get the commitment we're looking for and that's a future mandate for this plant beyond 2016."

The shift of Camaro production out of Oshawa marks the second time Canada has lost the car.

GM discontinued that muscle car and its cousin the Pontiac Firebird in 2001 and closed the plant in Ste-Thérèse, Que., northwest of Montreal, where they were assembled. 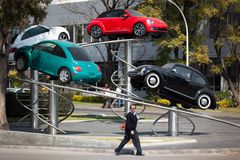 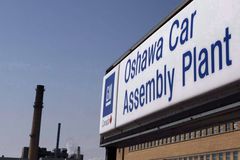