A fragile consensus is emerging in U.S. towns and cities – and even some key businesses – signalling that the enormity of the Newtown massacre may have shifted the country's attitude towards gun control.

A number of pro-gun Democrats and even some Republicans are now expressing tentative support for such a move.

As the backlash against gun-related violence mounted, the owner of the country's largest gun company said it would put the firearm manufacturer, the maker of the Bushmaster rifle used in the killings, up for sale, calling the massacre at Sandy Hook Elementary School "a watershed event."

A leading outdoor outfitter, Dick's Sporting Goods, suspended some gun sales, while the country's biggest retailer, Wal-Mart Stores Inc., removed information from its website about a type of gun used in the Newtown shooting.

Prices of major gun makers, including Smith & Wesson Holdings Corp, continued to fall, and have declined as much as 18 per cent since the shootings.

The moves by politicians and businesses suggest that the U.S. mood around gun ownership, a flashpoint in American politics that goes back to the founding of the country, has crystallized around the tragic figures of the 20 dead children and the town in mourning. Unlike in the aftermath of other killings using high-powered rifles, most recently in Aurora Colorado and Virginia Tech, the reaction to Sandy Hook could put enough pressure on the White House and Congress to effect change in gun-control legislation.

The White House also said Tuesday that it would also support legislation to close the "gun show loophole," which allows people to buy guns from private dealers without background checks.

The President is not expected to take any formal action on guns before the end of the year.

Another sign of the changing landscape came from the business world. On Tuesday, private-equity firm Cerberus Capital Management LP said it would sell Freedom Group, four days after one of the gun maker's rifles was used in the killings in which 27 people were murdered.

The move by Cerberus to put Freedom Group on the block comes after stepped-up pressure from a public pension fund that has invested hundreds of millions of dollars with Cerberus. It suggests that certain investors – particularly large public pension funds and non-profit endowments – intend to use their financial heft to express their outrage over Friday's massacre.

That dramatic announcement and the sinking stocks of gun makers form a stark contrast to what occurred after prior mass shootings in Wisconsin, Colorado and Arizona over the past two years. In those instances, shares of gun companies dipped slightly or even edged higher in an equivalent period of time. And Cerberus remained silent on its ownership of Freedom Group.

No longer. On Monday, the California State Teachers' Retirement System, the second-largest public pension fund in the U.S., said it was reviewing its investment with Cerberus. The state's treasurer also said he would seek to limit holdings of gun companies by public pension funds.

Based in New York, Cerberus is a titan of the private-equity world, perhaps best known for its ill-fated purchase of automaker Chrysler Corp. in 2007. Early Tuesday it issued an unusual statement explaining that it would unload its stake in Freedom Group, an agglomeration of gun companies it began assembling in 2006.

The Sandy Hook tragedy "has raised the national debate on gun control to an unprecedented level," the firm said. "We are investors, not statesmen or policy makers. Our role is to make investments on behalf of our clients who are comprised of the pension plans of firemen, teachers, policemen and other municipal workers and unions, endowments, and other institutions and individuals."

The decision to sell Freedom Group "allows us to meet our obligations to the investors whose interests we are entrusted to protect without being drawn into the national [gun control policy] debate," the statement said.

In a coincidental twist, the elderly father of billionaire Stephen Feinberg, the chief executive of Cerberus, happens to live in Newtown, about 10 kilometres from the site of the violence. The shooting was "devastating," Martin Feinberg said in a brief interview with Bloomberg News on Tuesday. "It's horrendous, truly horrendous." So far There is no indication that the elder Mr. Feinberg had any input into the decision made by his son's firm.

The tragedy in Newtown is also prompting other investors to double-check their portfolios. Laura Berry, executive director of the Interfaith Center on Corporate Responsibility, in New York, said she has been fielding a flurry of calls from her members – faith-based investment institutions or endowments that together manage roughly $150-billion (U.S.) – in recent days. They want to make sure, she said, that there's no possibility that they are investing in gun companies in an indirect way.

Moments like these should serve as a reminder to "investors large and small that we really have a voice," she said. "If we're going to participate in the capital markets, we can't close our eyes."

A new Washington in the wake of the Newtown massacre
December 18, 2012 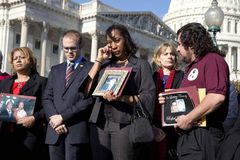 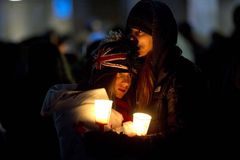 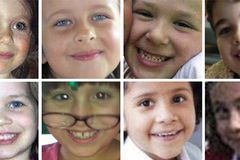 Legal hurdles get in the way of U.S. gun-control advocates
December 17, 2012 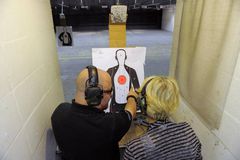