Netflix Inc. managed a global rollout of its service to 130 new countries last week without a single technical glitch, but it says it can't do much more than it already is about VPN users circumventing its geographic blocks and frustrating its localized competitors.

The hashtag #netflixeverywhere was coined to describe the push (everywhere does not so far include China or North Korea), but the ambitious global expansion also requires the company to acquire more and more content to fit those international tastes. The Los Gatos, Calif., company has 31 of its own original series for 2016, as much as 600 hours of new programming it can show anywhere around the globe.

The content it licenses from other sources – movie studios, cable and broadcast television providers – is often a different story. Territorial rights are "sliced and diced," according to Ted Sarandos, the company's chief content officer, in ways that tend to frustrate users.

According to Elizabeth Bradley, vice-president of content acquisition at Netflix, sometimes rights are presold before Netflix can ever bid: "We have a show like The Blacklist, we have it in most all of our territories, but the timing may be different, and the availability is different."

As Canadians can attest, that means a lot of interesting content is often unavailable outside the United States. In slightly rarer instances, it means other territories have different shows or movies that the Netflix U.S. catalogue lacks. It has created a ripe market for providers of software solutions to spoof a user's location, so viewers can check out those different catalogues, an exercise made vastly more complex by 190 potential territories.

"Our ambition is to do global licensing and global originals, so that over maybe the next five, 10, 20 years, it'll become more and more similar until it's not different," Netflix chief product officer Neil Hunt explained in an interview at the CES 2016 convention in Las Vegas. "We don't buy only for Canada; we're looking … for all territories; buying a singular territory is not very interesting any more."

In the meantime, Canadian media executives, particularly from Bell, have in the past called consumer use of VPNs "stealing," and allege that Netflix isn't doing enough to stop it. Briefing books released by the new federal Liberal government show the issue of copyright and VPNs has been put on the radar of Heritage Minister Mélanie Joly.

"We do apply industry standard technologies to limit the use of proxies," Mr. Hunt says. "Since the goal of the proxy guys is to hide the source it's not obvious how to make that work well. It's likely to always be a cat-and-mouse game. [We] continue to rely on blacklists of VPN exit points maintained by companies that make it their job. Once [VPN providers] are on the blacklist, it's trivial for them to move to a new IP address and evade."

The company does claim to have a salutary effect on more overt forms of piracy. At the Netflix keynote last week, Mr. Sarandos said that the use of BitTorrent – a popular source of copyright-evading movie and television downloads – went down 14 per cent in Australia after Netflix officially launched in the spring of 2015. Unofficially, reports suggest as many as 200,000 Australians had already been accessing Netflix via VPN; there are more than a million subscribers now. Canada is estimated to have about four million subscribers.

"When we have global rights, there's a significant reduction in piracy pressure on that content. If a major title goes out in the U.S. but not in Europe, it's definitely pirated in Europe, much more than it is if it's released simultaneously," Mr. Hunt says.

The company's expansion plans could put some market share muscle behind its desire for global rights, too. Mr. Hunt says Netflix has subscribers in 50 per cent of the broadband-connected homes in the United States today, about 40 million of its 70 million subscribers, and it is aiming to capture 60 million to 90 million subscribers in the United States. In the rest of the world, gaining a fraction of the 2.5 billion (mostly wireless) broadband consumers represents an enormous growth opportunity.

Netflix's push for global rights may put national streaming services that have no plans to compete internationally – such as Bell's CraveTV and Rogers/Shaw Shomi – at a disadvantage in the bidding. Another concern that Canadian content-makers have raised is that Netflix doesn't have to abide by Canadian content rules, so the service may not reflect local culture much.

"Content that succeeds tends to succeed anywhere," Ms. Bradley says. "We did a four-picture deal with Adam Sandler because we could see in the data every time you had an Adam Sandler picture, even if the critics don't love it, it turns out fans really do. Consistently and globally."

Mr. Sandler's first Netflix original, The Ridiculous 6, was just announced as the most-watched movie in its first 30 days in the history of Netflix. And yes, critics did hate it. "Great news: They don't seem to be doing all the watching," says Ms. Bradley. 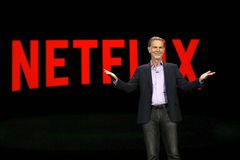 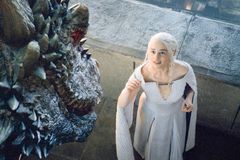