Emboldened by the success of its digital paywall that has seen some 455,000 users pay for online news, The New York Times is tightening access to its website in a move that paves the way for more aggressive pay models at publications across North America.

For the past year, the publisher allowed access to 20 free stories a month from any single computer. It has lowered that number to 10 to encourage more people to pay for the news – although it said readers who were directed to a story via social media or a search engine would have unrestricted access to it.

The newspaper group's efforts to have readers pay for online content have been closely watched by publishers around the world since it launched its paywall last year. As it officially announced subscriber numbers for the first time Tuesday, publishers began scrubbing the release for insight into how to enhance their own fledgling paywalls.

The Times' metered system is rapidly becoming the preferred method of newspaper publishers charging for online content, and is being adopted by a number of Canadian outlets.

Following experiments in Montreal and Victoria, Postmedia Network Canada Corp. will restrict access to several of its metropolitan daily newspapers in the spring. The Globe and Mail is expected to launch a metered version of the business content on its website in the second half of the year, and Torstar Corp. continues to test a metered model at its Hamilton Spectator.

Magazine publishers are also considering how to charge for their content online, with Rogers Media Inc. considering enhanced paid-access models for its consumer magazines such as Maclean's and Chatelaine.

"We are really all in this together as an industry as we try to figure out what works," said Wayne Parrish, chief operating officer at Postmedia. "I don't think anyone has an idea of what will work in two, three or five years."

Some analysts took the Times' move as an encouraging signal.

"Today's positive announcement is the first good news from the company in some time," said Douglas Arthur, a media analyst at Evercore Partners. "[It]also announced a new restrictive access policy ... this would seem to underscore the company's confidence in the pay wall model."

The confidence has been infectious, largely because the Times is expected to reap an $85-million haul from its online subscribers in 2012. Gannett Co. Inc. , the largest publisher in the United States, recently announced plans to restrict content at 80 of its newspapers (excluding its flagship USA Today).

Other organizations such as the Wall Street Journal and Financial Times have also adopted online pay schemes that include metered systems, as well as subscription-only models.

All of the companies are trying to figure out how to wring money out of readers, regardless of how they access news. Websites are still the most popular method of online access, but smartphones and tablets are becoming increasingly popular.

Companies initially believed that selling apps would be a good way to monetize news, but a Nielsen study finds that has had mixed results in the United States, where the top 25 news apps in the country are all free to download and only two require a paid subscription.

Most publishers still depend on selling advertising, however, and a recent study suggested American newspapers are earning $1 in digital advertising revenue for every $7 they lose in their print products. The Pew Research Center's Project for Excellence in Journalism studied 38 newspapers in the United States, and cited "cultural inertia" for the papers' inability to seize new revenue opportunities.

"The shift to replace losses in print ad revenue with new digital revenue is taking longer and proving more difficult than executives want and at the current rate most newspapers continue to contract with alarming speed," the report stated, adding the executives they interviewed considered replacing print revenue an "existential" issue. 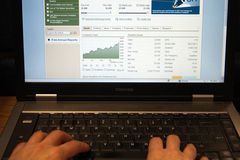