Jordan Belfort has a message for anyone who saw The Wolf of Wall Street, and walked out of the theatre wanting to emulate the character played by Leonardo DiCaprio.

"If you go to that movie and you leave thinking I want to be just like that in every way, you're crazy. You need some serious therapy," says the real-life Wolf of Wall Street.

Mr. Belfort, 51, who built a vast fortune as the head of the notorious, now-defunct Long Island brokerage firm Stratton Oakmont, says there are few redeeming things in his former life, which was depicted in the Oscar-nominated Martin Scorsese film.

Mr. Belfort spent 22 months in prison on convictions of fraud and money laundering after the firm was exposed as a boiler room that sapped investors of more than $100-million (U.S.) throughout the 1990s by manipulating penny stocks.

But even though movie audiences have seemingly revelled in the high-flying, hard-partying lifestyle portrayed in the film, based on the autobiography Mr. Belfort wrote while in prison, the Wolf says he is concerned some movie-goers won't get the point. Just as the movie Wall Street spawned a generation of Gordon Gekko wannabes in the 1980s, Mr. Belfort says he hopes young brokers don't see his early years – fuelled by drugs and ill-gotten gains – as something to aspire to.

As he rides the popularity of the movie on the professional speaking circuit, Mr. Belfort is now recasting himself as an unlikely advocate of ethics on Wall Street. "I'm not one to moralize. But what I did, people lost money, and that's not something to be proud of. It's just not. I'll never be proud of that."

After getting out of prison in 2006, Mr. Belfort has been parlaying the I-can-sell-you-anything attitude he worked to excess on Wall Street into a series of sales seminars around the world. The film has only served to boost his popularity among aspiring salespeople wanting to learn his form of persuasion, and Mr. Belfort has expanded his schedule into new countries including Canada, where he will be making his first four-city tour in May.

An undisclosed amount of income from the speaking engagements goes towards the $110-million Mr. Belfort was ordered to repay investors after his convictions, along with all of his proceeds from his two books and the movie rights. Mr. Belfort isn't forthcoming about how much of that sum he has paid down so far, in part because he insists he doesn't know. Lawyers have yet to figure out how much of the total the other senior members of Stratton Oakmont are required to pay, which will lower the amount he is responsible for.

However, Mr. Belfort remains an example of the difficulty of punishing white collar crime. The minimum security prison where he served time was akin to a country club, and Mr. Belfort continues to live a comfortable life since being released. Speaking about his upcoming Canadian tour on the phone from Beverly Hills, Calif., he says he now works twice as hard to maintain that lifestyle, since he must make monthly payments to the U.S. government to pay down his fine.

Mr. Scorsese's movie has been heavily criticized for lacking a moral. Unlike most Hollywood films, where the good guys win and the bad guys are vanquished, the final act of The Wolf of Wall Street is ambiguous. Though no longer on Wall Street, Mr. Belfort is shown as a successful motivational speaker who draws legions of pupils wherever he goes.

(Read: Jordan Belfort reveals the real answer to The Wolf of Wall Street's ''Sell me this pen' challenge)

But Mr. Belfort says there are lessons to be gleaned from his story, particularly for brokers on Bay Street and Wall Street, who might easily brush it off. When he started on Wall Street, Mr. Belfort says he was as honest as the next guy. The descent into unethical trading, such as pump-and-dump schemes and other manipulations, crept in over a span of years. It was a slow descent that took much longer than the movie suggests. It's one of the few quibbles Mr. Belfort has with the film, but he says he understands why Mr. Scorcese had to speed up the story, since his epic rise and fall had to be squeezed into three hours.

"We tend to get sucked into things slowly, insidiously, and it's so easy for it to happen. And that's the one misgiving I had. I really wish they would have shown it as a slower descent because that's more accurate," he says. "When I have to face young people, I want them to understand how slowly, in incremental steps, you start to lose your ethics. It's not all at once."

Sober since 1997, Mr. Belfort doesn't dispute his failings. Any pain he's experienced "is self-inflicted," he says. His biggest mistake – beyond hubris, greed and drug addiction – was expanding the firm too quickly, and pushing more and more questionable offerings into the market in order to fuel the machine.

He doesn't like being called a stock swindler, insisting on the past-tense. "Any time they say 'former,' I'm cool with it. I'm not a swindler right now, I'm a former swindler. We all have our own little trigger words," Mr. Belfort says.

He sees his life as a cautionary tale and a comeback story, though that is for the audience to decide. "I'm the poster child for what happens when you lose your ethics and integrity," Mr. Belfort says. "I had a gift for selling and persuasion and teaching others to sell, and I blew it. ... I understand now that success in the absence of ethics and integrity, isn't success. It's failure. And I was the world's most successful failure in that regard."

With unwavering confidence in his ability to sell, he also laments what might have been. "If I would have done things legitimately I probably would have been worth $10-billion by now." 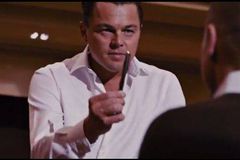 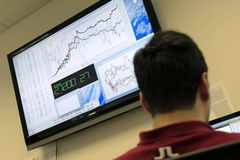