It's a balmy September evening in Zuccotti Park in Lower Manhattan. I'm standing near a tall fellow I know only as Mike from Ohio. Our left elbows are touching (in a getting-to-know-you game). We're asked what our favourite sign was from last year's Occupy Wall Street protests-slash-encampment. "If money is speech, then debt is censorship," says Mike, smiling.

The group of about 40 people has gathered to practise tactics for an upcoming demonstration. Early Monday, some of them plan to don corporate camouflage – suits, dresses – and, together with hundreds of other protesters, move as close as they can to the New York Stock Exchange. There they will sit until the police tell them to leave, or they are forcibly removed or arrested.

If you thought Occupy Wall Street had disappeared, think again. After months of internal wrangling and low morale, the campaign is staging a return to the spotlight. Sept. 17 is the first anniversary of the movement that took over a slice of downtown Manhattan for two months, spawned offshoots in cities from Toronto to Hong Kong, and coined its own slogan to direct attention to inequality: "We are the 99 per cent."

For all the energy generated by the protests, the movement never made the leap into the political mainstream. Amorphous and leaderless by design, Occupy Wall Street includes people who are pushing for radical change to the financial system but also many who believe it is simply beyond repair. Absent a set of concrete demands and common goals, it remains difficult to categorize and ineffective as a rallying point for large numbers of people.

Yet it's too early to write an epitaph. For one thing, two of the main problems the movement referenced – income inequality and the influence of money in politics – have only become more pronounced over the past year. There have also been interesting, if embryonic, things happening under the surface. Occupy-associated groups have met with U.S. regulators on financial reform, helped to fight foreclosures, supported union drives, and are close to forming their own bank.

So far, the chief accomplishment of Occupy Wall Street has been to attract media and policy attention to the broader issue of inequality, a focus that remained long after the police cleared away the tents in Zuccotti Park (which happens to be owned by Canada's Brookfield Office Properties) last November. Earlier this week, the U.S. census released data showing that median household income in the country, adjusted for inflation, fell in 2011, while a measure of income inequality increased.

Occupy Wall Street "put inequality on the political agenda in a way that simply wouldn't have happened otherwise," said Carne Ross, a former British diplomat and author who is involved in the movement. "That is an extraordinary achievement, even if Occupy never did another damn thing."

How the campaign evolves from here is an open question. It will depend in part on deliberations – themselves laborious exercises in direct democracy and consensus-building – taking place Monday in New York and in cities across the United States and Canada.

"A lot of decisions need to be made by a lot of people about where to go," said Todd Gitlin, a professor of journalism and sociology at Columbia University with a long history of activism whose book about Occupy Wall Street was published this year. "The core of the movement doesn't like the electoral process – more than doesn't like it, it's appalled by it and wants to overturn it or secede from it."

My partner in the elbow ice-breaking exercise – whose full name, I later learn, is Michael Aaron – seems to fit this category. A genial, lanky 31-year old in cargo pants, Mr. Aaron returned to the United States from Germany in May to throw himself into the Occupy cause. He taught English part-time for cash and spent six weeks this summer sleeping in the cafeteria of a Catholic school in Brooklyn, which turned into an activist dormitory, thanks to sympathetic nuns and parishioners.

"Asking a corrupt thing to fix itself is never a good plan," Mr. Aaron said, as darkness fell on Zuccotti Park. "We're not asking power to do it for us." He said he would be at Monday's protests at the New York Stock Exchange and elsewhere on Wall Street, but hoped to avoid being arrested.

If Mr. Aaron is one face of the Occupy Wall Street movement, then Akshat Tewary is a different one. A 34-year-old employment and immigration lawyer, Mr. Tewary began attending protests last September because, he said, banks had received bailouts, while "there weren't any analogous benefits being provided to the average person."

Mr. Tewary became a core member of another Occupy subsidiary, dubbed Occupy the SEC. The group met throughout the past year. In February, it submitted a 325-page letter to the U.S. Securities and Exchange Commission in response to the regulator's request for public comment on the Volcker rule. The rule is a key part of the financial reform law that aims to prevent banks from engaging in risky trading for their own benefit.

The letter combined exceedingly detailed responses to policy questions with some memorable flourishes ("the Volcker Rule simply removes the government's all-too-visible hand from underneath the pampered haunches of banking conglomerates," the authors wrote). The group later went to Washington and met with the major U.S. financial regulators and a large group of congressional staffers. Mr. Tewary said the SEC officials had clearly read the letter and posed detailed questions.

Mr. Ross, the diplomat and author, is involved with an Occupy offshoot focused on "alternative banking." Earlier this month, Sheila Bair, the former chairwoman of the Federal Deposit Insurance Corp., a major U.S. banking regulator, came to speak with the group for an hour.

In the near future, Mr. Ross said, the group plans to launch what sounds, for all intents and purposes, like a bank under the Occupy name. It will be governed by its users and staff, transparent and risk-averse, and accessible to all, he said. The group has received "tremendously good advice," he said, from people including the ex-head of Chicago's largest community bank, former regulators, and even finance professionals secretly moonlighting as activists.

"Our vision was always to establish an alternative, not just to debate it," Mr. Ross said. "We don't think Washington is capable of legislating effectively given the grotesque influence of the big banks."

Such efforts remain very, very small. Mr. Ross and Mr. Tewary say their groups rely on roughly half a dozen committed activists, although more are involved periodically. Some people working to further the Occupy cause would like to see its energy channelled into becoming a broader, more progressive force in American politics – the flip side of the conservative Tea Party.

To have a lasting impact, Occupy Wall Street will need to move well beyond its core enthusiasts. "Probably every anarchist or revolutionary in America has already signed up in some fashion," said Mr. Gitlin, the Columbia professor, and no further recruitment is possible in those quarters. "Will they become a full-service movement that offers roles and useful work for people of various types? I don't know. It's plausible."

Back at Zuccotti Park, the group is rehearsing protest tactics. A few office workers stop and listen, while the occasional tourist appears befuddled. Off to one side, five New York police officers and two private security guards monitor the group's activities.

A young woman named Sam urges the participants to remember why they're there, issuing a brief manifesto. "There are many 'yesses,' many visions of where to go from here," she says. "There is only one 'no'… the current world is not working for us." 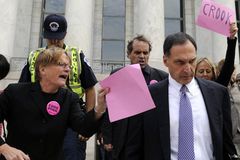 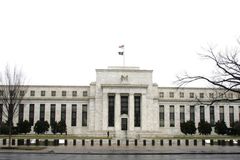 A year later, Occupy did little – and inequality only gets worse
September 7, 2012 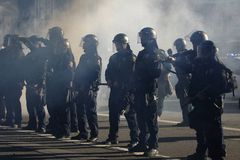 Opinion
The Occupiers leave the building
May 10, 2012 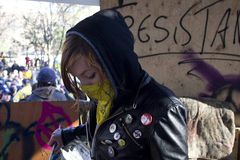