Tim Hortons Inc., a cult favourite in its Canadian homeland, is making a bigger push into the United States, betting it can win over Americans addicted to Frappuccinos and Dunkin' Donuts.

The coffee chain – whose same-store sales jumped 5.8 per cent in the United States last quarter – is opening new locations in areas such as Indianapolis, Cincinnati and Columbus, Ohio, adding to its roughly 650 current outposts.

"We've done a good job laying the foundation for growth of Tim Hortons in the U.S.," Mr. Schwartz said in an interview, declining to specify how many locations he will add. "The potential for the brand there is huge."

On a same-store sales basis, the coffee chain is growing about twice as quickly as Restaurant Brands' other major division, Burger King. That business saw North American growth of 2.8 per cent last quarter by that measure.

But moving south of the border won't be easy. Starbucks Corp. and Dunkin' Brands Group Inc. have largely cornered the U.S. coffee market, locking in millions of customers with loyalty programs and convenient locations. The chain, known to millions of Canadians simply as "Tims," also has stumbled in previous attempts to expand in the United States: It closed 27 shops in New York State and Maine in the fourth quarter because of poor performance.

In Canada, Tims is an institution. Hockey legend Tim Horton, who played for the NHL's Toronto Maple Leafs, opened his first restaurant in Hamilton in 1964 – back when doughnuts and coffee were 10 cents each. By 1967, the brand had begun franchising and adding locations.

The company is seen as the "hometown hero," said Bill Chidley, partner at brand-consulting firm ChangeUp in Dayton, Ohio.

"Americans just don't have the same emotional connection to the brand," he said. "You just can't wave a magic wand and bring that to this market – you need something more compelling."

Since the 1984 debut of its first U.S. store in Tonawanda, N.Y., the chain has had fits and starts. In the 1990s, Wendy's bought Tim Hortons and tried to make it work in the United States.

Wendy's later spun off the chain after facing pressure from shareholders such as Bill Ackman. Tims, which held an initial public offering in 2006, made other attempts to curry favour with Americans, including co-branded shops with Cold Stone Creamery.

It then was acquired by Burger King in 2014, part of a deal the burger chain used to form a new parent company with a Canadian headquarters. The $11-billion (U.S.) transaction, backed by Warren Buffett's Berkshire Hathaway Inc., created Restaurant Brands International, which is based in Tim Hortons' long-time home base of Oakville, Ont.

Restaurant Brands is controlled by billionaire Jorge Paulo Lemann's 3G Capital, which previously teamed up with Mr. Buffett to take H.J. Heinz Co. private and has a famous zeal for cost cutting. Since the takeover, Tims has eliminated jobs at regional offices and corporate headquarters.

In making a bigger play for Americans, Tims is eyeing the growing share of budgets that go toward java. Coffee-shop sales growth are outpacing those of burger joints, according to data from research firm Technomic. The United States also is the world's largest coffee-consuming country.

"Coffee and fast casual – those are the two areas of the restaurant industry that are growing the fastest," Bloomberg Intelligence analyst Michael Halen said. "There's definitely potential."

The coffee chain is touting its coffee and food items, such as Nutella-filled pastries and savoury items such as new grilled wraps, to attract U.S. customers. But with so many options at Starbucks, Dunkin' Donuts and regional coffee chains, it's going to be hard to stand out, Mr. Chidley said. Krispy Kreme Doughnuts Inc. also is stepping up efforts to improve its restaurants and compete with Starbucks.

Creative menu items aren't going to make up for Americans' lack of a connection to Tim Hortons, Mr. Chidley said.

"They're not something that when it's built you think, 'Oh my gosh, I've got to try that.'" 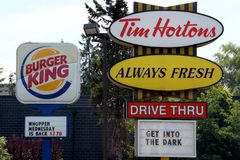 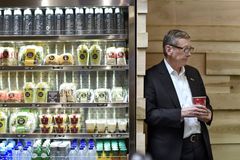