President Donald Trump's nominee for United States Trade Representative is vowing to end the long-running softwood-lumber dispute with Canada – whether by cutting a deal or fighting it out in trade court – and take Ottawa to task for not cracking down on counterfeit goods destined for the U.S.

In a clear signal of the new administration's bilateral priorities, Robert Lighthizer told his Senate confirmation hearing Tuesday that softwood is "at the top of the list." He said he recognizes that American companies want "quantitative restraint" – a limit on Canadian lumber entering the United States. "It is a very serious, intractable sort of problem. It has enormous political consequences on both sides of the border," he told the Senate's finance committee. "We have to have a new [deal]: Either litigation or a new agreement that does work."

Mr. Lighthizer did not specify whether softwood would form part of the larger talks over the North American free-trade agreement, which Mr. Trump has vowed to renegotiate with Canada and Mexico, or if it would be handled in a separate round of bargaining.

Explainer: What's going on with NAFTA? A guide

Adam Radwanski: In Donald Trump's world, Canada has to embrace the chaos

He said he had the backing of many senators for taking on the issue.

"I've had a variety of issues with respect to Canada that had been raised by senators that I've gone around and spoken [to]," he said. "And, certainly, this is at the top of the list."

The President is starting to push forward his promised overhaul of trade, meant to favour American companies and crack down on countries that he alleges treat the United States unfairly.

Mr. Lighthizer, a lawyer and former political staffer who served as deputy trade representative in Ronald Reagan's White House, said he agreed with Mr. Trump's "America first" policy on trade, and that the country "can do better in negotiating our trade agreements."

He also promised to take Canada to task over its failure to stop counterfeit goods from flowing through the country. Senator Orrin Hatch asked Mr. Lighthizer if he would be demanding that Ottawa enforce intellectual-property laws on "in-transit cargo" – goods passing through Canada from a third country en route to the United States.

"Absolutely … I'm totally committed," he replied, vowing to "bring every action that we can, that's justified, across the board."

The softwood fight involves complaints by U.S. lumber companies that their Canadian counterparts pay below market rates to cut down trees because Canadian forests are largely owned by provincial governments. The U.S. companies contend this constitutes a subsidy that gives Canadian firms an unfair advantage.

The U.S. government has in the past hit back by imposing import duties on Canadian timber. The dispute has been litigated in trade courts and the two governments have previously reached agreements to limit Canadian lumber coming into the U.S. market.

The most recent deal expired in 2015 and the U.S. government is expected to decide this spring what to do next, which could lead to duties on Canadian lumber.

In a bid to head off open warfare, the British Columbia government has appointed David Emerson, the former federal trade minister, to help reach an agreement. Mr. Emerson could not be reached for an interview Tuesday. In a conference call with reporters last week after a trip to Washington, he said Canada prefers a negotiated settlement to a court fight.

"I conveyed to the people I met with that British Columbia, as much of the rest of Canada, is not anxious to take a long, costly damaging [litigation] process," Mr. Emerson said. "We would like to see softwood lumber resolved in a more reasonable, fact-based framework."

"Obviously, we disagree with Mr. Lighthizer's comments that Canadian lumber exports need to be restrained, but agree that a new agreement on softwood lumber trade between Canada and the U.S. is needed," he wrote in an e-mail.

Harry Nelson, who teaches in the faculty of forestry at the University of British Columbia, said Canada has cause for worry about Mr. Trump's intentions.

"I'm greatly concerned. What happens now or over the next few months could have a significant impact on the forest sector in B.C.," he said. "I do expect the Americans to be much more hardline. It kind of plays into Trump's negotiating style, which is 'We have you over a barrel.'"

Zoltan van Heyninge, a spokesman for the U.S. Lumber Coalition, wrote in an e-mail that the U.S. industry "welcomes the comments by USTR nominee Robert Lighthizer, and strongly supports his nomination."

Senator Ron Wyden, a Democrat from Oregon who regularly advocates for U.S. lumber interests, argued during Mr. Lighthizer's hearing that Mr. Trump has actually been too soft on Canada on the issue.

"It was unfortunate that the President missed an opportunity when Prime Minister [Justin]Trudeau was here, when he said 'Gee, all we need with Canada is a tweak,'" he said, referring to softwood as the "longest-running battle since the Trojan War."

The Trojan War which, according to Homer, lasted 10 years, went on for less than a third the length of the softwood-lumber dispute. 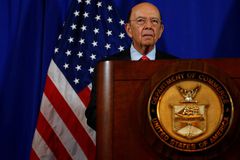 Trudeau slams proposed border tax, stresses importance of Canada–U.S. trade relations
Subscriber content
March 9, 2017
Follow Adrian Morrow and Sunny Dhillon on Twitter @adrianmorrow @TheSunnyDhillon
Report an error Editorial code of conduct
Due to technical reasons, we have temporarily removed commenting from our articles. We hope to have this fixed soon. Thank you for your patience. If you are looking to give feedback on our new site, please send it along to feedback@globeandmail.com. If you want to write a letter to the editor, please forward to letters@globeandmail.com.
Comments