The U.S.-China climate deal will put pressure on Prime Minister Stephen Harper to make greater progress on reducing Canada's greenhouse gas emissions as he heads into an election year.

In a deal announced late Tuesday, President Barack Obama and Chinese President Xi Jinping committed their two countries to targets that would see the Americans cut their GHG emission by 26 per cent from 2005 levels by 2025, and fast-growing China halt the increase in its emissions by 2030.

The bilateral agreement from the world's two largest emitters will pressure other countries to deepen their climate commitments as the international community works towards a global treaty to be concluded at the United Nations summit in Paris next year. It raises particular challenges for Mr. Harper, who has consistently tied his government's climate ambitions to those of the United States, arguing the two major trading partners must move together.

However, Canada is currently well short of hitting its 2020 target to reduce GHG emission by 17 per cent from 2005 by 2020. The U.S. has a better chance of hitting that goal as its coal-fired electricity system switches to natural gas, and President Obama looks to accelerate the trend with new regulations from the Environmental Protection Agency.

UN climate chief Christiana Figueres has asked all countries to submit post-2020 emissions targets by the end of March 2015. She said Wednesday that the U.S.-China deal could provide important momentum as countries prepared to gather in Lima later this month for the 2014 summit, which must make major headway if an agreement is to be included in Paris.

The joint statement comes in the wake of the European Union's announcement to cut emissions by at least 40 per cent by 2030 which it made last month.

"This positive momentum opens the door for all major economies and in particular all other industrialized nations to bring forward their contributions to the Paris agreement in a timely fashion over the coming months," Ms. Figueres said in a statement from Berlin. "Investors have long called for policy certainty. Today's announcement is a firm and positive step towards that as we look towards Paris 2015."

But it raises serious challenges for Mr. Harper, who has portrayed progress on climate change as a threat to economic growth.

"All of our political and policy framework has been around keeping pace with the Americans, and that was fine when the American ambition was modest," said David McLaughlin, an adviser at the University of Waterloo's school of environment. "But alignment with the U.S. just got a lot tougher and more complex."

Mr. McLaughlin said the U.S.-China deal – and looming negotiations in advance of the Paris summit – will ensure climate and energy are prominent issues heading into an election campaign expected no later than October 2015.

Mr. Harper has long demanded that China and other emerging economies agree to tough targets in order for Canada to sign on to an international agreement. Environmentalists argue the U.S.-China accord removes any rationale for Mr. Harper stalling on tougher action here.

"This move by the world's two largest polluters takes away the Harper government's main excuse for their inaction on climate change," said Keith Stewart, climate campaigner for Greenpeace Canada. "If our government continues to act as a cheerleader for the global oil industry, Canada risks being left behind politically and economically as the rest of the world steps up the fight against climate change by moving on to cleaner energy."

Mr. McLaughlin noted that President Obama has thrown down the gauntlet to Republicans who now control both house of Congress and have vowed to blunt his effort to have the EPA impose new regulations on the coal-fired power sector, and who have climate skeptics serving as key committee chairs.

In an earlier version of this story, it was stated that the Americans would cut GHG emissions by 26 per cent from 2005 levels by 2020. It is, in fact, 2025. This version has been updated. 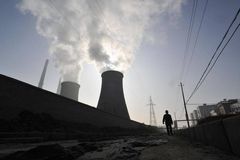