Natural disasters triggered by climate change are increasing in frequency and hitting farmers in the developing world especially hard, threatening food security and employment in the poorest regions, the United Nations said in a new report.

The UN Food and Agriculture Organization (FAO) report, called Impact of Disasters on Agriculture and Food Security, was released Thursday, four days before the official start of the Paris climate-change conference, where the developing world will seek hundreds of billions of dollars in funding from wealthy countries to adapt to, and overcome losses from, potentially catastrophic climate change.

Concerns that climate-related losses could rise were reinforced on Wednesday, when the World Meteorological Organization reported that 2015 is on course to be the hottest year on record, and the years from 2011 to 2015 the warmest five-year period on record.

The FAO report is one of the first large-scale studies to focus on climate change and agriculture losses. It determined that the number of natural disasters caused by climate-related events and other natural hazards have almost doubled since the 1980s. Between 2003 and 2013, the losses from the natural disasters were estimated a $1.5-trillion (U.S.). In the developing world, the crop, livestock, fisheries and forestry sectors alone absorbed 25 per cent of the climate-related losses.

In the case of drought, over 80 per cent of the damage and losses in the developing world were absorbed by the agriculture sector, especially livestock and crop production.

Drought in sub-Saharan Africa, where fully one-quarter of gross domestic product is related to agriculture, has been especially widespread and highly damaging, the FAO said. In the 1980s, about 90 million sub-Saharan Africans were affected by drought as severe water and moisture shortages developed in Kenya, Uganda, Djibouti and elsewhere. The number grew to more than 130 million affected people by the last decade.

The FAO's "conservative estimate" of drought-related livestock and crop production losses in sub-Saharan Africa between 1991 and 2013 was $30-billion.

In an interview, Stephan Baas, the German FAO official in Rome who was the co-ordinator of the FAO report, said damage from climate change, especially in sub-Saharan Africa and southeast Asia, threatens food security in the developing world. But he does not think the hard-hit countries should try to protect themselves by becoming food importers – that is, relying on other countries such as Canada, where food production is secure and can easily be dialled up and down – to feed themselves.

"We should maintain agriculture and food production in those areas or we'll see bigger refugee and migration flows than we're seeing currently," he said. "There are 2.5 billion people involved in agriculture worldwide. If they moved en masse out of agriculture, where would they work?"

Climate-change skeptics would dispute claims that relentlessly higher atmospheric carbon dioxide emissions are behind the rise in natural disasters, such as drought.

They argue that no single natural catastrophe can be specifically pinned on climate change as opposed to natural environmental cycles, such as El Nino and La Nina, the periodic cool-warm temperature fluctuations between ocean and atmosphere in the southern ocean.

But the UN argues that the rising frequency of natural disasters cannot be divorced from man-made climate change. The global reinsurance companies, including Munich Re and Swiss Re, keep extensive databases going back decades that show that the number of weather-related disaster is rising in lockstep with CO emissions.

Munich Re's database shows that the annual number of significant losses from meteorological, hydrological and climatological events, including storms, floods, droughts and forest fires, was typically 500 to 600 from the 1980s into the mid-1990s. They have since soared, reaching about 800 a year in the last decade. In 2014, about 900 such events were recorded. Meanwhile, non-climate-related events such as earthquakes and volcanoes, have stayed fairly even, at low levels.

The FAO is recommending more investment in sustainable and resilient agriculture to overcome the losses from climate change, ranging from flood controls to the development of drought- and salt-tolerant crops. It notes that a mere 0.4 per cent of global official development aid in 2010 and 2011 was devoted to disaster risk reduction.

At the climate change conference in Paris, developed countries will be asked to keep funnelling billions of dollars to the developing world to help finance climate mitigation and adaptation measures.Earlier this week, Todd Stern, the United States special envoy for climate change, who will be leading the U.S. negotiating team in Paris, said "we certainly see robust financing continuing." 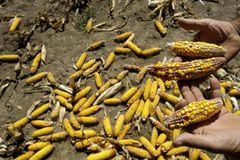